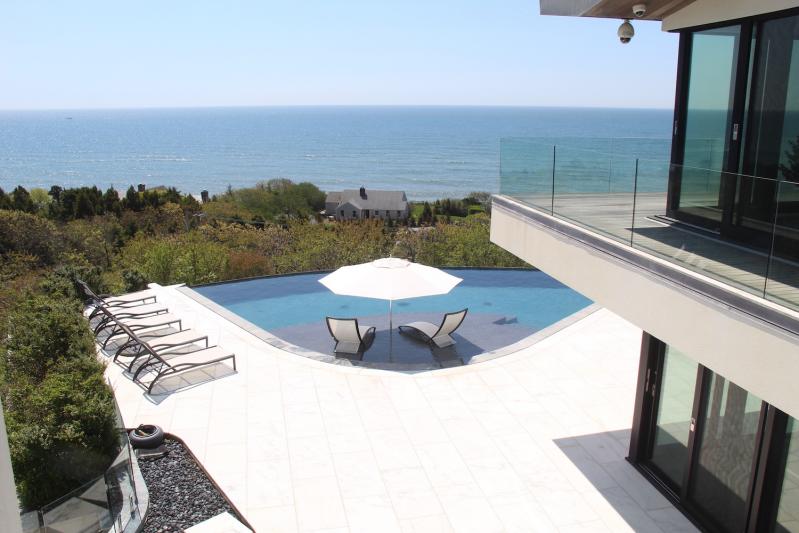 What's wrong with this picture? A six-bedroom, six-plus-bathroom, oceanfront Montauk house, with a 45-foot-long heated, saltwater gunite pool with a waterfall edge, top-of-the-line kitchen appliances, a butler's pantry, and a wet bar, is listed on Airbnb for $2,500 a night?

The answer, according to Brett Benza, who owns the house: "My house doesn't rent for that price." The luxurious 7,300-plus-square-foot Montauk house that he built in 2015, "goes for $10,000 a night. And I would never rent it through Airbnb." Mr. Benza, who lives in Miami Beach, Fla., is a financial services industry veteran who founded EazyO, a beach food-ordering app, in 2015.

As the summer house rental gold rush gathers momentum, so, too, do professional con artists on sites such as Airbnb, where they create scores of fake accounts, fake listings, and fake reviews to scam local law enforcement and the guests looking for deals on the platform.

That's exactly what happened with Mr. Benza's house, now listed with Douglas Elliman Real Estate, to buy or rent. (To buy: $14.5 million. To rent for the year: $1.2 million; it's already been rented for the summer.) About a month ago, his real estate broker called to ask why Mr. Benza had listed his house on Airbnb. He had not.

Checking the vacation rental site, he saw his house offered under the title "Best Ocean View House in Montauk." Photos from the Douglas Elliman listing, as well as their descriptions of the house, had been used to create the Airbnb post, in which the owner of the house was called Michelle. When he checked the property's availability calendar, it appeared that certain dates had even been booked.

He contacted Airbnb immediately, first through the frustrating virtual chat box, and then via emails to customer service representatives, demanding that they take the fraudulent listing down. But he got nowhere.

"So, I decided to play fire with fire," he said. He created a pseudonym — Bobby Fortune — and went through the motions of booking his own home on the website to see where that would lead.

It led to "Michelle," who, after confirming that his desired dates were available, offered Mr. Benza a discounted rate on the nightly price, if he'd be willing to circumvent Airbnb and send the payment straight to her husband's bank account instead.

Mr. Benza shared his email correspondence with Michelle with The Star, offering a glimpse at how the scheme unfolded. It even included a legitimate rental agreement.

"Dear Mr. Bobby Fortune. Please find attached Rental Agreement for your rent of 15 night from June 15th 2022 to June 30th 2022. Please arrange payment of the $6,000 deposit to the following Zelle account to confirm your booking once the Contract is Signed," she wrote in an email.

The Zelle account was for her husband, Galib Qureshi, she explained, and then sent another email: "Can you proceed with the payment now. Also I want to let you it is okay if you would like to make the payment two times because I know the Zelle daily limit can be a hustle sometimes."

Airbnb does post this warning alongside each listing: "To protect your payment, never transfer money or communicate outside of the Airbnb website or app," and offers guidance on what to do if asked to pay off-platform.

However, according to Mr. Benza, it offers no help to homeowners who might be on the receiving end of fraudsters' schemes. So, he sent an angry email to Airbnb's C.E.O., Brian Chesky.

"I have given your team 10 days to remove this listing," Mr. Benza wrote in the email. "It is a fraud as I am the owner of this property. I have had people driving up to the house and telling me they are renting it this summer. I have filed a police report with the Montauk [police precinct] and filed an F.B.I. IC3 [internet crime] complaint. At this point you need to intervene and get this off your website."

It remained on the website. So, next, he decided to post the same fake listing on Airbnb, with the words: "This is a scam," on it to warn potential renters.

Last week, however, he said he received an inquiry to rent his place on Airbnb, despite the warnings on the post. Mr. Benza believes that it could be the original people who ran the fake ad, trying to find out who was behind the new one.

Eventually, all listings of his house were taken down, but Mr. Benza remains concerned that people might show up this summer, claiming to have legitimately rented his place.

For that reason, on April 20, he called the East Hampton Town Police Department's Montauk precinct to file a complaint, while he was still in Florida. This week, he returns to Montauk and will file it in person.

The reasons for telling his story, he said, were twofold: "The community should know about these scams because it could happen to anyone." He also wants people to know "that Airbnb isn't protecting its users."

Then, he added, "My father, Al Benza, was a decorated N.Y.P.D. detective. I hate criminals."