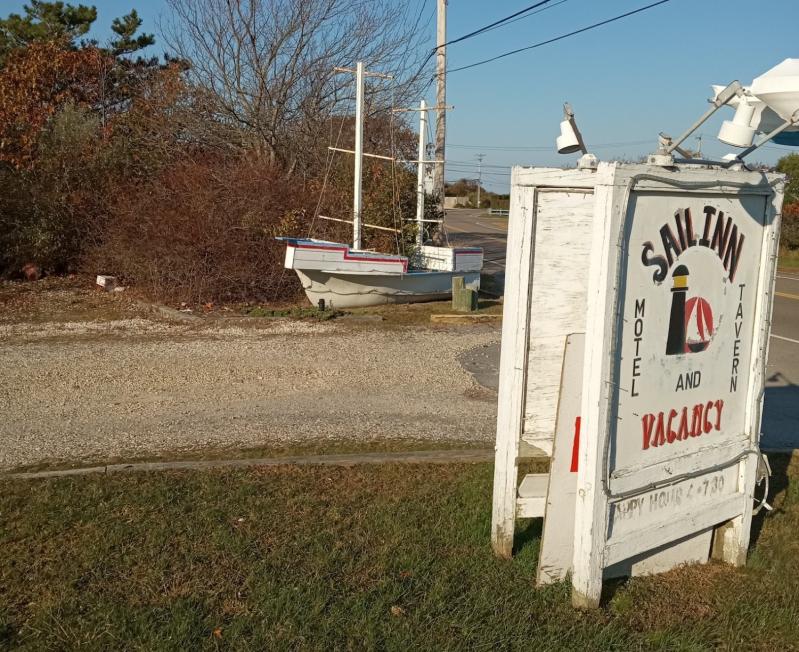 The sign and the boat planter will remain, the new owners said.
Tom Gogola
By Tom Gogola

The Sail Inn in Montauk’s dock area has been sold for $4.65 million to the mother-son team of Colleen Croft and Luca Guaitolini. The new owners, who also own the upscale Upper East Side restaurant Elio’s on Second Avenue, told The Star this week that — praise the mozzarella sticks and pass the pool cue! — they are not planning to go luxe on the longtime locals’ joint at 548 West Lake Drive when it reopens in the spring.

“I don’t want people to expect Elio’s East,” said Ms. Croft. “We very much wanted to keep the Sail Inn as the neighborhood place — we’re not going to make changes to the bar, other than to clean it up. There was some” — she paused before adding, with a chuckle — “deferred maintenance.”

Ms. Croft, who owns a house in Montauk and has been a regular presence in the hamlet for three decades. praised the former owner, George Gallaway, to high heaven for keeping his “traditional Montauk” business in operation for more than three decades, even as the “Hamptons crowd” started to arrive in force.

The mother-son duo will keep the name, the hand-painted signage out front, and the half-dilapidated old lit-up boat-planter that stands at the entrance to the parking lot like some sagging local who’s had a little too much.

“We have some history to protect here,” Ms. Croft said, ticking off several other Montauk businesses that remain ruggedly family-run despite recent changes in the character of the hamlet, among them Gosman’s, the Dock, and Uihlein’s Marina.

She and her son would make every effort to “keep as many people who’ve been working at the Sail Inn, continuing to work there,” she said, adding that they may designate two of the 10 hotel rooms for worker housing. The pool table’s not going anywhere either, she said.

The new owners will continue to run Elio’s, whose namesake, her former husband, Elio Guaitolini, died in 2016. A New York Times obituary said his restaurant, like Elaine’s not far up the avenue, was known as “an informal clubhouse for Manhattan’s social and media elite.” (Some would argue that Montauk, once known as a middle-class-friendly drinking town with a fishing problem, now fits the same description.) Lower-end price points on Elio’s menu, say $18 for an anchovy appetizer, more or less begin where the top-end dishes at the Sail Inn ($21 for a shell steak entree) ended.

When it comes to the Sail Inn’s menu, said Ms. Croft, who delivers fish from Gosman’s to Elio’s each week, she and her son “absolutely will be using local fresh ingredients in whatever we make, but it will be tavern food, bar food. Luca and I need to discuss that further, but it’s what you’d want to have in the summer while you’re having some draft beers in the harbor area.” She is now in the process of securing a liquor license. “Our focus is that it’s a bar and that it’s a great bar,” she said.

Elio’s opened in 1981. Its clientele has provided New Yorkers with a fair share of Page Six New York Post moments. Sarah Palin, for example, dined there in July sans mask or a Covid vaccination and got the virus two days later, the paper reported with glee.

Mr. Guaitolini later described the Palin incident as an “unfortunate oversight” and stressed that the restaurant had been in strict compliance with New York City Covid protocols. He was not at Elio’s at the time the former Alaska governor and vice-presidential candidate had dinner there, he noted.

Her son was on an out-of-state boar-hunting trip and unavailable for comment for this story, but Ms. Croft relayed something he’d said to her when they were in negotiations with Mr. Galway about buying the Sail Inn. “He said, ‘you know Mom, if George were to come back here in 10 years, he would see a lot of his regulars, a lot more younger people, and everyone would have respect for what George had created here. ’ ” The sale was finalized in late October.

According to online broker listings, Mr. Gallaway, 72, built the Sail Inn and opened it in 1986. This reporter’s late father held the lease there in the 1990s.

A 2007 New York Times article about Montauk headed “Not the Hamptons. Yet” featured an interview with Mr. Gallaway, who was then listing it for sale at $3 million.