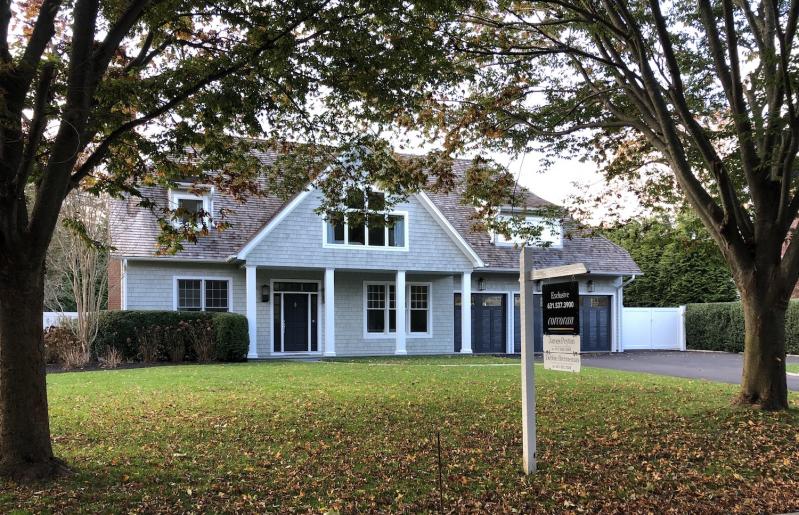 The surge in housing demand created by Covid and urbanites’ desire to have a safe retreat outside of the city has finally started to cool, according to the most recent report by Town and Country Real Estate. Rising interest rates and the rising cost of renovations due to a tight labor market and inflation are playing a role.

However, every real estate agent who spoke with The Star agreed that the “Covid market” was unsustainable, and a reversion to the historical trend of growth was bound to occur.

Hamptons home sales for the third quarter “are just beginning to show signs of weakness from the geo-political issues, regional issues, and concerning financial market swings,” reads the Town and Country report. Eleven of the 12 markets the agency monitors showed a slowdown in the number of home sales. Only Hampton Bays showed a small increase.

“I would label 2022 the 180-degree year. A year ago, we were in the middle of the Covid wave,” said Judi Desiderio, a licensed real estate broker and C.E.O. of Town and Country. “It was cresting but we weren’t feeling it would break. Summer was a whole discussion about inflation and rates, which makes the demographic of our buyer, who largely comes from the world of finance, take pause.”

Ms. Desiderio said that in 2018 and 2019, buyers were quiet, waiting for an opportunity to buy. “In early 2020, we had deals falling apart. When people realized Covid wasn’t going away, they flocked to safe havens.” The Hamptons, she said, isn’t just a safe haven though. “ ‘East End dirt’ is a great investment vehicle.”

Inflation could play a role with the cost of renovations, but no clear trend was apparent. “With Covid, people lost their appetite for renovating,” said Rebekah Baker, a licensed real estate broker with Sotheby’s International. “There was a sense of, ‘I need something now and I need to move in. I will pay for it to be turnkey.’ Delays for appliances and housing materials brought on by Covid scared people who didn’t want to get stuck not being able to use a house.”

“Now I’m working with people who are willing to do work again,” said Ms. Baker, a broker since 2008. “People are more thoughtful about looking at properties. The competition to buy is less. Prices haven’t really gone down. Historically, what happens in the Hamptons when the economy gets shaky is that transactions slow down, but pricing doesn’t fall much. Most people can afford to hold onto their houses.”

“In March or April, buyers were still jumping,” said Diane Shifman, a licensed sales associate with Compass. “By August, the frenzy was coupled with some hesitation. Buyers started doing more due diligence. They started to care more about the condition of the property. Needing work is a different undertaking. The price of materials is going up and people are thinking about the cost.”

One of the main real estate stories of the last couple of years, not just on the South Fork, but nationally, has been a lack of inventory. Ms. Shifman, a broker since 2008, hasn’t seen that change much.

“I haven’t seen a significant increase in inventories. Things are sitting a little bit longer on the market. We got used to this fast-paced turn. But if we have a listing for three, four, or five months, that’s okay. We have to accept the change and realize that’s what it used to be. The huge spike we had has to level off to where it would have been had we not had this crazy market brought on by Covid.”

Laura White is an associate broker with Saunders. She started selling real estate in 1983. Her four decades of experience give her useful perspective regarding the interest rate environment.

“Historically these rates are normal. New buyers and young buyers got accustomed to artificially low rates during Covid. In the late ‘80s when rates were hovering around 10 percent, things were still selling.” This week, the 30-year mortgage rate ranged around 7 percent.

“It was ridiculous you could borrow money at 2 or 3 percent,” agreed Ms. Desiderio, herself a veteran broker with 37 years in the business. “As long as it’s below 10 percent, you can live with it.”

“It’s certainly not as busy as it was six months ago, or even four months ago, but there is still a lot of activity,” said Pattie Romanzi, the president and C.E.O. of the ParEast Mortgage Company in East Hampton. “A good property comes on the market and there’s still several people who want it.”

Because inventory remains low, she notices that “people are still offering over asking price, even with the higher interest rates. It’s surprising, but it’s still happening.”

Eighteen percent of the loans ParEast handled in 2021 were investment loans. “A lot of real estate is being sold to conglomerates,” she said. “We can only hope that all these investors have to sell because they’re not going to get their rents anymore and the houses go back into inventory for families to buy.”

Last year, “was our best year in 15 years and most of it was refinancing because of the low rates, but with rising rates, the refinance market has stopped now,” Ms. Romanzi said.

Ms. Desiderio said interest rates had a negative impact not because of added mortgage cost, but because they negatively impact her clients’ businesses and stock portfolios. “They have less borrowing power to grow their businesses. It impacts their psychology. They feel less rich.”

“The higher end market is at a standstill,” said Ms. White. “Buyers are willing to wait. They’re not concerned about rates; they’re more looking for a drop in prices. There’s a little gap right now in expectations between what the buyers expect to pay and sellers’ willingness to move down.”

She said the “low end” which, on the South Fork, is roughly defined as houses that are selling for under $2 million, is still busy. “Half of the houses that moved into contract in the last two weeks were below $2 million. I was surprised because I thought the lower end would be dead with interest rates rising but I’m not seeing that.”

After watching the market cycle for 40 years, Ms. White was hopeful. “There’s still pent-up demand for homes out here. I think we’ll have a good spring.”

“In the last couple of years, every single house that had 15 offers, 14 didn’t get it. Those buyers are still out there,” agreed Ms. Shifman.

“It’s important if buyers are interested in something that they make an offer,” said Ms. Shifman. “That’s what will open up a conversation.” She cautioned however about making a disrespectfully low offer assuming a market drop. “There’s a respectful low offer and an obnoxiously low offer. Ten percent below ask is respectful. If you go too low, it closes a door and ends the conversation.”

Markets are historically driven by fear and greed. While no one wanted to make a specific prediction about the future, Ms. White hinted that fear could still drive sales on the East End, citing the 2024 election.

“People still have fears that they need to escape civil unrest or virus issues. I had someone tell me recently they need to be in by next summer, because they want to be safe by the next election cycle.”

Ms. Baker hoped for a return to normalcy. “You want buyers to make thoughtful decisions. When everyone is aggressive, it’s not that much fun, except for maybe the seller. It’s less intense now and hard to predict what will happen,” she said. “Now after Covid, I’m kind of interested to see if we go back to our older rhythms. If so, by Presidents’ Day it could pick up again.”