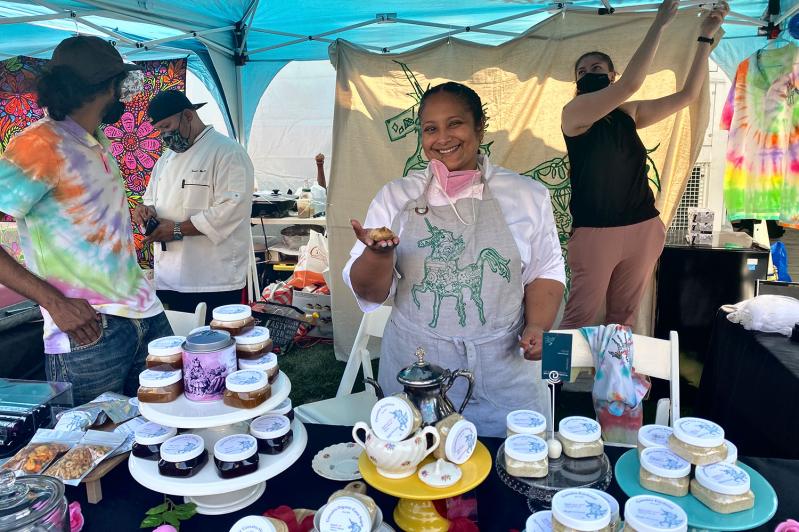 Charlene Ali-Barreto, the owner of HiFive Edible Wonders, a line of CBD-infused pantry staples, set up shop at the Hampton Cannabis Expo on Sunday.
Jamie Bufalino
By Jamie Bufalino

Cannabis industry entrepreneurs including Barre Hamp, a member of the Shinnecock Indian Nation who is overseeing the development of a marijuana dispensary on tribal land in Southampton, foresee a boom in cannabis businesses following New York State's legalization of adult recreational use, they said at the Hampton Cannabis Expo in East Hampton on Sunday.

"Pardon the pun, but the East Coast is about to light up," said Jeffrey Finkle, the chief executive officer of the Arcview Group, a firm that provides venture capital and consulting services for cannabis companies. "It's going to be the next epicenter of the cannabis industry, no question about it."

New York, New Jersey, and Connecticut legalized adult recreational use this year, but only New Jersey has thus far followed through on establishing a regulatory commission and adopting rules for the cultivation, manufacture, and sale of recreational cannabis. New York's law, which went into effect on March 31, allows public possession of up to three ounces of cannabis or 24 grams of oils or other concentrates, and permits marijuana to be smoked in public wherever smoking tobacco is allowed.

The law established the framework for a Cannabis Control Board, which will develop regulations for retail dispensaries, cafes for on-site consumption, and cultivation, but no one has yet been appointed to the board. Former Gov. Andrew M. Cuomo was "slow-walking" the appointments, said David Feldman, a co-founder of Skip Intro Advisors, a Westhampton management consulting firm. Gov. Kathy Hochul, on the other hand, "is significantly more receptive to getting the program off the ground," said Jeff Schultz, a law partner at Feuerstein and Kulick who advises cannabis companies. He anticipated that Ms. Hochul would make appointments within the next few weeks.

The law gives municipalities until Dec. 31 to opt out of permitting retail dispensaries and on-site consumption licenses. If they opt in, they cannot opt out in the future, but if they opt out, they can opt in later. Riverhead became the first East End Town to pave the way for such licenses, when it rejected a proposal to opt out on July 7. At a meeting in May, the East Hampton Village Board decided to wait to see how other municipalities handled the matter before making a decision, and the Sag Harbor Village Board has not yet addressed the issue, said Mayor James Larocca. The Southampton and East Hampton Town Boards are still discussing the matter. "While I understand that producing this product locally for local sale or consumption is probably good for the local economy, I wouldn't want to see all farmland converted from food production to something that's more a recreational resource," said East Hampton Town Supervisor Peter Van Scoyoc at a board meeting last month, while also acknowledging that much of the cultivation may take place in more controlled indoor environments.

State and local governments may be dragging their feet, but those seeking to make a killing in the cannabis business are already poised to pounce.

Mr. Hamp said the Shinnecock Nation plans to open a "world-class" 5,000-square-foot dispensary and an associated 2,500-square-foot wellness center within the next six to eight months. The nation has partnered with Conor Green, a firm that specializes in financing and developing tribal cannabis projects, and has selected Tilt Holdings, a company that provides technology, cultivation, and production services, to operate the facility. The tribe turned to the large national firms, Mr. Hamp said, "to cut the learning curve and to be major players on an international stage, because yes we're going to start in Southampton . . . but we want this to be an international brand." Tilt Holdings has agreed to train tribal members so they can eventually take over the operation, Mr. Hamp said. "We wanted to be the tribe that kicked the doors in in New York to make a level playing field and balance it for all other minorities," he said. "We believe in this plant and the healing capacity of it, and we want to spread that not just in our community but in the community of Long Island and the cannabis community."

"The gold rush is on," said David Falkowski, the owner of Open Minded Organics farm in Bridgehampton and CBD retail store in Sag Harbor, and one of the first licensed growers of industrial hemp in the state. "But without a Cannabis Control Board, there's still a lot of questions. People are buying the pickaxes and the wheelbarrows, but they don't know which mountain to dig in."

Ryan Andoos, the owner of the Route 27 Hempyard farm in Moriches, started growing hemp three years ago, and is eager to get a license to cultivate marijuana. After a period of trial and error, he has become adept at growing hemp, he said, and has recently installed a light-deprivation greenhouse that tricks the plant into flowering earlier than usual. The controlled environment provides a crop of better quality, he said. Mr. Andoos also grows hops, and neither he nor Mr. Falkowski believes there's a risk that the region's farmland will completely transition from food production to marijuana cultivation, mainly because the state will limit the number of licenses and acreage allowed to grow marijuana, and because most of the cannabis plants will be grown indoors.

"You can grow a lot of THC on small acreage," said Mr. Falkowski, referring to the psychoactive element of cannabis. "If I got a license to grow marijuana, I'd be growing on fewer acres than I am with hemp."

Charlene Ali-Barreto, a chef, entered the cannabis business with HiFive Edible Wonders, a company that makes pantry staples such as salt, sugar, olive oil, and honey that are infused with CBD. "No one was treating it as an ingredient rather than an additive," she said. "You can use these products in all cooking." Ms. Ali-Barreto would like to incorporate marijuana into her creations, but she's waiting on the state to provide guidelines. "In Albany, we're at a standstill, but our new governor has said the regulatory board will be in place soon," she said. "Once that happens, then we will know how to structure our business."

There are many avenues other than cultivation and retail sales to make money from cannabis, noted Eddie Armstrong, the chief executive officer of the Cannabis Capital Group, a consulting and advisory firm. "There are a lot of opportunities in ancillary businesses such as hydroponics, transport, lighting, and delivery services," he said. For those looking to enter the industry, he said, "I encourage you to get on the plane now, because the wheels are up."

Inspired by the success of other Long Island-based brands, including Tate's Bake Shop in Southampton and Blue Point Brewing Company in Patchogue, that were acquired by international companies in multimillion-dollar deals, Devin Kennedy, who previously worked in advertising and marketing, moved from Los Angeles to Long Island to take advantage of the cannabis boom. "While the West Coast is very well established and some would say saturated with cannabis brands, there will be a need for a beloved brand here," he said. Three months ago, he launched Fire Island Florist, a company that offers cannabis-related lifestyle products such as T-shirts, mugs, tote bags, and has recently branched out to offer flowers delivered in glass bongs billed as "reusable vases."

"We're establishing ourselves in the cannabis biz without actually touching the plant," he said.