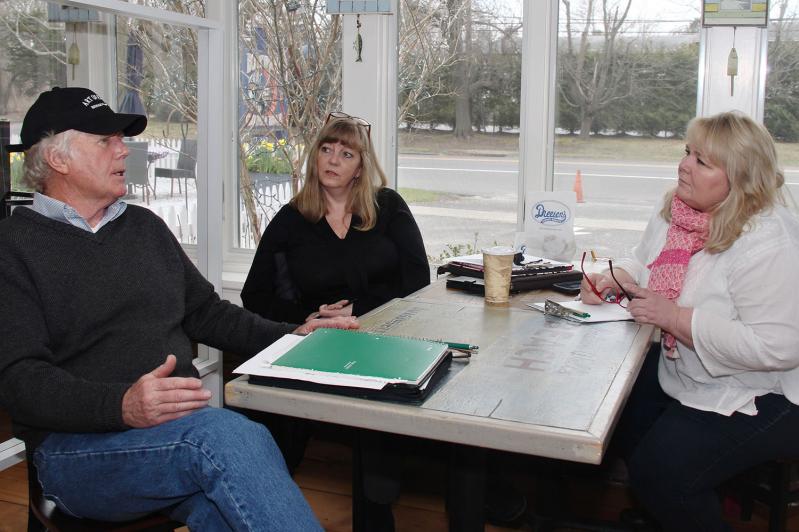 John Kowalenko, left, a co-owner of Art of Eating, Christina DeSanti of Dreesen's Catering, and Debbie Geppert, director of catering for Bostwick's, have sent a letter to state officials pleading for help for their industry.
Durell Godfrey
By Christine Sampson

Local catering companies are walking a dangerous edge. Another season like last year and some say they are sure to go out of business. That is the main point that they are trying to drive home with state lawmakers. And time is running out for them to take on work in the summer of 2021.

New York State public health rules still limit private, indoor gatherings to 10 people and outdoor gatherings to 25. As of tomorrow, wedding venues and catering halls will be allowed to have up to 150 guests indoors and 500 outdoors with certain testing and tracing protocols in place. The idea, of course, is that Covid-19 spreads among people in close proximity to one another. But on the East End, a large number of private properties are expansive estates that could accommodate more than 10 or 25 people, and do so safely.

About a dozen caterers and wedding vendors, along with peers in the event planning fields, have appealed to State Assemblyman Fred W. Thiele Jr. for help.

"Our entire catering season in 2020 was almost entirely wiped out, and we have been looking to the 2021 season with hope of recouping some of our losses and to survive another year under these circumstances," reads a letter signed by Christina and Rudy DeSanti, who own Dreesen's Catering in East Hampton, John Kowalenko and Cheryl Stair, who own Art of Eating in Bridgehampton, Debbie Geppert of Bostwick's Catering in East Hampton, and numerous others.

"We are well-established local businesses providing jobs to local people, who pride ourselves on our quality products and service, food safety standards, and our commitment to giving back to our communities," they wrote. "It does not seem that Albany understands what off-premises caterers do, or just how extensive the industry is in the Hamptons on season, as all of the current guidelines coming out of Albany appear to favor restaurants/venues and discriminate against off-premises caterers. . . ."

Mr. Thiele is on their side. "We've been working on that for a couple of weeks now. We've been in touch with the governor's office, and the governor is looking at it," he said Tuesday. "That limit of 25 has no relationship to the size of the property. Twenty-five people outside at my house would be a crowd, but at a lot of properties in the Hamptons, it would not be. . . . It's the definition of arbitrary and capricious. I think it's not rational as it applies to off-premises caterers, and it needs to be fixed."

If Gov. Andrew M. Cuomo won't do it by executive order, Mr. Thiele said, the state legislature will likely take up the issue, although that would take a lot longer, process-wise, to accomplish.

Also on the caterers' side are East Hampton Town Supervisor Peter Van Scoyoc and other local elected officials. The East End Supervisors and Mayors Association has sent a supportive letter to Governor Cuomo pointing out that there are few catering halls and commercial venues here and saying that events are already regulated through a local permitting process.

"If catered events can be safely held at nonresidential sites at certain occupancy limits tied to whether or not 'testing and other advanced health protocols' are in place, we see no reason why similar-sized events cannot be safely held on residential properties, with caterers following the same safety guidelines," the association wrote in its letter.

Mr. Van Scoyoc said in an interview that there can't be a "one size fits all" approach to gatherings.

"For many of our local residents, this is the income that allows them to pay bills and mortgage payments that allow them to stay in town. It's critical that we get relief," he said.

Reached by phone on Tuesday, Mr. Kowalenko said Art of Eating only did 65 percent of its usual business in 2020, and it would have been far less if the company had not transitioned to takeout and pickup of prepared holiday meals.

"If the regulations don't change to bring us at least equal to what is happening in the world of on-premises catering and restaurants, it's going to really be the end of some businesses," he said. "To go through another summer like this -- our overhead is not designed to do 25-person parties and weddings. They help, and we do them, but we need to get the numbers up to support the overhead out here."

After a long sigh, Mr. Kowalenko continued, "I feel it's all going to work out eventually, but we are running out of time. This is so time sensitive now."