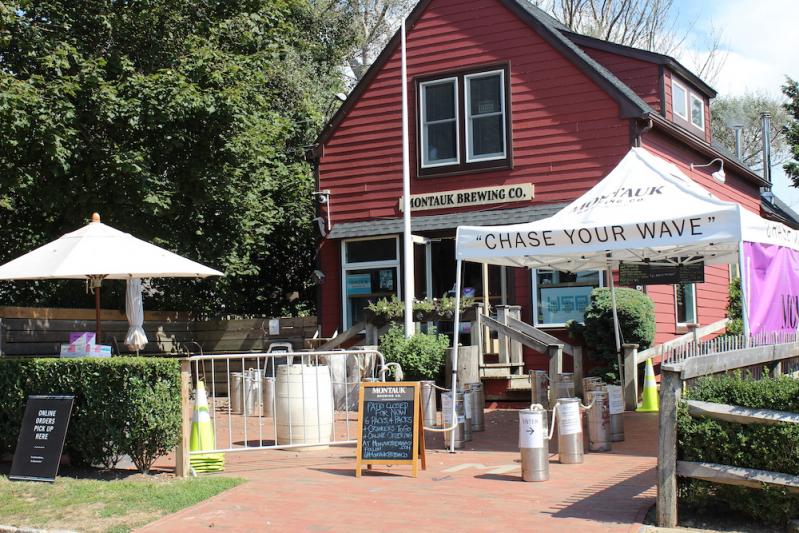 When the Montauk Brewing Company declared its support for the Black Lives Matter movement on a chalkboard outside its tasting room in June, initial reactions were positive, but a delayed backlash in the form of a new Facebook group called Defund Montauk Brewing Company emerged earlier this week and by Sunday had over 20,000 members.

The group, whose administrators are listed as Valeria Frank and Rob Frank, says on Facebook that it was formed to draw attention to the brewing company's "poor decision" to support "a anti American terrorist group." The group has since been made private, but posts that were visible on Friday expressed outrage at the implications of the Black Lives Matter movement. One photo from a user showed a woman pouring blue paint on a B.L.M. mural in Manhattan with the caption "because "#BlueLivesMatter too." Other members disparaged the B.L.M. movement and expressed anger at what they perceived as a "group" that condoned violence and oppression.

On Friday afternoon, the Montauk Brewing Company owners, Eric Moss and Vaughan Cutillo, were gathering themselves before coming forward with an official statement, the tasting room manager said.

The chalkboard that had been outside the business earlier that day read, “We have, and will always support our local police, first responders, nurses, doctors, and fire departments. We also support equal rights for all. At the end of the day, we support good people doing good things." Mr. Moss's father is a retired East Hampton Town police officer.

Yesterday morning the company's owners posted a more detailed response to the group calling for a boycott of their brand. "While our post received overwhelming support initially, recent responses made us realize we should clarify and affirm our intent. Our post was specifically in support of racial equality. We unequivocally, and unapologetically, stand against racism and violence in any capacity."

The letter goes on to detail how the company's "track record shows that we consistently donate to Police Precincts, Fire Fighters, the Navy Seal Foundation, Wounded Warrior Project, Coast Guard, Mt. Sinai Hospital, and more. We will never take a partisan stance, but we will always be empathetic towards the mistreatment of others."

By Sunday, over 1,300 people had commented on the post from both sides of the divide. One promised that the company's stance had won them "a customer for life" and others continued to decry the business for "supporting a home-grown terror group like BLM".

Those weighing in on the Montauk Brewing Company's behalf wrote "We support you wholeheartedly and appreciate you being unafraid to be anti-racist," and "I don't understand why people believe that you can't support our dedicated law enforcement officers AND despise racial inequality. It shouldn't be either/or!!!"

"Enjoying a beer or two with friends and family is supposed to be fun. Keep your personal feelings of politics away from your product promotion," another person wrote.

"Not Cool !!!" another posted "You took your stand and crossed the line , you lossed (sic.) my patronage and many others! Also canceled my trip to the east end !!!"

Vanessa Leggard, the editor of an online news outlet called Hamptons Mouthpiece, had criticized the organizers of the Defund Montauk Brewing Company group, and on Sunday morning posted a message of support for the brewing company. "Sad they even had to put out a statement for posting their support for racial inequality and racism. These are racist bullies attacking this company and we must support them."

And Kate Mueth of East Hampton, the founder and artistic director of the dance theater company the Neo-Political Cowgirls, made a Facebook page called "We Love Montauk Brewing Company" on Friday, which had about 200 likes as of Sunday. It encouraged people to "Spread the love of good product and good people all rolled into one company."

The Outdoor Agenda 09.17.21
A Surf Meetup for Youth
I-Tri Ride and Wine Is Saturday
END_OF_DOCUMENT_TOKEN_TO_BE_REPLACED