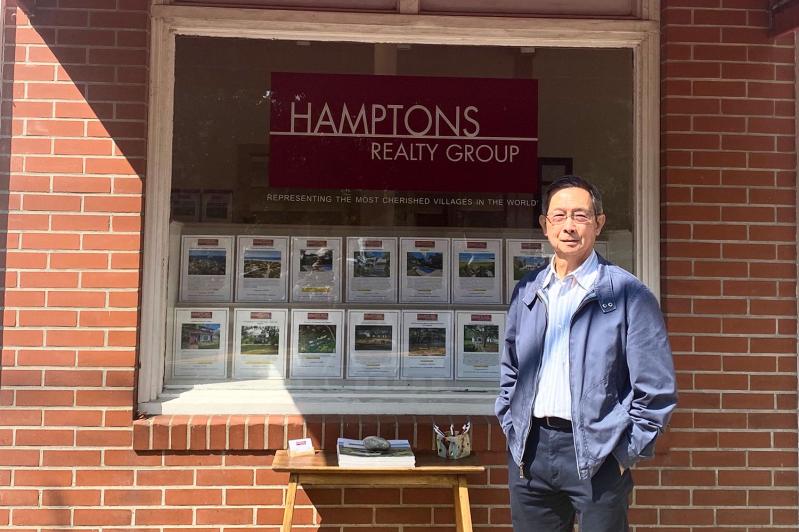 Htun Han, the owner of Hamptons Realty Group, stood in front of the firm's office on Main Street in Amagansett last week, a few days before moving out.
Jamie Bufalino
By Jamie Bufalino

The Hamptons Realty Group, a fixture on Main Street in Amagansett since 1984, rolled up its signature red awning and vacated the space this week. The firm is still very much alive and prospering, said its owner Htun Han, but the pandemic has changed the way it is doing business.

The 2,400-square-foot space at 225 Main Street is "too big for my needs," he said. The real estate market here has been booming as New York City residents and others flee to the East End to escape the pandemic, but, because of safety concerns, in-office visits with clients have been nonexistent.

"The roads have been bustling, but no one wants to come in, and we don't want them to come in," Mr. Han said. "Nowadays, let's face it, with a phone, a tablet, or a computer you can be doing real estate business anywhere."

Originally from Rangoon, Burma (now Yangon, Myanmar), Mr. Han earned a doctorate in fish farming from the University of East Anglia in England, and arrived on the South Fork in 1978 to work at the New York Ocean Science Laboratory in Montauk, a marine research facility. "At the time, there were major problems with striped bass. My task was to find out what we could do to revive the population."

Eighteen months later, during an economic downturn, the lab lost its state funding and closed. "In 1979, I saw the handwriting on the wall and thought, I've got to do something." At the time, "there were only two options for year-round jobs, selling insurance or selling houses, so I jumped into real estate with both feet. And I've been doing it ever since."

He started out at Jack Douglas Realty, which operated out of a house on Woods Lane in East Hampton ("three doors west of the Jewish Center"). In 1984, he partnered with Peter Garnham, a former colleague, to start Garnham and Han, the precursor to Hamptons Realty Group. They set up shop at 225 Main Street. "Out of all the hamlets, we'd both fallen in love with Amagansett."

"1984 was a momentous year for me; it will forever be etched in my mind," Mr. Han said. He was in the process of building a house, and he and his wife, Khin, were expecting their first child. The month before he launched his new business, his daughter Thuzar was born with a rare genetic disorder.

"The first six weeks, she was at North Shore University Hospital, and we were driving back and forth every day, at times twice a day, and then she was at Southampton Hospital for almost a year. With that backdrop, I was planning to start the business."

When the doors opened that October, "there could be no celebration, because I was dealing with my daughter, and at that time we didn't have two pennies to rub together. All we needed to do was make deals, pay the bills, and survive. Talk about starting from scratch. It was less than scratch."

"That's why each and every deal, I treasure so much. There were times in my career where one deal was make-or-break."

While his daughter was alive, Mr. Han often enlisted the help of the Amagansett Fire Department's ambulance squad. In appreciation, he joined the ranks, and has been a member for 35 years. "I've always said the three loves in my life are my family, my business, and the fire department." Thuzar died in 1990.

In the firm's early days, "We hand-wrote all the listings and organized them by master copy, area, and price," he recalled. "Can you imagine, from then to now, how things have changed?" The office's first computer was a $5,000 Eagle, and "all it did was word processing." The first printer "was about half the size of this desk."

"Those were the days that your word and a handshake meant everything."

Over the years, Mr. Han has learned to adapt to the changes in the industry, he said, but the pandemic caught him off guard. He was visiting his daughter, Kaythi, in Maryland when Gov. Andrew M. Cuomo ordered nonessential businesses to shut down and residents to quarantine.

"My second grandchild was due to arrive in May," he said, so he decided to stay put. Otherwise, "I would have had to quarantine myself on either end."

He returned to Amagansett in early July, to a business that was being run virtually. Suddenly, the office "was just like all those hundreds of thousands of square feet of space in Manhattan that people are not using and having to pay rent for. I said to myself, why am I paying all this rent? and at the end of July, I gave 60 days' notice to the landlord."

His firm has moved to a space at 532 Montauk Highway, a building housing the law offices of John Courtney and Rick Whalen, among other tenants. "I chose it because of the other professionals, it has lots of parking, and it's right across from the I.G.A., so it's easy to find and easy to give directions to."

Of his former location on Main Street, "I think I'm the last holdout," he said. In 1984, his neighbors had included McKendry's Pub, and, across the street, Vinnie's Barbershop, which has since moved to a space within Amagansett Square.

"I never thought I would move out of this spot; I've loved being here so much," Mr. Han said. "I'll miss the familiarity, miss seeing people waving and yelling out a greeting to me, and, when they see my car outside, stopping in. Now people will have to find me."