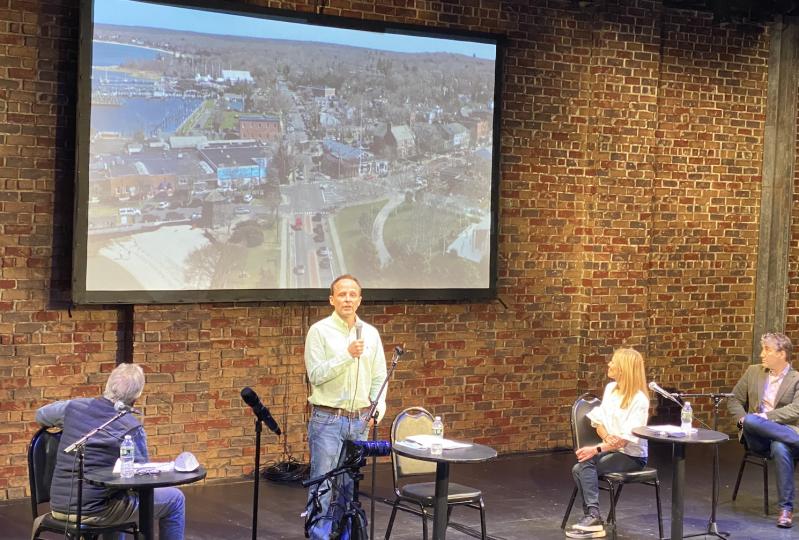 At a Bay Street Theater presentation on Saturday, Adam Potter, standing, showed a rendering of what Sag Harbor would look like if 2 Main Street were torn down.
Jamie Bufalino
By Jamie Bufalino

Bay Street Theater's plans to build a new theater complex and develop other properties near the Sag Harbor waterfront received mostly harsh critiques from village residents at a public forum on Saturday.

The theater organized the forum to answer questions and seek feedback about its development plans, and to ease concerns about its ambitions. "I actually want to start by apologizing for getting out ahead of ourselves, and for not maybe getting the dialogue started in the right way," said Tracy Mitchell, the executive director. The theater's goal, she said, is to build a complex that would beautify the entrance to the village, and preserve access to the waterfront. "Nothing is set in stone, except that Bay Street will be building a theater on the 7-Eleven property," she said referring to the West Water Street Shops parcel.

In October, the theater announced that it had purchased the West Water Street Shops property adjacent to John Steinbeck Waterfront Park for a new theater, and that the nonprofit Friends of Bay Street had been formed to develop the property and finance the project. The theater has since laid out a grand vision for that section of the village that includes leasing a parking lot owned by National Grid and purchasing and tearing down 2 Main Street -- a building that contains the K-Pasa restaurant and other businesses -- to create an extension of Steinbeck Park.

After the theater offered a look at the architectural design of the complex on April 6, several residents, including Mayor Kathleen Mulcahy, expressed concerns about the size of the structure. "We don't need Lincoln Center here," Kathryn Levy, a resident, said to loud applause at a public hearing held by the village board on April 23. "I think the theater would overwhelm the village."

Addressing the size of the new complex, Scott Schwartz, the artistic director, said on Saturday that the theater is "bursting at the seams" in its Long Wharf home and needs more room to accommodate a rehearsal space, the educational classes it offers, staff offices, and the technical equipment required for stage productions.

Adam Potter, the chairman of Friends of Bay Street, offered details about the dimensions of the new complex that had not previously been shared. The building would range in height from 18 to 39 feet, he said. That would be eight feet less than the 2 West Water Street condominiums under construction on an adjacent lot. "That's almost a floor less than the neighbor next door," he said. Although the maximum height allowed by the code the village is developing for the area would be 35 feet, he said only 4 percent of the building would be above that height.

Mr. Potter also explained his organization's role in the theater's development efforts, and attempted to clear up misconceptions about other real estate deals in play, including the leasing of the National Grid property and the purchase of 2 Main Street, and 11 Bridge Street, commonly known as the Dodds and Eder building. Friends of Bay Street's sole focus has been to purchase and develop the Water Street Shops property. "That's it," he said. "We have our space." Although he had heard rumors that he was seeking to purchase the Sag Harbor Launderette, the Apple and M and T bank buildings, and even the American Hotel, "Friends of Bay Street is not purchasing any additional buildings, we're not in contract, we're not leasing, period," he said.

He later contradicted himself by saying, "Yes, we did lease the parking lot . . . and we want to keep it open to the community."

A separate group of investors is seeking to buy 2 Main Street, he said, and hopes to sell the property back to the village. If the deal is finalized, "this company will likely lose money," but the investors were eager to see the land used as an extension of Steinbeck Park.

He personally purchased the Dodds and Eder building and two properties on Rose Street, he said, to provide new spaces for businesses including those previously based in the Water Street Shops building, to create new affordable housing units, and to address water quality concerns by seeking to hook some of the properties up to the village's wastewater treatment plant.

Duncan Darrow, who has a law office in the village, took issue with the grandiosity of Mr. Potter's plans. "You sound like Robert Moses, you sound almost like the Mayor of Sag Harbor, [as if] someone has endowed you with this massive amount of authority and you're going to kind of remake half this village in your image," he said.

April Gornik, a member of the Sag Harbor Partnership and co-founder of the new Church arts center, said a 39-foot-high building would be "visually overwhelming," and Bob Weinstein, the co-director of the Save Sag Harbor citizens group, said that although he appreciated Bay Street's contributions to the community, he thought the theater's plans were a bad fit for the village. "Part of Sag Harbor's character is scale," he said. He recommended building a complex that is compliant with all of the village's codes; otherwise, he said, "Sadly, maybe Sag Harbor isn't the right place for you."

Robert Remkus, whose family had initially developed the property the theater purchased, said he liked the design, and urged residents not to resist change. Ken Dorph said he and many of his friends were excited about the new complex, but encouraged the theater to be more transparent about its plans.

Several residents asked Mr. Potter and Ms. Mitchell to identify the financial backers of Friends of Bay Street. The names would be revealed when the organization files its tax returns, they said.

James Larocca, a trustee, chided the theater for presuming that its plans for the West Water Street parcel would come to fruition. "You've got miles to go to sell this idea to a series of boards," he said. He also pleaded with the theater to refrain from building on the property. "It took us four years plus to get Steinbeck Park," he said. "Do not take so much of our hard-won waterfront." He suggested the Dodds and Eder property and the municipal parking lot as alternative locations for the new space. "The theater does not need for any of its essential functions to be on the most precious waterfront left on the East End," he said. "If you work with us and take your plans up Bridge Street, I will be your best friend in government."

Mr. Potter said National Grid would not allow structures to be built on the property, and the Dodds and Eder site was too small to accommodate the complex. The theater will consider the suggestions to scale back its plans, he said, but "we can't commit to you that we're going back to the drawing board."

The Outdoor Agenda 09.17.21
A Surf Meetup for Youth
I-Tri Ride and Wine Is Saturday
END_OF_DOCUMENT_TOKEN_TO_BE_REPLACED