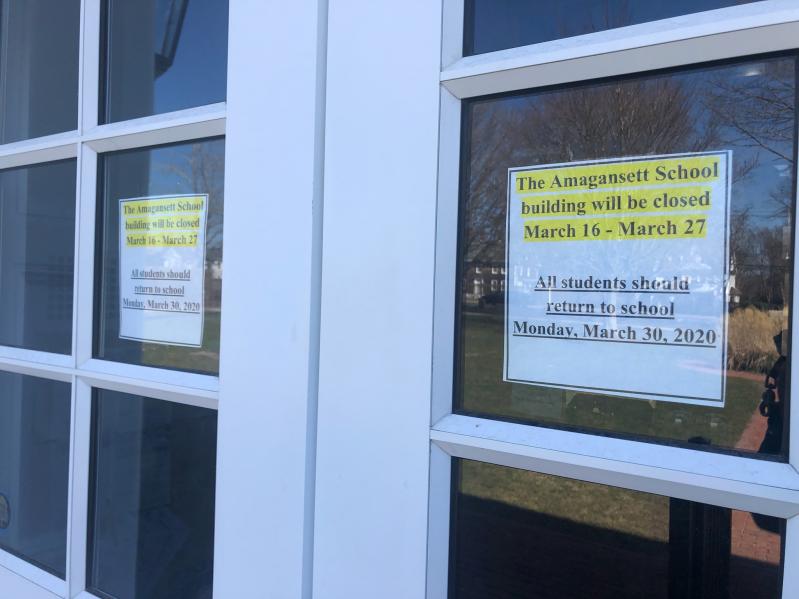 The Amagansett School, shuttered. Many districts are already putting distance-learning plans in place, with some distributing Chromebooks to students who do not have computers.
Christine Sampson
By Christine Sampson

A similar announcement was made early on Sunday by Nassau County Executive Laura Curran.

Most South Fork districts had already announced closures ranging from one day to two weeks. J.P. Foster, the East Hampton School Board president, confirmed Sunday afternoon that Mr. Bellone had informed school districts of his announcement.

Mr. Bellone issued a statement saying he is following the recommendations of the county health commissioner, and acting in consultation with the superintendents' association.

"As we prepared over the last several days for the potential closure announcement, we had discussions . . . about critical issues involving meal programs for kids and child care," he said. "There is evidence that the virus is already present in many communities we serve, and our efforts now must be aimed at preventing its spread. As part of our larger social distancing efforts, we believe that closing schools is the right thing to do at this time."

Many districts are already putting distance-learning plans in place, with some distributing Chromebooks to students who do not have computers.

Meanwhile, Gov. Andrew M. Cuomo said Sunday that the number of cases statewide has risen to 729, including 41 in Suffolk and 79 in Nassau. The National Guard has been deployed to New Rochelle to assist in creating a containment zone there, as Westchester County is up to 78 cases.

Suffolk County Legislator Bridget Fleming, who on Saturday sent a letter to Governor Cuomo calling for all schools in the state to be closed temporarily, said on Sunday that both the governor and the county executive have "worked quickly in such a difficult situation to ensure the needs of the community are met."

"The critically important priority has to be containing the spread of the virus, and the medical professionals recommend that the schools need to be closed for that to happen," Ms. Fleming said. "We have to make sure that the adverse impacts to families are considered and dealt with during these difficult times."