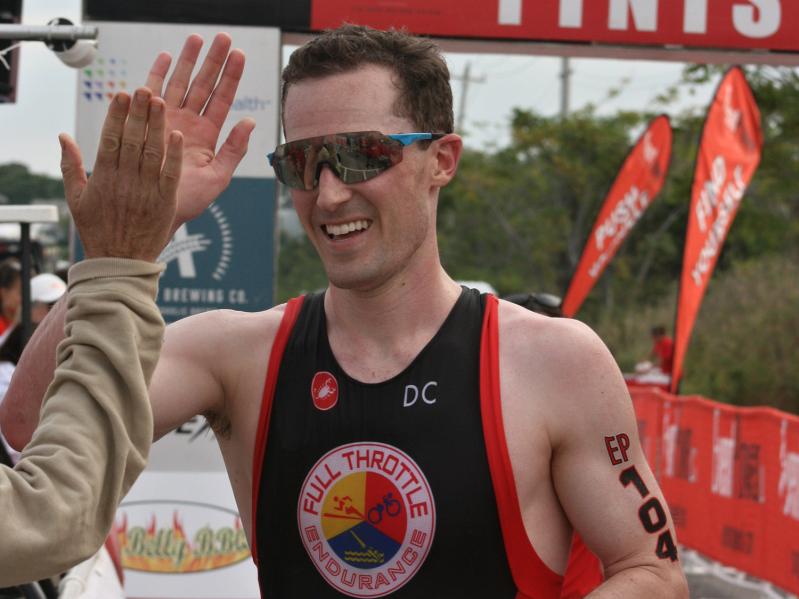 Huffman, a first-timer at Mighty Hamptons (though he won the Bob Aaron Memorial Triathlon in Montauk in June), won $1,000 from Event Power L.I. for his efforts in the 40-year-old event, which comprised a 1.5-kilometer bay swim, a 40K bike through rolling terrain in Bridgehampton, and a 10K run onto North Haven and back. Huffman estimated that there were upward of 100 triathletes at Chelsea Piers, adding that “we’ve got a great coach in Scott Berlinger.”

Jodie Robertson, 37, the band teacher at Herricks Elementary School in New Hyde Park, repeated as the female winner, and was fourth over all, in 2:08:08. She’d been faster last year, she said, owing to the fact that she’d worn a wetsuit, “which makes you more buoyant.”

Robertson, whose 2:06:48 last year stands as the women’s record, will do the Kona Ironman on Oct. 6 and is hoping to improve on last year’s 20th-place finish. Ironman was out for him, said Huffman, who prefers shorter distances.

Everyone agreed that the conditions that cloudy morning were perfect.

“The bike is technical,” Falkenhan said, “hilly in the beginning and then for the last half of it or third of it there’s a false flat. It looks flat, but it’s a steady uphill grade.”

He would train more, he said, “but I sell insurance and have three kids, and there are only so many hours in the day.”

Among the relay racers were Angelika Cruz, Bob Bottini, who, with Tim Treadwell made up the Lifeguardian Team, and Steve Cox, a fellow masters swimmer at the Y.M.C.A. East Hampton RECenter.

Cruz’s daughter, Daisy Pitches, was the third-place finisher in the East Hampton Volunteer Ocean Rescue squad’s Red Devil one-mile ocean swim at Atlantic Avenue Beach in Amagansett on Sept. 3, behind Liam Knight and Miles Menu. Cruz herself was sixth in that race. Lori King, who recently became the first person ever to swim between Block Island and Montauk, was eighth.