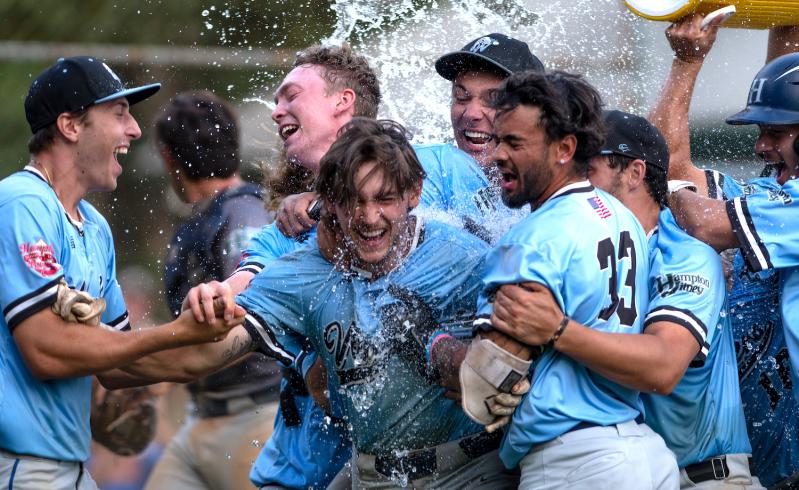 D.J. Perron Jr., who scored the Sag Harbor Whalers’ championship-winning run in the bottom of the ninth inning at Sag Harbor’s Mashashimuet Park Sunday, was the center of attention.
Craig Macnaughton
By Jack Graves

The Sag Harbor Whalers, with a part-time East Hamptoner, Brett Borcherding, pitching in relief, defeated the Westhampton Aviators 6-5 at Sag Harbor's Mashashimuet Park on Sunday to win the Hamptons Collegiate Baseball League's championship series 2-1. It was the first H.C.B.L. championship for a Whaler team since 2008.

Carol Valentine, Borcherding's mother, at whose house the team celebrated their victory afterward, said, "This team had heart, soul, talent, and chemistry. They had a winning attitude and a dynamic coach," Jacob Tobin. "They deserved it."

The three-game final series was closely contested throughout. The Whalers won game one, also by a score of 6-5, and the Aviators won 12-7 on Saturday, bringing about Sunday's winner-take-all contest at the park.

A junior mechanical engineering major at Rose-Hulman Institute of Technology in Terre Haute, Ind., Borcherding, a Brooklyn Tech graduate who has summered and weekended here since childhood, was the winning pitcher in three of the Whalers' last four playoff games. He had started the season, he said, as a starter, but a muscle spasm he experienced during a showcase near the end of the season had persuaded Tobin to use him in a reliever's role -- clearly a wise choice.

"He's probably too humble to tell you," Valentine said, "but he throws 94 miles per hour."

Borcherding, a 6-foot-3, 205-pound right-hander, came into the game with the score tied at 5-5 in the eighth inning and proceeded to shut the Aviators down.

The Whalers won it in the bottom of the ninth. D.J. Perron Jr., the first baseman, the seventh hitter in the lineup, led off with a double to right field. Ryan Miller, the Aviators' pitcher, then intentionally walked Mike Maher, bringing up Wyatt Benson, the shortstop, who bunted down the third-base line. Miller came up with it, but overthrew third in an attempt to force Perron, who, prompted by the error, continued around to score the game and championship-winning run.

Mashashimuet Park's History and Future
A Conference for Young People to Create Solutions
Get Outside, Get Moving
END_OF_DOCUMENT_TOKEN_TO_BE_REPLACED