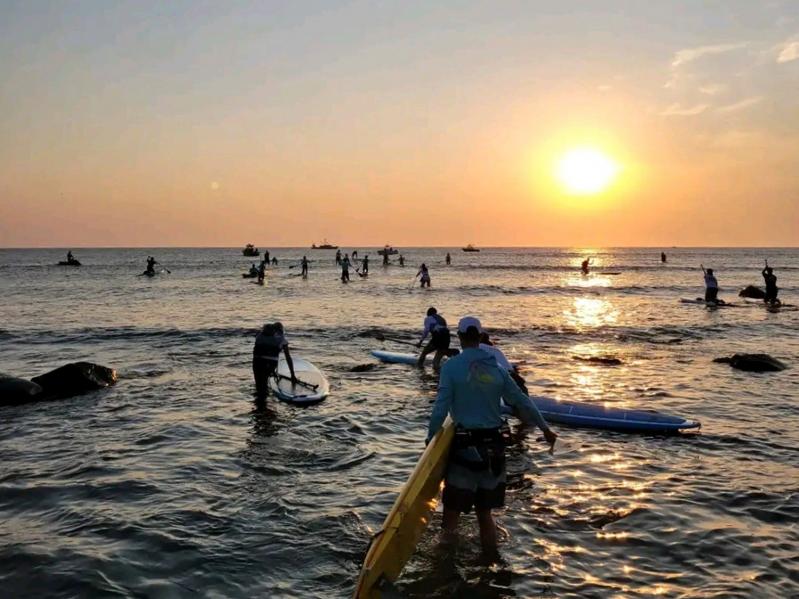 When a fin slashing through baitfish was sighted out beyond Endeavor Shoals several miles east of Montauk Point a slight panic ran through the crowd of 35 kayakers and stand-up paddleboarders.

“Shark?” someone yelled, which was followed by a swift pronouncement from the trip leader.

“Sunfish!” Ed Cashin declared, almost too quickly — sunfish being harmless giants — but much to the relief of the group balancing themselves on unstable crafts in rolling Atlantic swells on their way east to Block Island.

The feeding fish with the sharp triangular fin cut one way then another before diving under the group and disappearing. Later, others confirmed the fin unquestionably belonged to a shark, probably a brown shark. Cashin had been keeping his Paddlers for Humanity calm and focused on the day’s goal: getting the adventure fund-raisers to Great Salt Pond on Block Island.

The July 23 crossing from Montauk Point to Block Island was the 12th for Paddlers for Humanity. An event conceived in 2008 by Cashin and Fred Doss along with a group of local friends, all uber athletes, it raises money for local children and families in crisis. Participants have raised more than $2 million since the event’s inception for such organizations as Project Most, the Retreat, the Eleanor Whitmore Early Childhood Center, the Hampton Lifeguard Association, and local schools and food pantries, among dozens of other organizations.

Two of the leaders of the crossing, Cashin and Lars Svanberg of Wainscott, came up with the charity paddle idea after making the crossing to Block several times as a fun challenge — one of many open-ocean paddles they were completing at the time — first on kayaks and on huge surfboards known as prone-paddling boards, then on stand-up paddleboards. Once they realized the Montauk-to-Block crossing was possible and safe, given the proper conditions and support vessels, they came up with the idea of doing it annually, with friends new and old, to greater benefit.

“To me, the amount of money people raise consistently is the most extraordinary thing about this paddle,” Svanberg said afterward.

Because the crossing is a huge physical effort with an element of danger, it “seems to me to have an almost mystical energy that propels people to raise huge amounts of money individually.”

The 2022 paddle raised some $115,000 from hundreds of donors. Donations continue to come in. Those who wish to donate or to sign up for next year’s Paddlers for Humanity crossing can do so at p4h.org.

Almost every crossing has come with challenges: giant swells from offshore storms, headwinds, inclement weather. Some years the event had to be rescheduled for more suitable conditions; it was canceled twice recently due to weather and once due to Covid.

There was none of that on July 23. The day dawned hot and clear and stayed that way. The 19-mile paddle to Block was aided by a westerly tailwind and a following southwest swell. Setting off at dawn, a fleet of vessels led the way: Montauk’s Dan Farnham and David Tuma at the helm of Farnham’s

vessel the Kimberly, a long-liner based out of Montauk and New Bedford, Mass., and (Little) Anthony Sosinski, piloting his Montauk lobster boat the Anna Mary.

Out front on her board most of the way was Emily Hammond, who has done nine of the crossings and said she personally meets with the local charities Paddlers for Humanity supports. Not far behind was Jim McCarthy of North Haven, who spent 14 days in the hospital with Covid in 2021, four of them in the intensive care unit.

“After I got through it I said to myself I’m not going to turn down any opportunities to be in nature doing the things I love to do,” McCarthy said.

The pace was moderate, and everyone who set out made it across, seasickness being the biggest challenge.

“The serenity and beauty of the open ocean was amazing,” said the Sag Harbor paddler Luke Babcock of the six and a half hours on the water.

“Being a speck in the sea, paddling over dark, glassy swells in water 200 to 300 feet deep was both awesome and ominous. I’m also happy to report that our shark sightings — one — outnumbered balloon litter.”