Jorge Naula also had a hat trick on July 19 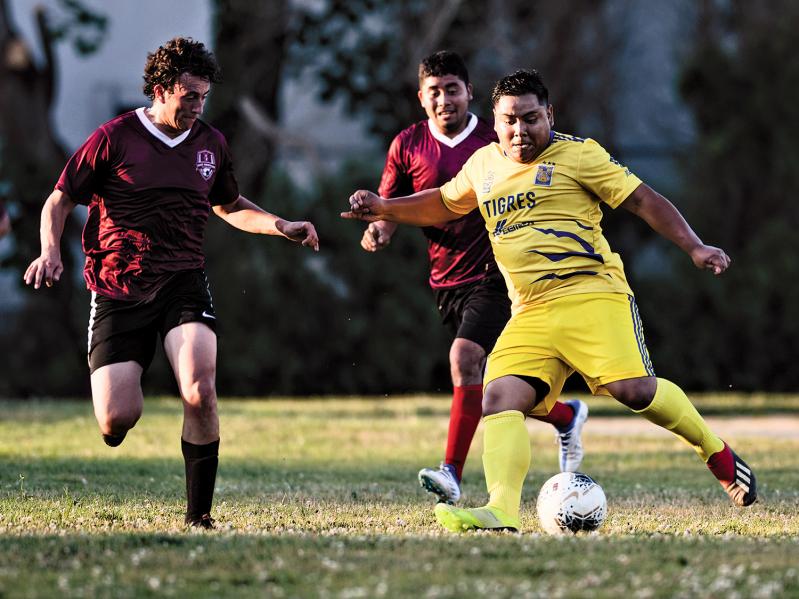 Cristian Compuzano, a stocky striker who plays for F.C. Tuxpan, took over the 7-on-7 men’s soccer league’s Golden Boot lead with a hat trick at East Hampton’s Herrick Park on July 19, treating his team to a 3-1 win over the defending-champion East Hampton Soccer Club.

Compuzano, going into Tuesday’s games, led the goal-scoring list, with eight. Sag Harbor United’s Donald Martinez had six, as did Jorge Naula of Maidstone Market, who also had a hat trick on the 19th, helping his team defeat Tortorella Pools 5-2 in the third game contested that night. Compuzano also topped the player-of-the-season (goals and assists) list, with 16 points to Martinez’s 13 and Naula’s 12.

Asked about the Soccer Club’s decline following its loss to Tuxpan, Michael Tamay said not all the players he had last fall were still with the team. Among the missing that night were Mark Bako, who had nine goals in the fall season, and Justin Carpio, who had seven. Those two each scored twice in leading the Soccer Club, the league’s youngest, to a 4-1 win over Maidstone Market in last November’s championship game.

“I’m not even sure we’ll be able to finish the season — a lot of our players will be going back to college,” added Tamay, who, with Luis Barrera, Hedrys Palencia, Esteban Aguilar, and William Solis, also coaches East Hampton’s four youth teams, which have been doing very well in Islandwide competition.

The regular 7-on-7 season is to end on Aug. 23; the playoff semifinals are to be played on Aug. 30, and the championship game is scheduled for Sept. 6.

Junior Garces saved a little face for the Soccer Club on July 19 when he scored near the end of regulation, his left-to-right kick finding the nets just under the crossbar at the right post. Otherwise, Tuxpan’s goalkeeper, Willson Tacuri, who made a number of notable saves, was impregnable. Tacuri’s counterpart, Aguilar, did not have a particularly good night. None of Compuzano’s goals were blasts.

Maidstone’s versatile goalie, Alex Mesa, was tagged with an own goal in the early going as he dived for the ball, which had been played back to him by Danny Bedoya, inadvertently knocking it over the goal line and into the nets. Tortorella took a 2-0 lead soon after when David Rodriguez gathered in a pass from Eddie Lopez, juked a defender, and beat Mesa in close.

In the time remaining in the first half, Naula came up big, scoring twice, so that the game was tied at 2-2 at the halftime break.

Tortorella came up empty in the second half while Maidstone scored three times, once thanks to an own goal owing to a misfire by a Tortorella defender, Stiven Orrego, that got by his goalie, Cristian Duran.

“The last goal of the night was a nice one,” Czeladko said in his weekly report. “Naula dribbled toward the box from one side and fired the ball into the center of the goal mouth where a Tortorella defender, Elvis Rojas, and a Maidstone player, Emilio Espinoza, vied for it. Espinoza got to the ball first and passed off to Malher Baldrich, who, from four yards out, pounded a ground-hugger that zipped past Duran.”

In games played on July 5 (the July 12 games were postponed because the park’s lights didn’t work), Tuxpan, which began with only five players and without Tacuri in the goal, tied Liga De Gulag 4-4; Sag Harbor United, with Martinez getting a hat trick, defeated Tortorella Pools 6-3, and the Soccer Club and Maidstone, in a game limited to 15 minutes because the lights didn’t come on, played to a scoreless tie.

On Tuesday, Tuxpan and the Market were to have played at 6:30, Liga De Gulag and Tortorella at 7:25, and the East Hampton Soccer Club and Sag Harbor United at 8:20.

Mashashimuet Park's History and Future
A Conference for Young People to Create Solutions
Get Outside, Get Moving
END_OF_DOCUMENT_TOKEN_TO_BE_REPLACED