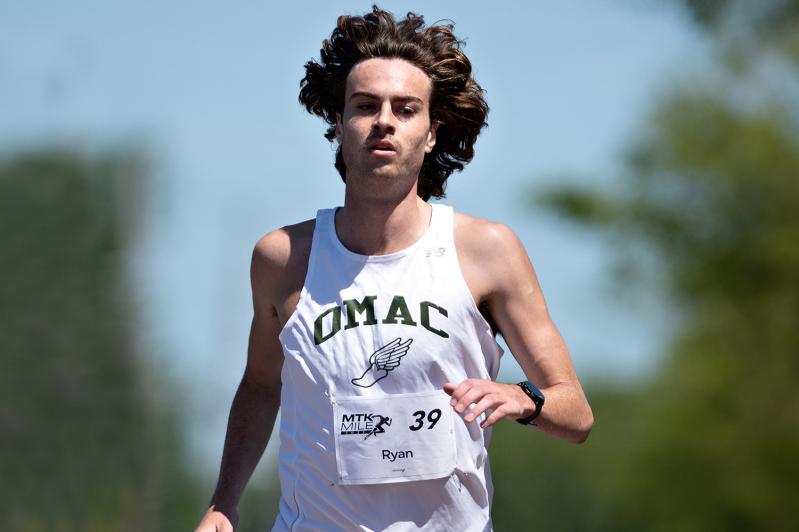 Ryan Fowkes, a George Washington University junior who was the A10 champion in the 1,500-meter race, will be seeking his fourth win in the Montauk Mile on Sunday.
Craig Macnaughton
By Jack Graves

Ryan Fowkes, who set and reset school records in the outdoor 1,500-meter race in his very successful junior year at George Washington University, will be in the Montauk Mile field Sunday, as will Kal Lewis, a Shelter Islander and standout runner in the same distances at the University of Iowa. Fowkes has already won the Old Montauk Athletic Club-sponsored race three times.

At the Princeton invitational recently Fowkes ran the 1,500 in 3 minutes and 43.78 seconds, which translates to a 4:01.68 mile. He tried to break 4 minutes at Nashville’s 20th annual Music City Track Carnival over the weekend but had to content himself with a 4:07, his mother, Jennifer Fowkes, OMAC’s treasurer, said in an email Sunday. Lewis has run a 4:04 mile for the Hawkeyes, and has a similar time as Fowkes’s in the 1,500.

The Montauk Mile course along Edgemere Road spans the old Montauk railroad station and Lions (Hank Zebrowski) Field. The women’s race is to begin at 10:30 a.m., the men’s race at 11. Fowkes and Paige Duca, a Boston College graduate who ran cross-country and track there, were last year’s winners. The race’s net proceeds will help underwrite a September trip to Rhode Island for East Hampton High School’s boys and girls cross-country teams, either to the Brown University invitational or to the Ocean State regionals in Warwick.

Would-be participants can register through elitefeats.com. The entry fee is $25 for those 21 and over, $15 for those under 21. There will be no day-of-race registration.

The male and female winners will get their names engraved on the John F. Conner Cup. The cup was named by OMAC in honor of the now-87-year-old Conner in 2017. The Springs resident, a longtime mentor to young runners here, set a world record in the mile for 55-to-59-year-olds in 1990.

There will be two races here on Saturday, June 18 — the Beacon of Hope 5K, a trail run spanning the Montauk Lighthouse and Camp Hero, at 9 a.m. that day, and the 43rd Shelter Island 10K at 5:30 p.m.. Presumably there will be a number of double-dippers. Elitefeats is handling registration for the Shelter Island 10K; eventpowerli is handling registration for the Beacon of Hope race, which is to benefit Lucia’s Angels and the Coalition for Women’s Cancers.

Also on the athletic calendar, play in the East Hampton Town men’s slow-pitch league is to begin Monday at the Terry King ball field on Abraham’s Path in Amagansett and the 7-on-7 men’s soccer league season is to begin at East Hampton’s Herrick Park on Tuesday, with games at 6:30, 7:40, and 8:20 p.m. At East Hampton High School, Kathy Masterson, who is to take over from Joe Vas as the school district’s athletic director in July, will meet with parents and students on Wednesday at 6 p.m. in the auditorium.