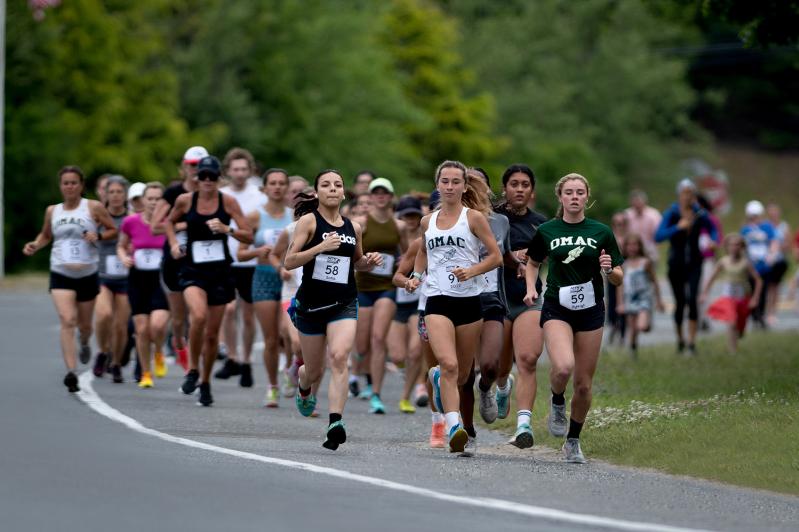 Well, a hoped-for duel between Shelter Island’s Kal Lewis and East Hampton’s Ryan Fowkes didn’t come about in Sunday’s Montauk Mile — Lewis, who runs for the University of Iowa Hawkeyes, having decided not to enter after all — but Fowkes, a George Washington University junior who has a 3:43 1,500 to his credit, as does Lewis, made the most of it, pulling away from the pack and winning in a course-record time of 4 minutes and 26.77 seconds.

The race drew 140 registrants, the most ever.

Kevin Barry, Fowkes’s former cross-country coach at East Hampton High School, said Fowkes’s time was “a very good one, especially considering that he was running into the wind the whole way and that Edgemere Road from the old railroad station to Lions Field runs slightly uphill.”

Erik Engstrom, the runner-up and a two-time winner of the Montauk Mile, ran a 4:13 in 2020, but that year it was a virtual race and the course he and Paige Duca, a multiple Montauk Mile winner, chose was a downhill one toward Montauk’s docks. Engstrom, two years out of the University of Massachusetts, finished in 4:47.90. The Green brothers, Jason, 19, and Joshua, 22, Shelter Islanders who have talked of running together for Northern Arizona University, which has the top cross-country team in the country, were fourth and fifth, in 4:49.45 and 4:58.22. Brayan Rivera, who runs with East Hampton’s boys cross-country team, was sixth, in 5:01.998, and Liam Knight, a Springs School eighth grader, was 10th, in 5:16.64.

Dylan Cashin, an East Hampton sophomore who is to compete in the Nike Outdoor Nationals’ scholastic 2,000-meter steeplechase race in Eugene, Ore., on Saturday, won the women’s mile race in 5:46.78, trailed closely by her teammate Ryleigh O’Donnell, whose time was 5:47.81. Beth Feit, who is 52, placed fourth in 6:33.20; Leslie Samuel, a teammate of Cashin and O’Donnell’s, though known more for her sprinting than  long-distance running, finished sixth in 6:36.18, and Sharon McCobb, 58, president of the Old Montauk Athletic Club, which sponsors the Montauk Mile, was 10th in 7:04.78.

Cashin hopped on a train for Hampton Bays soon after so she could train on that school’s 12-foot water jump. The Old Montauk Athletic Club is paying for her hotel room in Eugene, and those looking to contribute can email Jenn Fowkes, OMAC’s treasurer, at [email protected], or Sharon McCobb, the group’s president, at [email protected].

The Montauk Mile was not the only athletic event in Montauk last weekend: On Saturday, a field of about 200 vied in the Robert J. Aaron Memorial Mighty Montauk Triathlon, whose staging area was at the intersection of West Lake Drive and Star Island Causeway. Apparently a course record was set there too, by William Huffman, 28, of New York City, a first-timer who had come out with “30 to 40” fellow members of the Full Throttle Endurance triathlon team based at Chelsea Piers and coached by Scott Berlinger.

Merle McDonald-Aaron, the race director, who had worried that not many would turn out, was happy to report that, in the end, there had been 275 registrants. In the past, as many as 700 have competed in the event, which comprises a one-mile swim, a 20-mile bike leg, and a 10K run. “There were a lot of first-timers this year,” she said, “which is good news, exciting for the sport.”

Huffman’s time was a very swift 1:46:00.3, bettering his runner-up and fellow Full Throttle teammate, Dixon McDonald, by about 12 minutes. Tim Steiskal of Brookhaven, Mighty Montauk’s 2018 champ and the recent winner of the Mighty North Fork Triathlon, was third in 1:58:56.3. “The water was calm, beautiful, the bike was tough, and the run, as always, was hilly,” Steiskal said.

Though Chuck Sperazza, in 2003, and Greg Sautner, in 2004, logged somewhat faster times, “the course was somewhat different then,” said McDonald-Aaron, who is treating Huffman’s time as the course record.

Huffman’s boss at FourSixThree Capital, William Kelly of Chatham, N.J., placed seventh in 2:05.22.8. But consider this: Kelly, who has twice been the overall Mighty Montauk winner, and an age-group champion around 20 times, he said, is 59.

Jacinth was fourth out of the water, but had, said Bisogno, the fastest female bike time, 54:24.

Alyssa Bahel won the female 25-to-29 age group. Bob Bottini won the male 65-to-69 age group, and Mike, his older brother, was second.