The team had its hitting shoes on in the second game 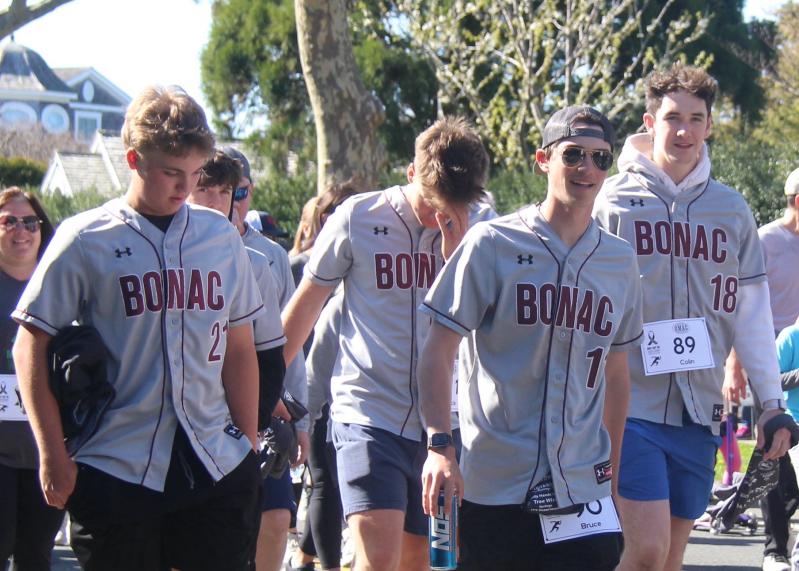 Will Darrell, a left-hander, took the loss, a game in which the Hurricanes scored four runs in the third inning and three in the fourth. "It was an off day," Vinny Alversa, East Hampton's coach, said. "We were facing their best pitcher, a lefty, who kept the ball down. There were a lot of ground balls . . . we had five or six hits."

Alversa had his ace, Colin Ruddy, ready for Westhampton here on the 27th, and while the visiting team's batters got six hits off him, including a first-inning home run over the center-field fence by the designated hitter, Frankie Noto, East Hampton had its hitting shoes on too.

After Ruddy struck out the side in the top of the second, the Bonackers took a 3-1 lead in their half, with Nico Horan-Puglia, Hudson Meyer, and Calum Anderson getting the r.b.i.s.

The Hurricanes came back in the third though. Ruddy gave up a leadoff single to Josh Aponte before striking out Anthony Donato. After Aponte had stolen second base, the pitcher, Ryan Knieriemen, hit a high pop fly into shallow left-center that Avery Siska, the shortstop, let drop. That put runners at first and second, and the next batter, Kevin Smith, loaded them with a single up the middle. That brought up Noto. With the count 2-2, he grounded a ball to Siska, who flipped it to Meyer, but the freshman second baseman arrived a half-step too late for the force there, allowing a run to come in.

With the bases still loaded, the cleanup hitter, Bobby Hill, drilled a 1-2 changeup into the outfield for two more runs, treating Westhampton to a 4-3 lead. Ruddy bore down then, getting Ryan Springer to pop out to Meyer at second, and, following a passed ball that allowed the runners to move up to third and second, struck out Riley Miller.

Scoring-wise, that was to be it for Westhampton.

East Hampton scored four runs in the bottom of the third. Ruddy led off with a walk, Carter Dickinson, the freshman cleanup hitter, drove a double to center field, and, with runners at second and third, Siska singled in Ruddy with the tying run. After Horan-Puglia and Tyler Hansen were retired, the former on a pop to short, the latter via a 6-3 groundout, Meyer came through with a run-scoring single, and Anderson, East Hampton's ninth hitter, followed suit, driving a 0-1 pitch to the base of the fence in left field.

Tyler Crispino, a left-hander, was then brought in to relieve Knieriemen, but Darrell, the first man he faced, lashed an opposite-field single to left that put his team up 7-4.

Nick Rizzo scratched out an infield hit to lead off the Hurricanes' fourth, but Ruddy struck out the next two batters -- Aponte and Donato -- before Knieriemen's popout to Jack Dickinson at third ended the inning.

Ruddy drew a walk from Crispino leading off East Hampton's half of the inning. Mike Locascio was brought in to run for him, but, with Carter Dickinson up, Locascio was cut down between first and second, after which Dickinson struck out. A subsequent walk to Siska, a line single by Horan-Puglia, a balk that advanced the runners to third and second, and a single by Hansen accounted for East Hampton's eighth run.

Ruddy gave up his sixth hit of the day, a two-out double by Hill to the left-field fence in the top of the fifth, but Hill was stranded at second as Ruddy threw out Springer on a comebacker to the mound.

The Bonackers made it 10-4 in the bottom of the fifth. After Anderson fouled out off the first-base line, Darrell doubled, and Jack Dickinson and Ruddy drew walks, loading the bases for Carter Dickinson, who drove Darrell in with a single. Jack Dickinson came home with East Hampton's 10th and final run on a subsequent force play at second.

Hunter Eberhart pitched the sixth and seventh, giving up no runs, one hit, and striking out four. Ruddy, who improved his record to 5-0, finished with 11 strikeouts, giving him 66 for the season.

The Bonackers are to begin a three-game series with Sayville here on May 3. They play at Sayville the next day, and are scheduled to finish the series here on Friday, May 6.