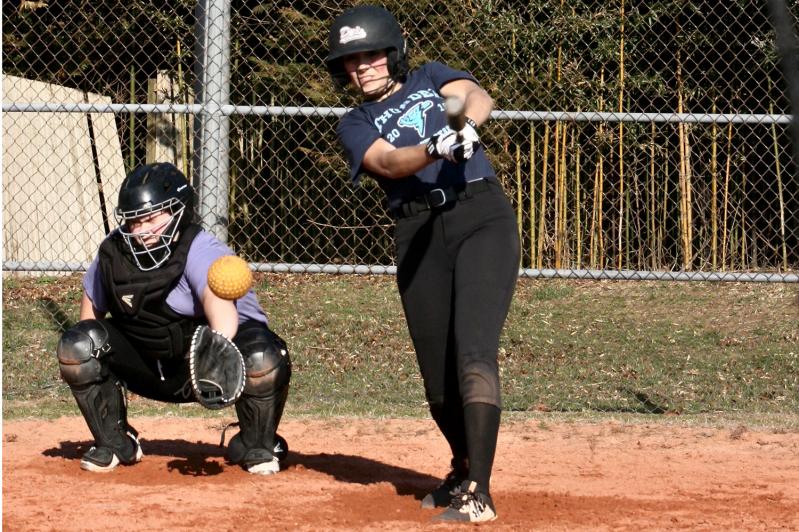 Leah Masi, seen above driving one up the middle during a practice last week, is one of only three seniors on East Hampton High School’s young but talented varsity softball team that was to have begun the season with a scrimmage at Hampton Bays yesterday.
Jack Graves
By Jack Graves

Last year, for the first time in more than a decade, an East Hampton High School softball team, a very young squad with only two senior starters, earned a berth in the county playoffs, convincing the coaches, Annemarie Brown and Melanie Anderson, that “we’re starting to get back on track,” in Brown’s words.

In her first year as the varsity’s head coach, Brown entered 10-U, 12-U, and 14-U teams in summer leagues, she oversaw 12-U and varsity entries in her second year, and headed a 12-U team in her third. The idea being, she said, to revive “Reale ball,” an effort that she and Anderson, both former Reale protégées, said is proving to be a success. Cousins, they were both college standouts — Brown at SUNY Cortland and Anderson at Bloomsburg University in Pennsylvania.

“We’re seeing the dedication and skills that the team had when Lou Reale was the coach,” Brown said by phone following Saturday’s practice. “They all play travel ball. They know the routine and they’re extremely coachable. Mel and I are extremely excited about the coming season.”

This season, Brown continued, will be dedicated to her late aunt, Anderson’s mother, Pam Anderson, a retired East Hampton High School mathematics teacher and multisport coach who died of cancer at the age of 68 on Feb. 27. In the obituary, the family had said memorial donations could be made to the Molly Cangiolosi Scholarship Fund, and Brown was happy to report that “in the past two weeks many have been donating and have been sending heart-felt letters with their donations.”

Molly Cangiolosi, Pam Anderson’s mother and Brown and Melanie Anderson’s grandmother, after whom the softball team’s dugouts are named, was an early champion of female sports here, years before Title IX came into being. Pam Anderson’s obituary said donations to the scholarship fund could be sent in care of Isabel Madison, 4 Long Lane, East Hampton 11937.

The varsity is carrying 14 on its roster, seven of them juniors, and the junior varsity, coached by Jenna Arnister and Carley Raynor, is also carrying 14.

Gabby Miller, said to be a strong hitter, and Alyssa Brabant are also up from the junior varsity. Katie Kuneth, the center fielder, is a sophomore, and Susie DiSunno, Caroline’s younger sister, a ninth grader, “can play anywhere and does everything you ask of her and more.”

East Hampton will be a good fielding team, “and the girls can hit too,” said Brown, whose squad was to have scrimmaged yesterday at Hampton Bays. A nonleague game is to be played tomorrow at Southold. The league-opener is to be played at Kings Park Tuesday, and East Hampton’s home debut is set for April 2 with Sayville, last year’s League V co-champion, with Islip, each with only one loss.

Mashashimuet Park's History and Future
A Conference for Young People to Create Solutions
Get Outside, Get Moving
END_OF_DOCUMENT_TOKEN_TO_BE_REPLACED