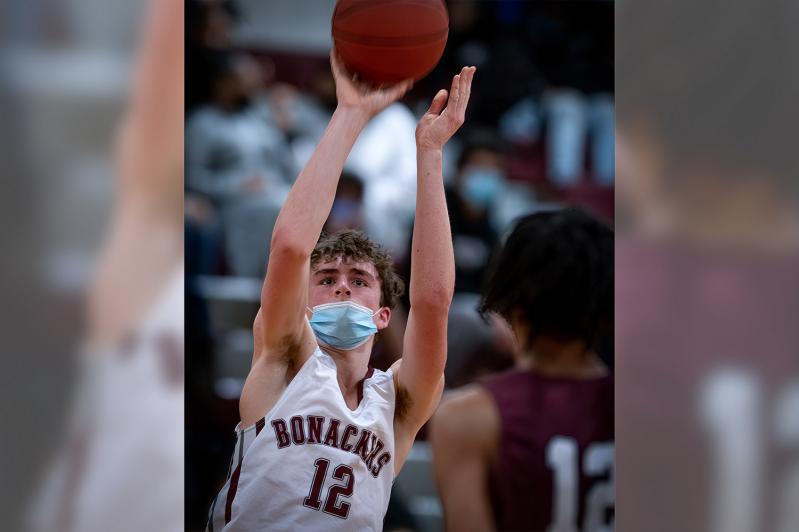 Cash Muse, a sophomore who began the season on East Hampton’s bench, is starting now. He scored 16 points for the Bonackers in their 69-60 Holiday Classic tournament loss to Southampton.
Craig Macnaughton
By Jack Graves

The first two and a half quarters of the Holiday Classic boys basketball game that East Hampton High played at Southampton on Dec. 28 “were the best we’ve played all year,” East Hampton’s coach, Dan White, said following the 69-60 loss to the Mariners — a game in which the spirited Bonackers led by 18 points with six minutes to play in the third period.

The 27-point swing, during which Southampton, a lightning-quick team, used run-and-jump full-court pressure to turn things around, began soon after Jack Dickinson, East Hampton’s stalwart junior power forward, had to sit with his fourth foul. White knew what was coming, but to counter that kind of press, “we gotta have Jack. With Jack and Luke,” he said of Luke Reese, who is out for the season with a knee injury, “we’d turn it into a layup drill.”

East Hampton had taken a 38-24 lead into the second half, and was leading 46-28 just after Dickinson came off, but the feverish press, consequent turnovers, and fast-break layups, some of which drew fouls, were to exact a toll.

Still, said White, there was good news, though it got lost in the shuffle at the time, in knowing that the four sophomores he had on the floor — Liam Fowkes, Mike Locascio, Cash Muse, and Ben Zazula — were doing a good job against a good team. “I don’t think I’ve ever had four sophomores on the floor at once — I’ve never had that in my career,” Bonac’s coach said. He would see to it, he added, that the younger players learned how to correct their mistakes from viewing the game film.

It was almost too good to be true for Bonac fans in the early going. With Dickinson, Finn Byrnes, and Muse holding their own under the boards and freeing themselves up for banked-in layups underneath, and with Fowkes and Hector Maldonado, a senior point guard, distributing the ball and knocking down 3s (Fowkes finished the game with five of them), East Hampton outscored Southampton 21-9 in the second quarter.

By the time the third began, East Hampton’s lead had been shredded to 8, and when Dickinson fouled out with six minutes to play “the wheels came off,” White said.

Something similar had happened in a first-round game with Riverhead: Dickinson had to come out with a banged-up knee early in the third. He re-entered the fray in the fourth, but by that time it was too late to avert a 60-51 loss.

Back to the Southampton game, the Mariners made good on 27 of 60 attempts from the floor, went 11-for-28 from the free-throw line, and shot 4-for-14 from beyond the 3-point arc. East Hampton made 24 of 48 field goal attempts, went 2-for-6 from the line, and drained nine of 19 shots from long range. Fowkes finished with 17 points and Muse with 16. Dickinson made the all-tournament team.

East Hampton is to begin the season’s second half today at Amityville, apparently not the powerhouse it usually is. “Onward and upward,” said White. “We’ll try to keep improving.”