Soccer dreams for one, a hoops program for the other 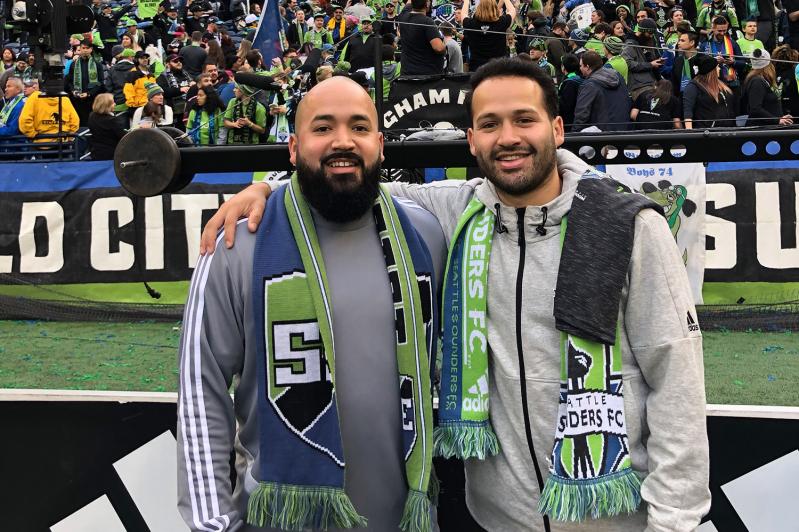 Nick Escalante is four years younger than his brother, Charles, which may have helped him sharpen his soccer skills when they played together in their backyard in California when they were growing up. Their first experience playing together was in the men’s 7-on-7 soccer league here and on teams in Riverhead and New York City.

“I was obviously older and much bigger than him at the time,” Charles recalled this week. “We would play until the sun went down and it was the type of thing where we’d say, ‘You have to score three times before we can go in for dinner.’ . . . My dad had to replace our windows with Plexiglas because we broke so many.”

Their paths have since diverged.

About three weeks ago, Nick, a popular teacher of wellness at the Ross School’s lower campus, left East Hampton for Buenos Aires to vie for a spot in a semipro soccer league. Later this month, he’s got a trial lined up in Los Angeles for the National Independent Soccer Association, a third-tier pro league that was launched in 2019.

“I started playing soccer at the age of 4 and I still have that same passion that I did as a kid for the sport,” Nick wrote in an email last week. “My dad and brother both played and enjoyed watching soccer on TV, so it was easy for me to fall in love with the sport growing up. As a kid, I always needed to have a ball at my feet.”

Charles Escalante is now busy building up the basketball program at the Ross School, where he is coaching varsity boys basketball after having developed prep school hoops programs over the past decade. (The Ross boys are 1-4 at the moment, and games were recently put on hold because of Covid-19.)

He recalled that “sometimes because of Nick, I got lucky. I’m decent — Nick’s obviously really at another level — but he gets invited places and sometimes they needed players and I could get on the field.”

What they still have in common, though, is a sense of competitiveness.

Nick said that getting to the semi-pro and he hopes professional levels takes “commitment, sacrifice, and hard work. I took a step back from this level of the sport for a few years now and look forward to making a comeback and putting my name back on the soccer map.”

And Charles taps into it on the sidelines as a coach. “I don’t want people to look at us and say, ‘Oh, we’re playing Ross, that’s an easy win.’ . . . At Ross, wellness is a priority, but not necessarily sports and competitiveness. You have to stay in the right mind-set, stay motivated to do things that you like in places where you might not get the benefit of the doubt.”

The 7-on-7 league here was a lot of fun, the brothers agreed. “I met some great people and, even better, lifelong friends,” Nick said. “I will definitely miss playing with my friends under the lights at Herrick Park.”

Nick played Division III soccer at the State University at Canton, where he tallied 35 goals and 20 assists in three seasons despite missing more than half of his senior season with an injury, and where he set a Division III record for most goals scored in a game — 5 in just 25 minutes. He also competed for the Santa Tecla pro team in El Salvador, and later played for the under-20 Salvadorean national team.

Charles didn’t play N.C.A.A. sports in college — on an academic scholarship, he focused on classes at the U.C. Santa Barbara and became a first-generation college graduate. He later taught and coached at the Hyde School before working as a teacher, athletic director, and coach at a junior high school in Red Hook, Brooklyn, where his eighth-grade girls team went 9- 1 and earned a league title. Several of those athletes went on to play at Grand Street Campus, a school known to send players to Division I colleges on scholarship.

The brothers also agreed that playing at such high levels has taught them a lot.

“Coming out of college, my mind-set was always to work as a team and have good communication,” he said. “Those are huge pillars in my professional life. Working hard, but not just working for yourself — collaboration, teamwork, dedication, perseverance. Sometimes things don’t go your way but you’ve got to keep pushing and another opportunity will come.”

“Soccer has taught me to be positive and live my life with little to no worries,” Nick said. “It has taught me to deal with the ups and downs in life, anticipate life with dignity, and how to handle success and failure. Soccer most of all has taught me that anything you desire in life, you have to work hard for — it will not be just given to you.”