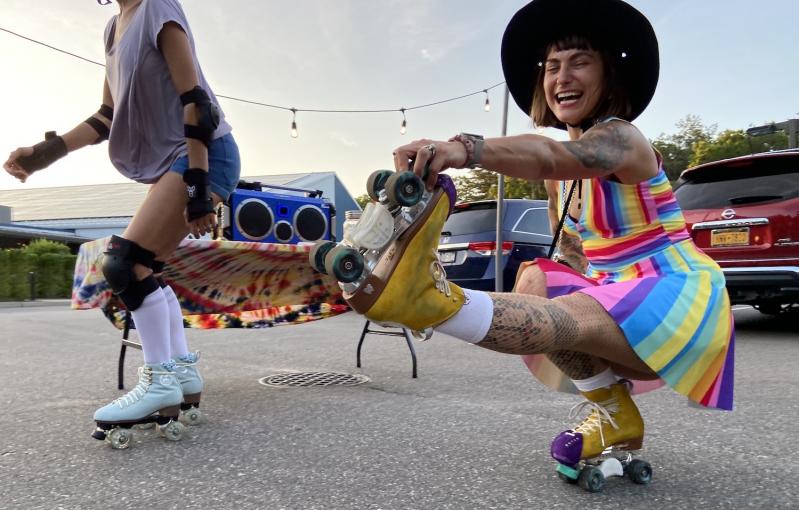 Last week, wearing a rainbow dress for her last skate of Pride Month, Samantha Duane both guided new skaters by hand around the makeshift rink and also pumped up the party with delightful dance skating.
Bella Lewis
By Bella Lewis

Samantha Duane of East Hampton certainly skates through life, but in her case that does not mean cutting corners as much as it does doing six-mile endurance skate workouts in the winter. And as of this summer, it means a $10 cover charge for warm, friendly skate gatherings that the ex-roller derby pro hosts Monday nights in the parking lot of the Clubhouse off Daniel's Hole Road.

From 7 p.m. to 9 p.m., through Labor Day, all ages and abilities are invited to take their own skates to the skate nights that Duane leads with far more than $10 worth of pep and spirit. She does it because she loves it, she said. "The cover charge just offsets the cost of hosting the thing."

Last week, wearing a rainbow dress for her last skate of Pride Month, Duane both guided new skaters, clad in protective gear, by hand around the makeshift rink, and also pumped up the party with delightful dance skating.

She did not always have such "twinkle-toes," she explained. As a personal trainer and yoga instructor, her skating career was very much an athletic matter. In North Carolina in 2006, Duane began playing roller derby and shortly went from there to Nashville, where she competed on the Women's Flat Track Derby Association team until 2012.

Serving as the travel team captain, she led the way to regionals three times. "As a skater, everything is D.I.Y., and low-brow. It's pure conviction and love of the sport and for the greater good, so that's something that has always been a driving force for me as an athlete, skater, yoga instructor, and trainer." Even when she worked as a bartender, she said, these avenues have been service roles where the point is to lift people up with her.

During the pandemic, her mind-set about skating as a form of exercise changed when she saw resurgent affection for artifacts of yore. "I kept seeing on Instagram people buying skates and getting back in touch with things like analogue board games or different exercise." As people stepped back into passions, and "jam" or dance skating in basements and kitchens took off, Duane saw an opportunity to connect again with the roller-skate community she had been missing since derby days.

"I was tired of having the feeling that I don't have what I want where I am," she noted.

Moving beyond her wheelhouse, she learned more dance skating and secured her slab of concrete at the Clubhouse, where usually 10 people of various abilities will roll around and inevitably find themselves at the receiving end of Duane's "Gimme-your-hand-let's-go-girl" energy.

A firm believer that there is power in a pair of skates, Duane was elated to show people how skating can teach them about themselves and how to relate to others. Having a sober activity is also nice, she noted; Cute outfits are what give skating that extra dash of fun. Of course, there is also the matter of the playlist.

Not just on these informal skate nights, but even during her solo skates in the dead of winter, it seems Duane always had the human connection part down. She described singing along to David Bowie in her earbuds and zipping down roads to the amusement of others who would "hoot and holler and wave and cheer."

"How much better is that person's day now that they saw my dumb ass skating around? It's a little drop of happiness in the bucket for someone else," she said