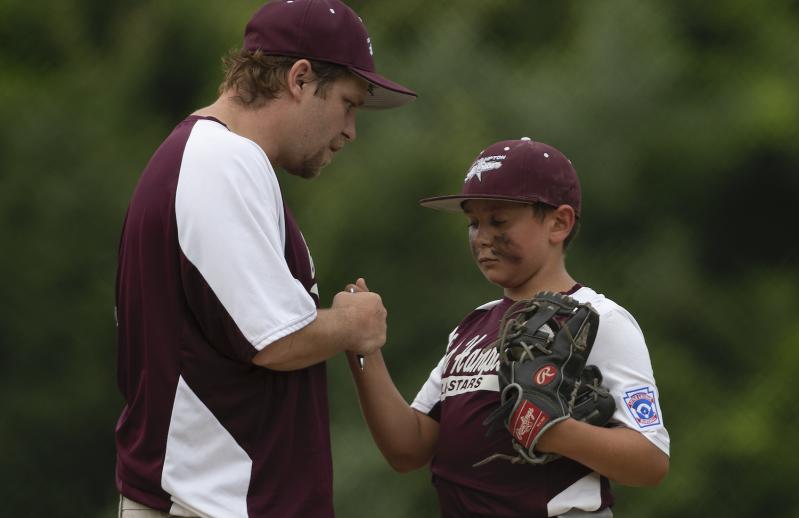 Elias Wojtusiak was somewhat downcast when Scott Abran, Ray Wojtusiak's assistant coach, removed him from a playoff game with Eastport-South Manor last week, but presumably his mood improved as the 9 and 10-year-old Bonackers went on to win.
Craig Macnaughton
By Jack Graves

Ray Wojtusiak's team went into the showdown at 5-0 in tournament play; Riverhead, which was to win the title game 17-7, went in at 4-1. East Hampton had defeated Riverhead 17-5 earlier in the tourney, Wojtusiak said, "but the rule is that the top two play in the championship game no matter what their records are."

Both teams, then, wound up at 5-1, "though you've got to hand it to Riverhead -- they hit extremely well that day after we'd taken a 4-3 lead into the bottom of the second."

East Hampton went up 1-0 in the top of the first as Colin Grisch, who had walked, successively stole second and third before coming home on a base hit by Elias Wojtusiak.

Riverhead scored three runs in the bottom half and had runners at second and third base when the Bonackers turned a triple play. "Aiden Stone made a sliding catch in right field, doubled up the runner at second, and the throw home to Ryan Balnis was in time for him to tag out the runner from third," the elder Wojtusiak said.

East Hampton loaded the bases with two outs in the top of the second after having taken a 4-3 lead, "but their center fielder made a great catch of a deep fly hit by Scotty Abran. Honestly, after that it was all Riverhead -- they hit extremely well. They played an outstanding game."

The Bonackers pulled to 16-7 in the top of the fourth as a double by Jake Daniels plated Alex Bobek and Wojtusiak, each of whom had singled.

At the Pantigo fields here on July 6, the 9-10 boys wound up defeating Eastport-South Manor 11-7, a long game that didn't end until the umpires, on seeing lightning in the dark, ominous sky, suspended play, and the opposing coach, who could have waited a half-hour for a final decision, conceded. Wojtusiak and Stone pitched for East Hampton that night. Those two and Grisch pitched against Riverhead in the championship game.

Others on the 9-10 team were Cayden Sokol, Jackson Cook, Casey Carney, Declan Balnis, and Kix Bock.