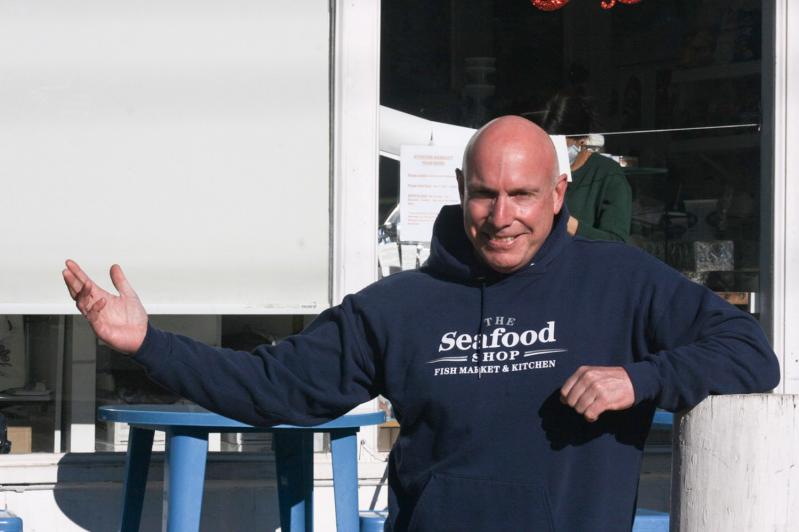 Colin Mather, the father of New Year’s Day plunges here, has asked that those who want to jog the 1.6 miles to Beach Lane from his Seafood Shop on Route 27 in Wainscott be there by 1:50 p.m. Saturday. The plunge is set for 2:30.
Jack Graves
By Jack Graves

Asked this week if the New Year’s Day plunges were on, Colin Mather, who began the annual ritual in Wainscott in 1999, and John Ryan Jr., the Hampton Lifeguards’ chief, who followed suit soon after first in Amagansett and later in East Hampton, said they were indeed.

Mather owns the popular Seafood Shop in Wainscott, from which he is to set out with however many choose to join him at 2 p.m. Saturday for a 1.6-mile jog to the beach. He said he had been inspired at the turn of this century “by a photo in The New York Times of guys and gals going into the North Sea in Holland. I said, ‘Gee, maybe I’ll do that.’ So I did, with two friends of mine,” Larry Burns and Richard Klamrogh. “I remember it being incredibly cold — there was slush ice on the ocean. Oy, oy. There’s a photo of me, my face is frozen solid. But, afterward, I felt fantastic. Wow! There’s something to be said for the healthy effect of cold water. Bill Romanowski, who played for the 49ers and the Broncos, sat in an ice bath after every game. Ice reduces inflammation, the swelling and the aches and pains. Every day I take a cold shower. It’s the cure for everything . . . like an electric shock treatment.”

“I remember there was one guy, Bill Knell, he was a real estate salesman, living on the North Fork, I think, now, who was always calling us idiots. And then one year I saw him down the beach out of the corner of my eye as we were going in. When we were coming out he comes rushing up to me — I think he went in in his underwear — shouting, ‘You were right! This is great!’ He’d changed his tune.”

Asked if he required that his sons, Jack, 14, and Joel, 12, do the same, Mather said no, but added that they joined him in the run from his shop to the beach and subsequent plunge last January, an “unofficial” outing because of the Covid pandemic.

The pandemic caused the 2021 Main Beach plunge to be cancelled, John Ryan Jr. said, though he has the East Hampton Village Board’s permission for the 2022 dip. Mask-wearing would be up to the participants and spectators, he said, adding that the participants — there have been several hundred in the past — would be spread out along the beach. “The weather forecast is in the 70’s!”

“Absolutely, I’m joking,” said Ryan, who, after taking a New Year’s Day plunge with Mather at the turn of the millennium, “decided to do one at Indian Wells.” The first year he challenged the Y.M.C.A East Hampton RECenter Hurricanes’ coach, Tom Cohill, to do it with him, “but he didn’t show. He didn’t think I was serious. We did it at Indian Wells for five or six years, and then Eddie McDonald said we should do it at Main Beach. When it was at Indian Wells, I remember Rich Kalbacher bringing a hot tub down in the back of his truck. One year, we had to cancel there because the beach was a sheet of ice, but people showed up anyway. . . .”

It was said on these pages that Ryan’s 2004 swim at Indian Wells drew 23 participants, including 10 Hurricanes, members of the Y’s youth swim team. John Ryan Sr., John Jr.’s father, telephoned that year from Rincon, Puerto Rico, to say he was taking a New Year’s Day dip too. With a plunger atop his head, he has since has been a frequent participant in the plunges here. “He used to send us photos with chunks of Styrofoam in the background . . . ‘icebergs,’ “ his son said.

Both plunges are raising money for food pantries, Mather’s for the one in Sag Harbor — it’s the third year that the Sag Harbor pantry has been his plunge’s beneficiary — and East Hampton’s for food pantries there and in Springs, Amagansett, Wainscott, and Montauk.

“We usually have about 100 swimmers and few hundred spectators,” said Mather, who agreed that one could do both, given that the village plunge is set for 1 p.m., and his for 2:30. “We coordinate with the village,” said Mather, who said plunging was “like a baptism into the New Year. You wash off the old year and welcome the new. I’m not a religious person, but I feel this, me and a lot of other people.”

Ryan said he agreed. “Absolutely, you work off the bad and bring on the good.”

Baylis Greene, one of this paper’s editors, said in 2004 that “the feeling falls short of pain, and for some reason the cold seems to hit you in your thighs more than anywhere else. In its brevity the experience indeed qualifies as refreshing.”

“Back on land, a faint numbness gradually leaches down into your feet. You don’t shiver — your core body temperature in unaffected. Instead, the subdermal layer of fat over every inch of your body feels cooled, and thus relaxed, a sensation that lasts into the next day.”

The Wainscott plungers and non-plungers too — “we don’t discriminate,” says Mather — are invited for chowder, hot chocolate, cake, and cookies at the Seafood Shop, a business he’s run since 2000 after having worked with its co-owner, the late John Haessler, for 13 years. “I’m here for a while — I’ve got kids who will go to college.”

Mather said he viewed himself as a caretaker. The shop would still be thriving, he predicted, “long after I’ve taken the biggest plunge.”