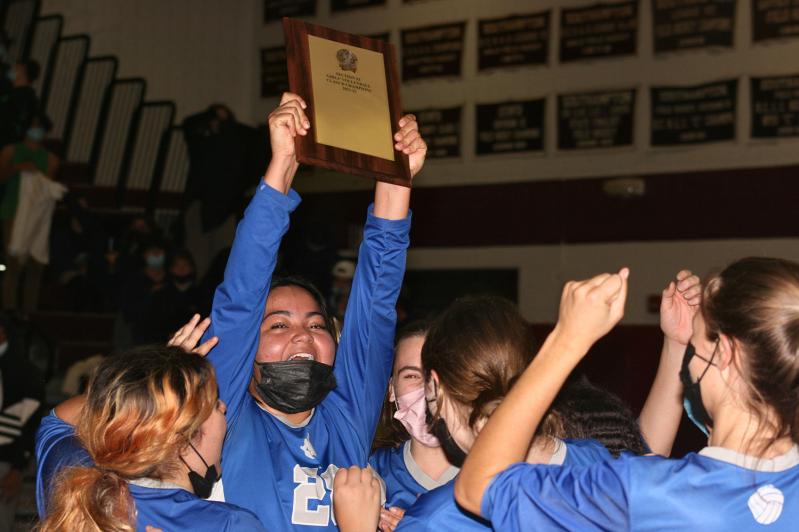 Cheered on by her teammates, Dayla Reyes, who nailed down Shelter Island’s Class D championship win over the Ross School with her serving run in the fourth set, lifted the championship plaque aloft.
Jack Graves
By Jack Graves

Cindy Belt, who coaches Shelter Island High’s girls volleyball team, and Ana Jacobs, the Ross School’s coach, are friends and have given clinics together over the years at the Sportime Arena, but they found themselves on opposite sides of the net in the Suffolk County Class D championship match at Southampton High School on Nov. 3.

Belt has coached Shelter Island girls volleyball teams at the county level many times, and three or four times in state Final Fours, though, for Jacobs and Ross, whose players she has coached since the school inaugurated a varsity two years ago, it was the first time.

Largely on the strength of the jump-serving of Leah Meyerson, an all-around senior athlete who arguably was the best player on the court, Ross won the first set rather handily, at 25-17, though the Islanders, with Dayla Reyes serving the final 4 points, gave notice that they wouldn’t go quietly.

And indeed they didn’t. After the Islanders had clinched the title in four (17-25, 25-21, 25-20, 25-14), thus earning the right to play today for a regional championship at Longwood High School in Middle Island, Belt said that in the three meetings between Ross and Shelter Island this fall, “the team that won the first set wound up losing. . . . We split in league play.”

It was Shelter Island, with Reyes serving, that jumped out to an early lead in the second set. Ross was trailing 17-7 before it began to come back, again with Meyerson blasting top-spun jump serves that narrowed the gap to 5, at 18-13.

A resounding kill by Meyerson that sided out for Ross was followed by two service aces from Chloe Hincapie, who, in 2018-19, played on that school’s undefeated middle-school team, bringing the Ravens to within 2, at 21-19.

Hincapie’s next offering sailed long, bringing Reyes to the line. Shelter Island returned a Meyerson kill bid, and the Ross outside hitter netted her second attempt, prompting Jacobs, with the score 23-19 in the Islanders’ favor, to call a timeout.

When play resumed, Meyerson put the ball to the floor, after which Luena Leitao, a junior middle, made a dazzling over-the-head one-hander that landed unclaimed, for 23-21.

With Isabella Hosey serving for Ross, a pass ing error put the ball back in Shelter Island’s hands, and the Islanders’ Frances Regan clinched the win with an ace.

At 1-1, the third set loomed large, and both teams wanted it badly for momentum’s sake. The score had been knotted five times by the time they’d reached 17-17. But thereafter, Shelter Island had the edge.

A netted serve by S.I.’s Lily Page helped pull Ross to within one, at 20-19, but Amelia Regan-McLaughlin, the Ravens’ setter, replied in kind, after which a kill by Myla Dougherty and a subsequent ace by Reyes that landed on the outside right corner of the baseline made it 23-19. The gym, which was filled with Shelter Island and Ross partisans, was in a roar.

With Reyes still serving, a bid by Leitao went wide, though Meyerson, set by Regan-McLaughlin, sided out with a kill, which sent Meyerson to the line, reviving Ross’s hopes. Though Reyes capped the rally that ensued — one of many in which the teams engaged that afternoon — with a tantalizing tip over the net that found the floor and put Shelter Island up 2-1.

Reyes was to nail down the lid in the fourth set, serving her team from 10-11 to 17-11 as the Ravens began to play more tentatively.

Jacobs called a timeout at 17-11 to try to rally her charges, but the die had been cast. A deep ace by the Islanders’ Angelina Rice made it 23-14. A double-hit call on Regan-McLaughlin made it 24-14, and Rice’s next serve won the championship for Shelter Island.

— actually for a Long Island one, there being no D schools in Nassau County — and to have participated in the pregame ceremonies, which included the playing of the national anthem and player introductions. The presence of a crowd was also beneficial, as the team had not been used to playing in front of one during the pandemic.

“Yes, the girls were disappointed, but I’m very proud of how far they’ve come. They did all they could. We’re thankful to have had the experience. It was good to be a part of it.”

She would continue giving off-season clinics for middle schoolers and high school players at the Sportime Arena in Amagansett, Jacobs added.

Belt said she expected that today’s opponent would be Mount Academy, of Esopus in Ulster County, which recently bageled Tuxedo 25-5, 25-4, 25-9 for its fourth-straight Section IX Class D championship.

Celebrate Hanukkah All Across Town and at Home
Stuffed With Turkey? Walk It Off
Blood Drive Tuesday in Bridgehampton
END_OF_DOCUMENT_TOKEN_TO_BE_REPLACED