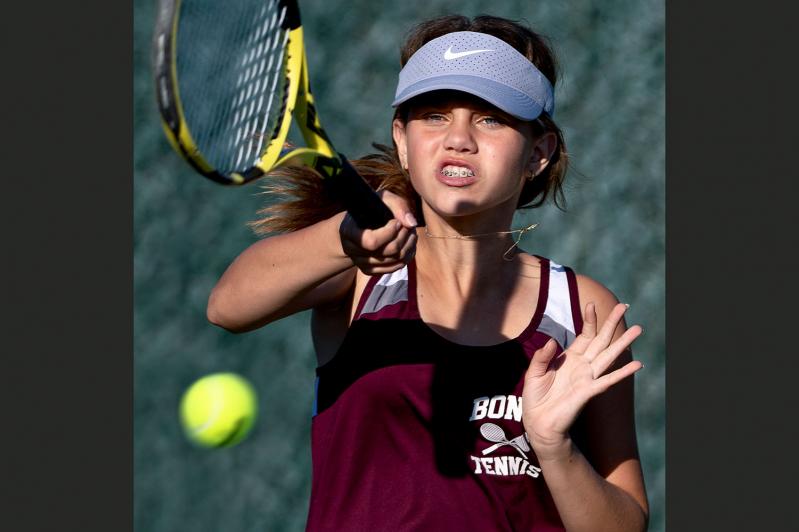 Maya Molin, one of a number of underclassmen playing on East Hampton High’s girls tennis team, stepped up from second to first singles in last Thursday’s regular season-ending match here with Miller Place, and won 6-0, 6-0.
Craig Macnaughton
By Jack Graves

East Hampton High’s girls tennis team, a number of whose players were new to the team when the season began, has improved greatly, in singles and in doubles, the coach, Kevin McConville, said following Saturday afternoon’s practice session, whose attendance was voluntary, but which attracted eight of the squad’s 13 members.

With a 12-2 regular-season record, East Hampton can expect to be the division tournament’s third seed, behind undefeated William Floyd and once-beaten Westhampton Beach. Thrice-beaten Sachem will be the fourth seed, said McConville, who is looking forward in the first round to a rematch with Floyd, a team that he thinks presents his players with better match-ups than with Westhampton Beach, which bageled the Bonackers 7-0 early in the season.

“We’re a good young team that can pull off an upset somewhere,” McConville said. “We’re way better than we were when we began.”

East Hampton won three singles matches and two doubles matches in a recent meeting with Sachem, Sandrine Becht, the team’s sole senior, winning at one, Maya Molin at two, and Audrey Monaco at three. The winning doubles pairings were Rachel Monaco and Lilly Somers at two, and Sam Pillco and Caleigh Barletta at three.

In the regular season finale, here on Friday, McConville’s crew shut out Miller Place. The coach played Becht with Riley Roesel at first doubles that day so that his best player — and best volleyer — could get in the required number of doubles matches to make her eligible to play doubles in the postseason.

Maya Molin, whose father, John, played in the U.S. Open in 1979, played at first singles that day, winning 6-0, 6-0. Audrey Monaco won in like manner at two, and Somers and Stella Peterson were winners, as well, at three and four.

“The most obvious improvement has been in our doubles play,” said McConville, who is the head professional at Hampton Racquet. “We graduated all of last year’s doubles players, so it was pretty much of a clear slate. You’ve got to get them comfortable not only with strategy — the aim being to get both players to the net — but also familiarize them with all the doubles shots and when to execute them. It takes a while, but we’re there now. Anyone on the team can play doubles.”

“The whole first part of the season,” when it comes to doubles, “is tryouts, basically.”

“The singles players have also improved. The idea there is to make them complete players, not just baseliners. You want them to know they have options, that they don’t just have to stand on the baseline, hit it up the middle and hope. Now, they can hit to the left, to the right, deep, short, and mix in some drop shots. They’re using angles, depth. . . . There’s more to it than just being a backboard.”

His second (Molin), third (Audrey Monaco), and fourth (Lyla Wilson) singles players, underclassmen all, were now virtually interchangeable, McConville added. Not only that, but his subs, Pilarski, Arely Gutierrez, and Stella Peterson among them, have been playing very well of late.

“I’m really happy with our development — in singles and in doubles,” said the coach, who is in his fifth year. “We’re best in team matches when we have Sandrine, Maya, Audrey, and Lyla playing singles, though in the divisional individual tournament that’s to be played at Shoreham next weekend, Sandrine will play doubles.”