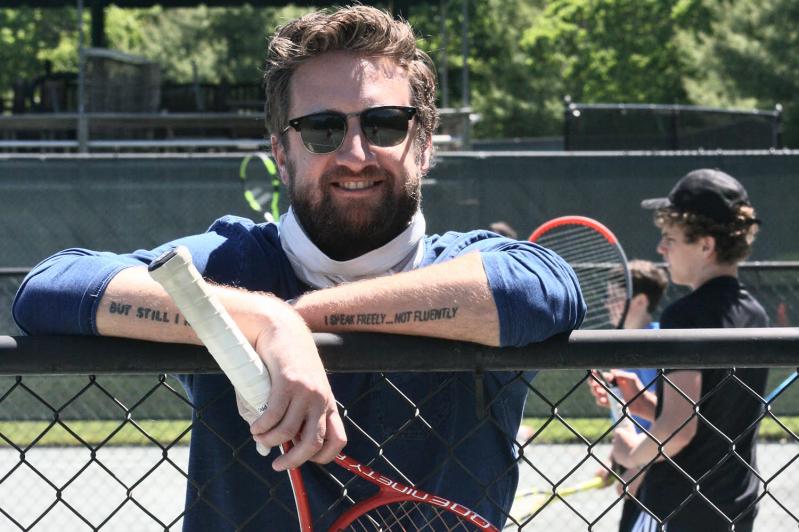 Matt Rubenstein, who graduated in 2004, was the state runner-up in boys tennis that year, the U.S.T.A.’s top-ranked 18-year-old in the East, and a high school all-American.
Jack Graves
By Jack Graves

The late Sprig Gardner, known as “the father of New York State wrestling,” following graduation from Franklin & Marshall College, began his distinguished career here in 1930, coaching football, wrestling, and baseball for three years before moving west to Mepham High School in Bellmore, where wrestling teams under his mentorship enjoyed 100 and 130 meet and tournament winning streaks spanning 1937 and 1955.

His Mepham teams so dominated the sport that the program was featured in Life magazine. Gardner, who is also a member of the National Wrestling Hall of Fame, the New York State Hall of Fame, the Nassau and Suffolk Halls of Fame, and Franklin & Marshall’s Hall of Fame, retired here. A tournament named for him has been contested annually at East Hampton High School at Christmastime.

Dick Baker, who played on the 1965-66 boys basketball team that was inducted last year, and who, in his 70s, is a nationally ranked singles badminton player, was also a four-year starter on East Hampton’s golf and baseball teams when he was a student here, in addition to starting for the 1966 basketball team that finished the season ranked third in the county with a 19-2 record.

Matt Rubenstein, who graduated in 2004, was the New York State runner-up in boys tennis that year, was the U.S.T.A.’s top-ranked 18-year-old in the East, and was a high school all-American, in addition to being all-Long Island in boys cross-country. He went on to play four years of Division 1 tennis at William & Mary, leading the team in his freshman year to its first conference championship in years. For the past decade, he has taught tennis at the East Hampton Indoor/Outdoor Tennis Club in Wainscott. A number of the youngsters he’s coached have gone on to play for the high school’s tennis teams. Thomas McGintee, who lives in Maine, was a three-year varsity baseball player here, and was a letter winner in boys volleyball, and winter track as well.

He captained the baseball and volleyball teams in his senior year, was all-county that year in both sports, and set baseball team records in batting average and doubles. He went on to play Division 1 baseball at Davidson College in North Carolina.

The 1965-66 wrestling team, whose lineup comprised Thom Bahns at 98 pounds, Don Schulte at 106, David Hamlin at 115, Pat Ryan at 123, Roy Cary at 130, John Henry Albert at 136, Kent Metz at 141, Robert Sucsy at 148, John Geehreng at 157, William McDonald at 166, Steve Cary at 183, and Jim Miller at heavyweight, was an undefeated league champion, with lopsided wins over Southampton, Bayport, Westhampton Beach, William Floyd, Bellport, and Longwood.

The wrestling team was one of a number of league-championship teams the high school had in the 1965-66 school year.

The 2009 girls volleyball team was one of more than half a dozen undefeated teams Kathy McGeehan, who retired last year, coached during her 38-year career here, though it was the only one of her squads to go upstate, after sweeping through the county Class A tournament and defeating Wantagh for the Long Island championship.

As for when the class of 2020 would be inducted, Schneider, who heads the school’s Hall of Fame committee, said he wasn’t sure. Usually, the induction takes place the Saturday morning of homecoming in the fall.

Spring Has Sprung at the L.V.I.S. Shops
An Online Auction for ARF
A Rescheduled Telephone Town Hall With Lee Zeldin
END_OF_DOCUMENT_TOKEN_TO_BE_REPLACED