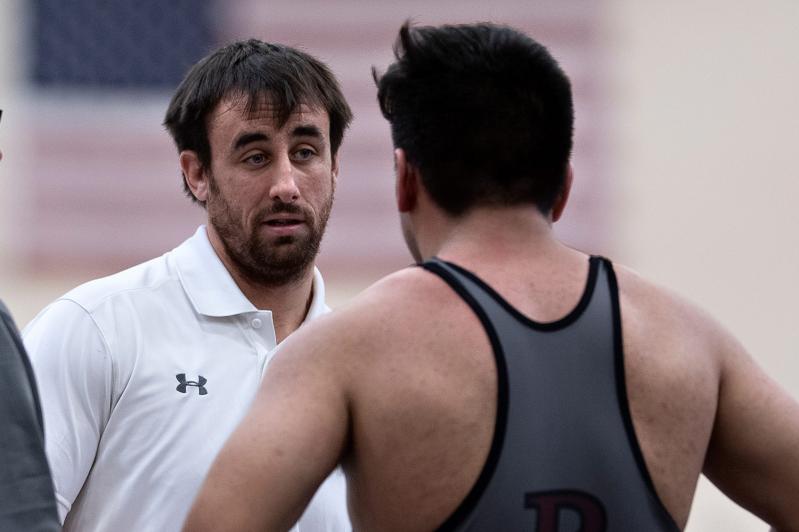 “We’re not looking for kids just to be wrestlers,” Ethan Mitchell said during a conversation at East Hampton High School the other day. “We want them to play other sports — soccer, football, baseball, lacrosse. . . .”

Wrestling, in short, was not only good for the body, but also for the mind and spirit, said Jim Stewart’s assistant, the best sport in his opinion when it comes to preparing one for life.

“Outside of getting you into shape, which is valuable when it comes to playing any other sport,” Mitchell continued, “the mental work you get in wrestling is great for developing confidence and self-reliance. There’s no one out there on the mat but yourself — you have to handle adversity on your own. You can’t make excuses — a missed block, a bad pass, the coach doesn’t like me. . . .”

“And when you’re being taken down, there’s no time to dwell on it. You have little time to recoup, to refocus, as you do in other sports. Wrestling requires quick thinking and mental toughness. There are no timeouts, no huddles. Plus there’s a spotlight on you — people can tell if you’re putting everything into it or not. If you’re not, we don’t tell you you’ve failed — we say you haven’t accomplished your goal of doing your absolute best yet.”

The sport here, which had seemed to be in a swan dive a couple of years ago, seems as if it’s about to soar again, thanks to the good offices of Stewart, East Hampton High’s longtime varsity coach, Mitchell, a recent arrival from Westhampton Beach, where he wrestled and coached, and Steve Redlus, who’s overseeing the East Hampton Middle School’s legions, which at last count numbered 45, about five more than last year.

Asked if those seventh and eighth graders were sticking, Mitchell, who came back to wrestle for Westhampton’s national Hall of Fame coach, Paul Bass, and in college, after a discomfiting pin in seventh grade prompted him to give up the sport for a few years, said most were, though his and Stewart’s goal was, of course, to keep them all.

The middle school team, which had wrestled about 60 of the 85 matches contested at a recent quad meet at the high school with East Moriches, Hampton Bays, and Mattituck, had “looked wonderful. . . . I loved their effort and attitude. Win or lose, they’d walk over and shake the other guy’s hand and the other guy’s coach’s hand. They didn’t say anything — they just wrestled.”

It wasn’t all guys: Sadie Campsey, a seventh grader who apparently is the first female to compete interscholastically here, “put fear into the boys who were watching her warm up — she looked like she had the experience and confidence of a fifth-year varsity wrestler . . . she had that match swagger.”

Yes, Mitchell said, she had won both her matches — the first by pin — though team scores, he added, weren’t kept.

The middle schoolers were to have wrestled yesterday at Greenport, and are tentatively to compete in a Section XI middle school tourney at Port Jefferson on March 18 with the host school, Hampton Bays, Mattituck, Southold, East Moriches, and Eastport-South Manor.

East Hampton’s varsity, which had all the weights covered for the first time in a long while, sent two competitors — Santi Maya, a sophomore, and Nick Lombardo, a 195-pound first-year senior, to the recent county tournament.

Maya lost in the wrestlebacks’ “blood round . . . the first match of the second day” in triple overtime to the eventual third-place finisher, Mack Murtha of Sayville, a 113-pounder who had pinned Maya earlier in the season.

To call Lombardo, who lost in the first round, “a first-year wrestler” was overstating the case. “He’s really an 11-week wrestler,” Mitchell said. Just to get to the counties was a feat, he added.

Another county hopeful, Caleb Peralta, a 126-pound junior, had been “unlucky. . . . In the leagues he lost in the first round to the kid from Hauppauge who was to win the leagues and the counties. So, Caleb didn’t qualify for the county tournament. Of his nine losses this season seven were to state or county champions. He’ll be wrestling in The Show next year.”

As for next year’s varsity season, “I’m excited. As far as seniors go, we’re only losing five, and only one of them had any experience before the season began. We’re retaining most of what we’ve had, and we’re going to gain a lot of kids with two years of experience who are eighth graders now. . . . We’ll wrestle in the spring and summer too, freestyle and Greco-Roman, lift weights, and go to a camp at Kutztown University in Pennsylvania this summer. . . .”

And, yes, the Frank (Sprig) Gardner tournament, which East Hampton, Gardner’s first stop in his Hall of Fame coaching career, hosts, would be revived. “We’ve already begun talking to coaches [about entering teams]. It’s like a mini family, the Section XI coaches — we spend entire days together at invitational tournaments. They made other plans this past year, thinking wrestling was on the way out here, but this season the compliments we’ve been getting have been awesome.”