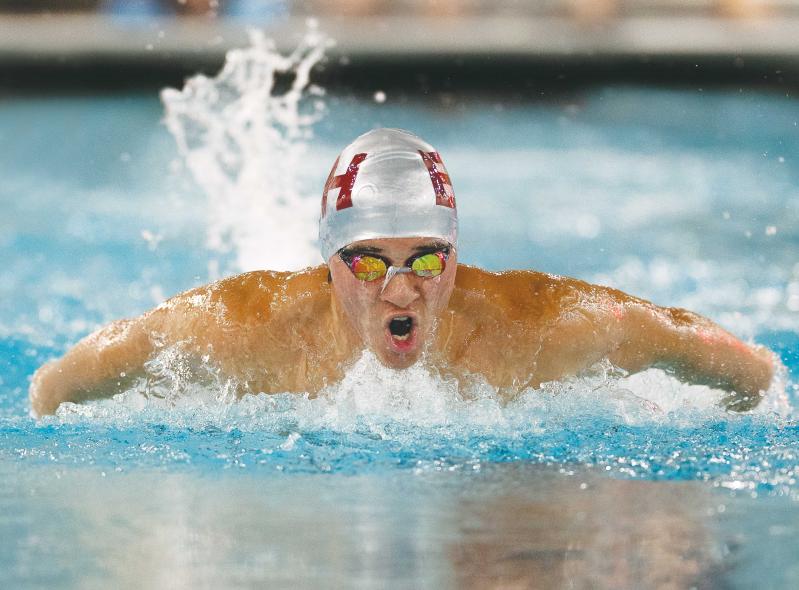 Joey Badilla, above, was named swimmer of Friday’s meet with Northport for having swum a season-best time in winning the 200-meter individual medley, swimming the backstroke leg on the winning 200 medley relay team, and for anchoring the 400 free relay B team that beat out Northport’s A team for second place.
Craig Macnaughton
By Jack Graves

While the news hasn’t been all that great on the basketball court here, either for the boys or the girls, things have by and large been going well of late at the Y.M.C.A. East Hampton RECenter.

East Hampton High’s boys swimming team improved its League II record there to 4-0 this past week as the result of lopsided wins over North Babylon, on Jan. 8, and over Northport on Friday.

Craig Brierley, East Hampton’s coach, said in an email Monday that “our boys continue to swim very well and are showing nice improvements in the skills and techniques they have been practicing.”

The Bonackers defeated North Babylon 86-75 and Northport 82-75, though Brierley “exhibitioned,” i.e., did not score swimmers in the final four events in both meets.

Consequently, East Hampton went into this week sharing the League II lead, at 4-0, with Hauppauge, which was to have swum here Tuesday. East Hampton travels to West Islip today, and Sayville-Bayport (3-1 as of Monday) is to swim here at the Y next Thursday at 5 p.m.

Brierley said that versus North Babylon “the Bonac boys took first and second in the first event, the 200 medley relay, and never let up, finishing first in 10 of the 11 events.”

As for Northport, Brierley said, the team “has some very talented front-line swimmers, but unfortunately they arrived without some of them, and the meet did not turn out to be as competitive as we had anticipated.”

As was the case in the North Babylon meet, East Hampton was to win 10 of the 11 events, beginning with the Badillas and Menjura and McCormac in the opening 200 medley relay.

Following a 10-minute break, Forst won the 100 fly, extending East Hampton’s lead to 60-18, the meet by then well out of the visitors’ reach.

The Bonackers went one-two, with Menjura and Midson, in the 500 free, after which Harrison, Duryea, Forst, and McCormac won the 200 free relay. It was at that point that Brierley began forgoing points.

Sarlo was named swimmer of the Jan. 8 meet, “the second time that this honor has been bestowed on him by the captains. . . . At the beginning of the season, Daniel took a liking to the 500 freestyle event and asked if he could swim it in every meet. Every time he has improved his time, dropping over four minutes from the beginning of the season — a testament to his hard work and dedication to the team.”

Joey Badilla was named swimmer of the meet Friday, for having “gone a season best in winning the 200 I.M., a lifetime best in winning the 100 backstroke, and for having anchored the B 400 free relay team that beat Northport’s A team out for second place. It was nothing new for Joey, but the captains appreciate Joey’s commitment to the team’s success.”