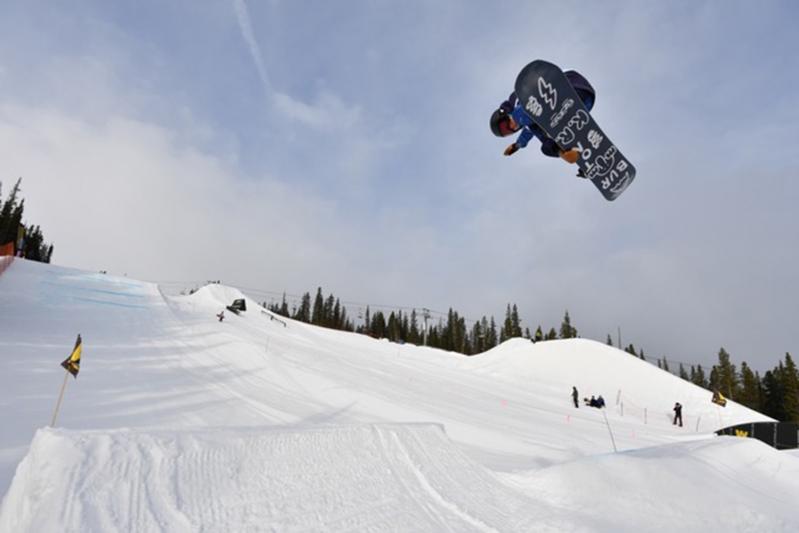 Noah Avallone did his first 720 in competition in the national championships’ slopestyle event.
By Jack Graves

Noah Avallone’s snowboarding résumé continues to grow, and to astound. The 11-year-old part-time Montauker has finished no worse than second in United States of America Snowboard and Freeski Association national championships over the past five years — a win crowning his latest competition, at Copper Mountain in Colorado at the end of last month.It’s been quite a run: He was second in the Ruggie (7-and-under) division in 2015, first in the Grom (8-to-9-year-old) division in 2016, first in that division in 2017, second in the Menehune (10-to-11-year-old) division last year, and, as aforesaid, a winner this year.A snowboarder first and foremost, Noah, whom this writer visited at his parents’ Navy Road house in Montauk Saturday, is also a top-notch surfer — he’s an Eastern Surfing Association all-star — and a skateboarder. A paddleboarder too.He excels in all the snowboarding events — halfpipe, slopestyle, slalom, giant slalom, and boardercross — a smorgasbord of events that he will have to pare down eventually, Noah’s father, Mike, said. “He spreads himself thin. He has to train in each one, and there’s less and less time to train. At the higher level there will be scheduling conflicts too. Usually, halfpipe and slopestyle are together, and the racing events — slalom, giant slalom, and boardercross — are completely separate. He won’t be able to do them all; it will make it that much more difficult to excel.”“By the time he turns 16, if he wants to turn pro, he’ll need to have one or two events max.”Asked if there are academies for aspiring snowboarders — the Avallones, who also live in Long Island City and have a house in Jamaica, Vt., where they spend winter weekends — Noah’s father answered in the affirmative. There were a number of them, he said, at Killington, Stratton, Okemo, Mount Snow. . . . “Most of the kids in the national top 10 are either homeschooled or going to academies, where they snowboard in the morning and take classes in the afternoon. You get more time on the snow, but they’re expensive . . . the main benefit being the education they receive, of course.”Noah landed his first 720 (two full rotations) in competition in the slopestyle event this year. “You progress in increments of 180 degrees. . . . Shaun White does 1,440s, four full rotations,” said the elder Avallone.The Avallones, father and son, had set three goals this year, all of which have been met. The first was to repeat as the Next Gen (under-11) winner in the Mount Baker (Wash.) Legendary Banked Slalom, which Noah did in February. The second was to get invited back to the Burton U.S. Open Junior Jam halfpipe competition in Vail, Colo., and the third was to win an overall national championship. Check, check, and check.“He was 13th out of 18 in the Junior Jam, which included kids as old as 14,” said Mike. “Aside from another 11-year-old, one 10-year-old, and one 9-year-old, he was the youngest kid there, but it was great because he was hanging out with the greatest riders in the world. His idols were there and all the best coaches in the world. It used to be the most prestigious snowboarding event in the world, before the Olympics and X Games came on the scene. It still is considered by many as one of the greatest events in snowboarding. You can see the replay of Noah’s runs on YouTube.”At the USASA national championships, Noah won two of the five events, the slalom and giant slalom. He was fourth in the halfpipe and sixth in slopestyle. He crashed in boardercross — a downhill in which four competitors race alongside one another on a lightly banked course — the result of having been run into, which was too bad, said Mike, inasmuch as his time-trial time had been the fastest.And next year’s goals? “To get invited again to the Burton U.S. Open Junior Jam again, to race again in the Mount Baker Legendary Slalom, and to compete for the USASA overall championship again,” said Noah’s father. “He’ll be moving up to Breaker Boys, the 12-13 division. He went up against 75 kids this year; next year, it will be almost 100. It gets tougher every year.”It should be added that Mariella Avallone, Noah’s 9-year-old sister, placed third in the nationals, in the Grom division. “She mostly competes against herself in the southern Vermont series,” said Mike, “but there were more girls to compete against at the nationals, 21 of them, which was good because going up against your peers gives you a chance to see where you stand, and it gives you a chance to make friends too, while you’re waiting for your turn. There was a girl from China, a 7-year-old, who was unbelievable. China’s making a big push in snowboarding. They’re having the winter Olympics in Beijing in 2022.”Noah’s ultimate goal is to be an Olympian, perhaps in 2026. He’ll be too young three years hence.No slouch in surfing, Noah won the E.S.A.’s U14 Menehune Longboard competition in September at Nags Head, N.C., and received the sportsmanship award, as well, for having helped a fellow competitor safely to shore after his leash had broken in heavy surf during a heat. Whether it be snowboarding or surfing, “He’s going to try to do as well or better than he has in the past,” Noah’s father said, “and continue to have fun and improve. He’ll try to be as good as he can be and, hopefully, that’s enough to win.”