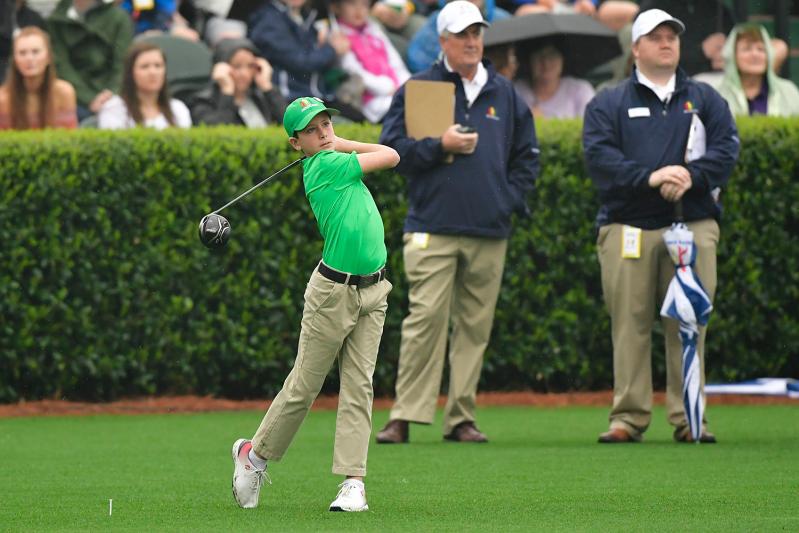 “A pretty swing . . . high extension on the follow-through,” a Golf Channel announcer said as 12-year-old James Bradley of Springs launched a drive at Augusta National.
By Jack Graves

When Scott Bradley, in answering a question at Montauk Downs Friday afternoon, said he thought his 12-year-old son, James, who recently played in the national Drive, Chip, and Putt finals at Augusta National, had shown “steady improvement” in his game of late, James shook his head.“I wouldn’t say that — my game’s improved drastically in the past couple of years,” he said brightly.It was good to hear, for whatever disappointment James may have initially felt on finishing ninth among the 10 regional qualifiers in the aforementioned national contest — a result to a degree foreordained owing to the fact that he was up against taller and heavier, and in many cases more experienced, competitors in the boys 12-13 division — had obviously vanished.He had done “okay,” James said when questioned. There was not much more he could have done; nothing, really. He had done his best, he said with his customary equanimity, with the assurance of someone who knows that the best is yet to come.“He was a winner just qualifying for the nationals,” said his father, who regularly plays with his son at the Downs. “Gina and I were very proud of him. He was outgunned, through no fault of his own. I keep reminding him that he’s only 12.”“He did very well . . . it was an awesome experience,” said Kevin Smith, James’s coach and the Downs’s longtime head golf pro, who went down to Georgia with the Bradleys. It was, he told his charge, just a matter of time, that as he grew taller and stronger the requisite balance and stability — and the longer drives — would come. The mental equipoise, so necessary when it comes to succeeding in athletic competition, the Springs seventh-grader seems already to have.  “My coach has been so helpful — he’s been a huge part of my success,” volunteered James, who practices at the Downs six days a week.“In the middle of the winter,” Scott Bradley interjected, “you’ll see Kevin and James sweeping the snow off the mats and Kevin working with him for an hour, four or five days a week.”“I can’t thank him enough,” said James, who was wearing a blue Drive, Chip, and Putt windbreaker and a white Drive, Chip, and Putt cap.Scott said his son liked playing in front of a big crowd — the Golf Channel televised the Drive, Chip, and Putt finals. All the attention hadn’t thrown him off. “He was able to stay focused — he can block everything out.”Well, not all the time, said James. He had to work on focusing better when not in tournament situations.Sometimes he got frustrated, they agreed, but, as Scott said, “you have to let it go and move on to the next shot.”“Play it as it lies,” this writer said.“‘Take dead aim,’” said James’s father, quoting one of the late Harvey Penick’s famous maxims.“I’ve got a lot of events planned,” James said, anticipating his interviewer’s next question. “I’m not looking to win the bigger ones, the [four-day] American Junior Golf Association events, but I want to do them and get points so I can play at an even higher level. I’m also playing 20-plus Met P.G.A. junior golf tournaments. . . .”“Twenty?” said his father.“Well, in as many as I can, throughout the summer. I’ll try to win those. I’ll play the bigger events to get experience.”And what about the Augusta course? “It was amazing,” said James. “The grass was dead perfect, nothing was out of place.” And there were so many rules. Very strict. But he had gladly put up with them. He had met Bubba Watson, Rich Lerner and Frank Nobilo of the Golf Channel, Fred Wrigley, Augusta’s chairman, Condoleezza Rice, the former Secretary of State, and Annika Sorenstam.He and his parents and Smith had stayed to see Monday’s practice round. Indeed, it had been a great experience.And did he still want to win the Masters some day, as he has said in the past?Oh, yes, James said in parting.Meanwhile, he will do everything he can to qualify for next year’s 12-13 finals.“He’ll have his growth spurt,” Smith said the next day during a telephone conversation. “We’ll keep on working on things and see where it takes us.”