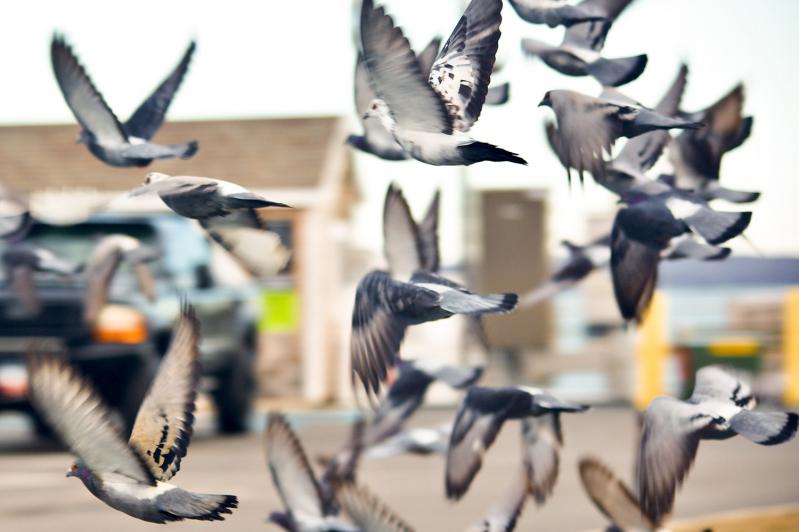 These pigeons live on Long Wharf in Sag Harbor, where they are treated like a collective pet for the village.
Keith Douglas
By Christopher Gangemi

Woody Allen, through a character in his film “Stardust Memories,” called pigeons, “rats with wings.” Like any good slur, it’s wrong, but sticky. Let’s try to unstick it.

“The first thing to be said about your common pigeon,” said Charles Walcott, former director of the Cornell Lab of Ornithology, “is that they’re really extraordinary animals.”

Egyptian hieroglyphics depict pigeons. They carried messages during both world wars, and, according to Mr. Walcott, were “brought over by the settlers as an important food source.” So, this boring bird has played a long and important role in human history.

He ticked off three ways in which pigeons experience the world in a completely different manner than humans. They are extremely sensitive to low frequency sounds; they can see into the ultraviolet range of light, and they are able to detect minute changes in air pressure. For example, pigeons, he says, “can detect the pressure difference between the floor and ceiling of an average home.”

Another cool thing? They use their bills like straws. They can just suck the water right up, instead of tipping their heads back like other birds. Impress your city friends with that little tidbit next time you see some pigeons near a puddle.

Each week, I write this column profiling a bird that you could see just after you read it. In the winter, you won’t find me writing about snowy egrets, for example, because they’re only around in the summer. Pigeons don’t migrate. I chose this week to write about them because of something incredible I recently witnessed.

I was on Long Wharf in Sag Harbor, looking at long-tailed ducks, wondering what the hell everyone else was doing with their time. Just then, a peregrine falcon flew over my head with another bird: a pigeon. I thought I’d soon witness a murder, but instead, the pigeon flew straight up towards the clouds. What was happening here? I watched, rapt, for minutes, until it became the size of a tick against the sky, and then nothing. Just then, someone asked what I was looking at, a car horn honked, and the spell was broken.

Mr. Walcott didn’t know what was happening between the falcon and the pigeon. My somewhat romantic theory was that the pigeon was sacrificing itself to the falcon and drawing it away from the loft (the term for a group of pigeons) who live by the windmill. Or, perhaps by flying higher it was removing the falcon’s advantage of hunting from above. Either way, I watched a sidewalk pigeon fly to heaven, and the week’s subject bird had presented itself.

Pigeons are so common that I won’t discuss their plumage, other than to say there are different color morphs. The most common variety is gray and is called the “blue-bar” morph. In Sag Harbor, where there’s a resident group of maybe 50 pigeons, there are now at least three varieties. Pigeons also hang out at Gosman’s in Montauk and at the Bridgehampton Commons. They have storied navigational abilities. You could, if you were evil, capture one of our East   End pigeons, blindfold it, drive it to Central Park and let it go. It would find its way back to the Hamptons, just like a summer person.

According to allaboutbirds.com, the male pigeon selects a nest site, usually on some sort of ledge, and then proceeds to coo until he attracts a mate. If the cooing doesn’t work, like some humans, they strut. If strutting doesn’t work, unlike humans, they regurgitate food into their lover’s bill. Pigeons don’t keep the tidiest of homes. They allow feces, and even dead nestlings, to remain in the nest. Since they reuse their nests, they get bigger and nastier as time goes on. Where is Marie Kondo when you need her?

People are drawn to pigeons. Nancy Remkus, a lifelong resident of Sag Harbor, often walks the wharf. “I said to a friend . . . that it felt as if they were my pigeons (in spirit) and he said that there are a number of people who feel the same way.” They are like a collective pet in Sag Harbor.

Perhaps we are drawn to them because they’re so present in our lives. In college, in what could be called a proto-spark bird experience, I watched as a peregrine falcon ripped a pigeon to shreds from a perch on the campus library. I related with the pigeon. I once left my dorm window open all day, in an enthusiastic welcoming of spring, and came home to find a dozen roosting pigeons above my bed. One final college memory of pigeons is when I fell asleep at the base of the Peace Fountain at St. John the Divine (don’t ask). I woke up surrounded by pigeons. I might have continued sleeping, but one jumped on my head.

A few years later, working downtown on a clear day in September, I was in a park on West Street, two blocks from the World Trade Center. Pigeons burst from the ground seconds before a plane passed impossibly low overhead, closing some chapter of life just before a large explosion started the next.

When pigeons are alarmed, they fly in the air and circle several times before landing. I imagine those World Trade Center pigeons circled for quite a while.

Please send sightings in to [email protected]. Next week I will report them here.