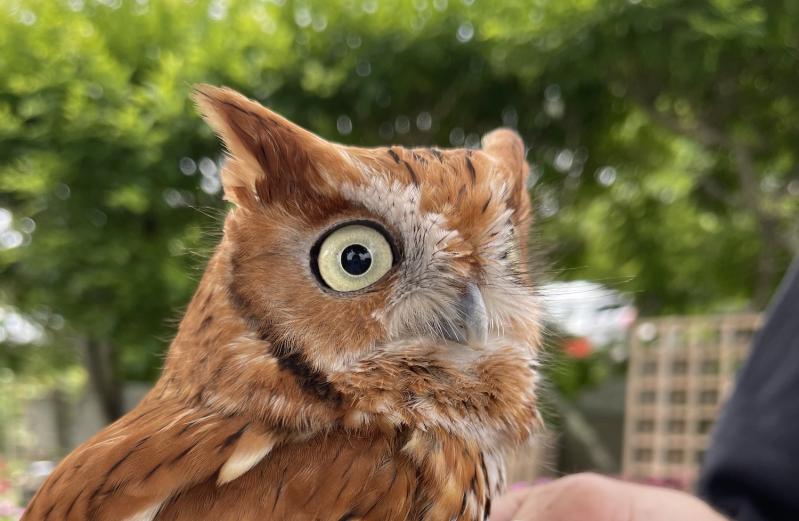 Screech owls fly low over roadways in winter and are often hit by cars, as this one was.
Keith Douglas
By Christopher Gangemi

In January, 20 years ago, in the middle of the night in Noyac, a horse, inexplicably and quite loudly, died in a tangle of mountain laurel behind my house.

The next day I scoured the property. No dead horse.

It kept happening. Each night, a horse died. A sad descending whinny marked its demise.

My wife and I were absolutely terrified, full of post-9/11 P.T.S.D. and fresh from the city. It’s funny now, in a perverse way, to reflect on my mind-set back then. No horse was being slaughtered. We were hearing an eastern screech owl, harmlessly alerting others to his presence, in a dead tree just off our driveway.

I don’t recall how we figured out it was an owl, but we must have asked someone. The “bird internet” wasn’t as advanced back then. Now, just google “sounds like a horse dying in my yard” and you’re linked to an article about disturbing noises animals make in the night.

Horse dying in your yard? Nope, says the internet. That’s just the “demented demon-whinny” of the eastern screech owl.

Meanwhile, in a separate article, “The Owl and the American Indian” by Eddie Wilson, the owl “as a creature of darkness . . . was to be regarded with mystery and awe.” And was “a prophet and factor in disease and death.” But it was also a “source of power, and a benefactor.”

Humans have been projecting onto owls for a long time.

The reason why we hear the screech owls in January is that the males are claiming and reclaiming territory, getting ready to breed. They are nonmigratory. They’ve been hanging out in the area, perhaps calling less when not setting up territory, and because of their excellent camouflage, are rarely seen. Most screech owls are bark-gray and blend in. The rest are a “red morph,” like the one in the photo.

What sounds like a creepy wobble to our ears is either a warning or an advertisement to owl ears. They’re either saying, “This is mine,” or, to quote the Beastie Boys, “Hey ladies!”

Wildlife is habitual. Owls will use the same tree cavity year after year. They also live a relatively long time, up to 20 years. The point is, if you’re lucky enough to hear a screech owl in your backyard, don’t remove that tree with the gaping cavity. If you absolutely must, then put up an owl box in December or early January well before they begin to nest. Young are raised in early spring.

One more note on screech owls that takes on extra local significance: Nests are almost always in deciduous trees. So, if your “revegetation” plan means you’re going to remove all of your old beech trees and put up a wall of cryptomeria on the property line, you may be adding to the problem of Hamptons “home insecurity.” Couple that with the “uplighting” trend, and local screech owls might have a harder time than ever.

It’s frankly too early to tell what effect all the landscape lighting installed in the last decade’s craze will mean for our local owls. The Suffolk County Legislature recently passed a new dark sky law that finds “excessive or unnecessary outdoor night lighting can have detrimental effects on the environment,” but doesn’t specifically mention owls. It also doesn’t apply to the many residents who light their trees all night.

I don’t think we need science to tell us that there are no shades to pull on a tree, or that nocturnal animals don’t benefit from flood lights. Awareness, empathy, and common sense will suffice. If you’re not around, please turn off your trees.

Remember, everything is habitat, including your backyard.

If you saw a screech owl, you might think it’s cute. It’s about the size of a brick, with big eyes, and ear tufts. But its howl represents pure death to a variety of critters. It apparently waits on a tree limb, like a spider in a web, for something to make the mistake of entering its lair. For the screech owl, the woods are its web.

Insects, mice, rats, songbirds, anything that is small enough and passes nearby is potentially in trouble. Nothing is safe, even other screech owls. They sometimes kill one another. Besides the cannibal adults, nestlings will commit “siblicide” to get food.

They even take bats on the wing. If you’ve seen a bat fly, you can imagine the skill required to take a bat in flight.

This adorable little owl is an efficient killer.

If it has a successful stint of hunting, it’ll cache its victims in tree holes for days, the way certain woodpeckers cache acorns. So, if you ever see a frog leg hanging out of a hole in a tree, blame a successful screech owl. Screech owls habitually throw up, once or even twice a day. Regurgitation allows them to discard the bits of their prey, like bones, fur, or feathers, that they cannot digest.

Perhaps it’s this raging attitude that has made them so successful. Conservation-wise, these birds seem stable, perhaps because of their generalist eating habits and ability to nest near humans. But they absolutely need trees with natural cavities (they don’t excavate) to live in and to hunt from. The stability, also, might just be relative to other bird species that are struggling even more.

John Bull, back in 1974, in “Birds of New York State” was worried, saying, “There is some evidence to suggest that screech owls are much less numerous than 20 years ago. In addition to increased road kills at night . . . there are fewer nest sites available. Orchard and shade trees are systematically pruned . . . and dead trees are removed.”

In a conversation this week, Jim Ash, former director of the South Fork Natural History Museum, had similar complaints. “Everyone sees a dead tree and they cut it down,” he said. “Habitat is getting covered up in tennis courts and driveways. You put it together, you have less birds.”

Recently, I found myself in a patch of East Hampton woods, skulking around in the darkness with friend and wildlife rescuer Keith Douglas. He unfortunately helps many screech owls that fly low over roadways and get hit by cars. According to the United States Fish and Wildlife Service, a recent study estimated “that between 89 million and 340 million die annually in vehicle collisions on U.S. roads.”

On this night, however, while we could hear cars whooshing half a mile away, we were just walking, being quiet, and listening.

“Did you hear that?” he said, whispering.

“I don’t know. Maybe my tinnitus.”

We were tripping over tree roots even though the moon was out, slightly protected by a gauzy veil of clouds. We came to a black skeleton of a tree, backlit perfectly by the moon. Black on deep blue. We just needed an owl to land in the tree to complete the scene.

The owl didn’t appear, or call. Around us, for miles, moonlit tennis courts, protected by walls of hedge, slept.