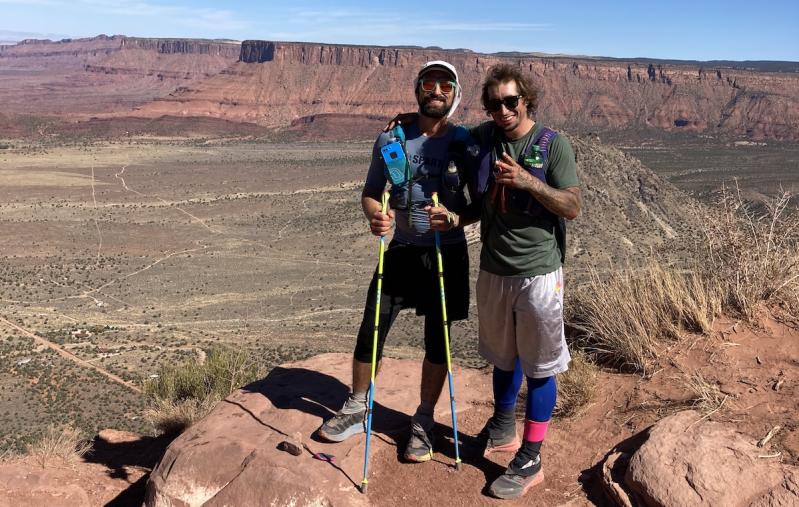 Anthony Daunt, at left, ran 240 miles and Richie, his brother, who paced him, ran 100 at the Moab 240 ultra race in Utah in October.
Anthony Daunt
By Jack Graves

Anthony Daunt, Groundworks Landscaping's general manager, barely got any sleep for four and a half days straight not long ago, but it wasn't his infant daughter, Mila, who was keeping him up, but rather the Moab 240, an ultra race in Utah.

Following the Iceland race, which confronted competitors with 25 demanding obstacles spread out along its 6.6-mile loops (most of which Daunt ran in the dark), he said it was probably the hardest thing he'd ever done in his life.

The 240 miles of running in Utah, which took him 107 hours over the course of the four and a half days, now tops that. "It was the hardest thing I've ever done," he said with certainty. "Utah was just about finishing."

He couldn't have done it, he added, were it not for his brother, Richie, who was his pacer.

Somehow he was able to drive to the airport the day after. It took him the better part of a month to recover entirely.

Next, Daunt, who lives in Springs with his wife, Erica, said he had signed up for the 500-mile Peak Bloodroot ultra that is to be contested in Pittsfield, Vt., in May -- a nine-day race that only four people had ever finished, he said -- but work demands have scratched that. That leaves the ultra world championships in Telluride, Colo., in October, which he plans to enter, though he might do a shorter one, a 100-miler, before that.

"I only ran 100 miles," he said with some modesty when questioned about his brother's feat, adding that as a pacer he got to sleep in a cabin, "while he had to sleep in the woods."

The pandemic had pretty much put Richie's professional boxing plans on hold, though Montauk Fresh Eats, which he runs with his girlfriend, Ashley Cassar, has kept him busy.

During the pandemic, he has continued to train, and to teach the sport at the Montauk Playhouse. He may, he said, compete in the national championships in Shreveport, La., at the end of the month.

Anthony Daunt has been sleeping through the night lately, as has Mila.