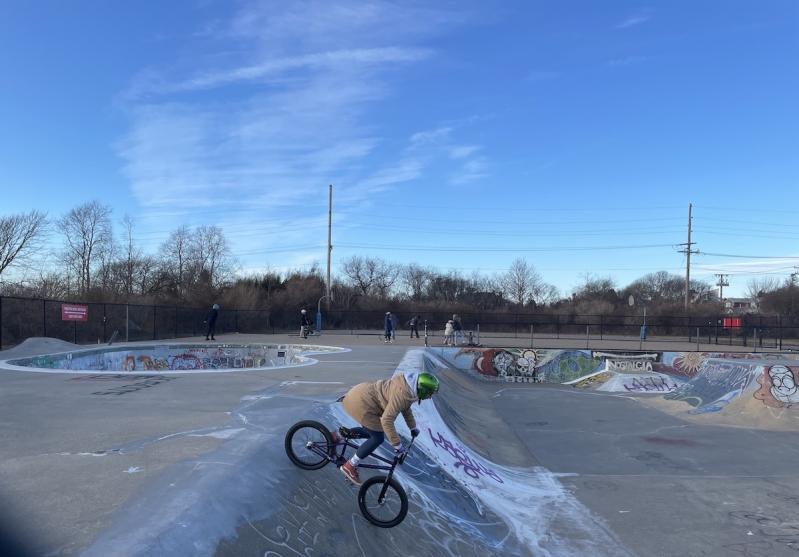 Having received the East Hampton Town Board's okay to apply for a $25,000 grant to renovate and expand the Montauk skate park, Councilman David Lys is expected to fully outline the proposed project's details at the board's next work session on Tuesday.

Expanding the park off Essex Street, which was designed by Andy Kessler, the late New York skateboarding legend, in 1999, has been talked about for the past decade, Lys said Sunday.

And now was the time to do it, especially given what he viewed as growing support here for the idea, and the public's increasing desire during the pandemic to exercise out of doors.

"As it is, the skate park can be a little bit difficult -- we want to make it accessible to all levels of ability, to all ages and socio-economic groups," the councilman said, adding that doing so could only serve to bolster Montauk's skateboarding-surfing connection.

Len Bernard, a former town councilman (and now town budget officer) who oversaw construction of Montauk's skate park, Tim Garneau, a town trustee and former Little League president, John Rooney, the town's parks and recreation director, and John Britton of Montauk are among those whom Lys has brought together to promote the project, whose costs he hopes can be underwritten by a public-private partnership.

"Skateboarding has advanced so much over the years," said Bernard. "It's a great project."

Kessler, he added, who died as the result of a wasp sting in Montauk in the summer of 2009, "was a great guy. . . . I remember when [former councilman] Pete Hammerle and I first met him at the Jitney stop in '98 or '99 he was wearing red Keds and a wool cap."

"The park is for boarders who are really better than expert," Garneau said in urging that it be updated.

Thanks in part to "a $50,000 donation from one donor," some of the money for renovation and expansion is in hand, said Councilman Lys, who, with Laura Weir, was to have sent the $25,000 grant application to the Skatepark Project in California earlier this week.

The Skatepark Project's website says in part that it has awarded $9 million toward creating 623 skate parks in all 50 states since Tony Hawk, an X Games gold medalist in 1995 and '97 and a 12-time world champion, launched its predecessor, the Tony Hawk Foundation, in 2002.

Further, the website says that "skate parks build and sustain healthy communities. . . . For many skateboarding youth, the skatepark becomes a home away from home."

"It's so free, rolling down the street . . . it's always a different experience," Kessler once said of skateboarding in New York City, a number of whose skate parks he designed, including the first one, in Riverside Park, which was renamed the Andy Kessler Skatepark last March. "Skateboarders all share in the common thrill, just rolling down the street. It's fun."

Spring Has Sprung at the L.V.I.S. Shops
An Online Auction for ARF
A Rescheduled Telephone Town Hall With Lee Zeldin
END_OF_DOCUMENT_TOKEN_TO_BE_REPLACED