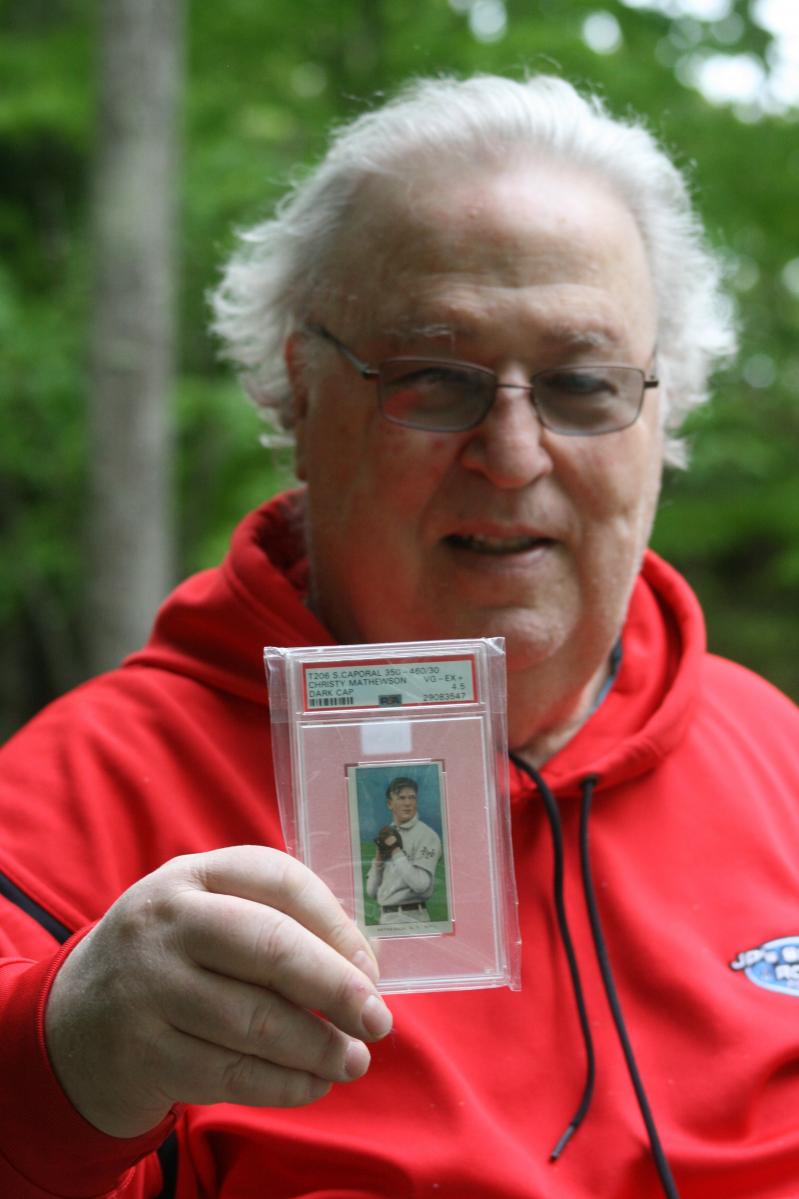 “Do you want to know what happened to the famous Honus Wagner card — and why I don’t have it?” John Goodman, who in his retirement has made a hobby of trading dead-ball era Major League Baseball cards, said during a socially distanced conversation this week.

“When they were first put out, in the early 1900s, tobacco company reps would go to spring training and offer players $50 to pose for them. Honus Wagner, the best shortstop of his time, was one of those who agreed, but when he found out he would, in effect, be endorsing tobacco products, he said no, and threatened to sue.”

“The company, I think it was Lorillard of North Carolina, pulled it very early in the run. Only 65 or 70 were ever made. Honus Wagner cards in mint condition used to fetch between $5,000 and $10,000. In 1989 or ’90 — this shows you how crazy card prices are now — Bruce McNall, a card and stamp collector who owned the Los Angeles Kings hockey team, and his star, Wayne Gretzky, bought a Honus Wagner card at auction for $490,000. You could look it up. . . . And that card not long ago sold at auction to an Arizona restaurateur for $4.8 million.”

When this writer told Goodman he used to flip (and thus ruin) baseball cards with abandon, and, moreover, had not a one left, the interviewee, who in 1981 coached the only East Hampton High School girls tennis team ever to win a county championship, said he had “flipped cards too, like crazy . . . leaners against the wall, faces and backs, long distance. . . .”

But there was a difference: Goodman, a lifelong Giants fan, had by the time he was 12 “six or seven boxes of untouched cards in gem condition in a closet.” The cards he flipped at school and summer camp were “doubles.”

“We lived in White Plains — I used to ride my bike two miles to the Gedney Way Deli every week on Fridays when a new shipment would come in to buy new packs, which were 5 cents a piece. There were 25 packs in a box, which came to $1.25. My weekly allowance was 75 cents, so I was always asking my parents if I could do odd jobs, cut the lawn or rake the leaves, so I would have enough to buy a box of 25 packs. Then, when I was 12, and instead of four of us there were five, we moved. My mother told me to get some string and scissors and tie up the boxes in groups of four and she would drive them over to the new house and put them in the attic.

Well, by this time, I’d discovered girls, and so, finally, she warned me that if I didn’t do what she’d asked ‘by Monday,’ they wouldn’t be there. I didn’t do it, and she tossed them. Yes, a lesson learned, and one that really hurt: That collection, which included all the Topps 1954 cards, conservatively, would be worth $500,000 today.”

A man named Jefferson Burdick had started it all, Goodman said, “a bachelor who collected every baseball card there was in the ’30s and ’40s, a collection that he donated to the New York Public Library, which agreed to take them if he mounted and cataloged them, which he did, using a Dewey Decimal-like system so that every card has a numerical identifier.”

“The cards I sell are mostly from the T206 set of tobacco cards from 1909 through 1911, one of three sets from that period, cards that picture in various poses players like Ty Cobb, Nap Lajoie, Cy Young, and Christy Mathewson. The T205s, T206s, and T207s are the early ones. The U.S. Caramel Company also put cards out. Its E90-1 set includes the Shoeless Joe Jackson rookie card, which, if it’s in fantastic condition, can go for $1 million. And no, I don’t have it. It’s been offered to me, but it wasn’t in good condition. . . . I have owned a mint John McGraw. It went for a lot, but I gave a lot for it.”

“Then there was the Goudey — pronounced Gowdy — Gum Company. The cards in those sets are more square — the older ones are rectangular — and there are four Babe Ruths and two Lou Gehrigs, among others, in that one.”

“Players from our generation can be found in the 1952 Topps set. Mickey Mantle’s rookie card is in that set, as are the rookie cards of Willie Mays and Eddie Mathews. A 1952 Mickey Mantle rookie card in top condition can sell for $1 million. If it’s in middling condition, it could sell for between $40,000 and $60,000. As I said, the prices are crazy.”

Cards were “graded,” he said, rated from 1 to 10 (“Pristine”) as to quality by such organizations as the PSA and SGC authentication services, “though the ratings aren’t necessarily definitive — people’s opinions also enter in. You and I might not agree as to a card’s condition.”

Traders also have to take possible counterfeiting and card-doctoring — recoloring, retrimming, and restiffening being some examples — into account, said Goodman, who later in life returned to collecting, and, ultimately, to buying and selling on eBay and, since the early 1990s, attending national conventions around the country. He was now pretty well known, he said, for his tobacco cards, which, once he buys and prices them, are warehoused.

In that connection, he heartily recommended that his interviewer read Lawrence Ritter’s “The Glory of Their Times,” a book of lively interviews with early-era players then in their 70s and 80s that was published in 1966.

“It’s a wonderful book — he spent four years tracking down players like Rube Marquard, Sam Crawford, Stanley Coveleski, Harry Hooper, Edd Roush, Goose Goslin, Paul Waner, and Hank Greenberg, who ended his playing career in 1947. . . . In one of those early World Series, which was a best-of-9 series, the Giants beat the Pirates 5-3, and all of those wins were shutouts. Christy Mathewson pitched three of them, Joe McGinnity one, and Rube Marquard one — three Hall of Fame pitchers.”

It was, he agreed, “a different game then,” what with fielders basically catching the ball bare-handed, wielding heavy bats with their hands apart, trying to see a ball coming at them blackened by tobacco juice and licorice — it was like hitting a squash, one of them, Rube Bressler, said — and with barely restrained fans breathing down their necks. And pitchers were expected to go all the way, which, in the case of one duel that involved Marquard and Babe Adams in 1914, meant 21 innings.

Goodman himself has met a lot of famous players at national card conventions over the years, Ernie Banks, Juan Marichal, Willie McCovey, Mariano Rivera, Doc Gooden, Tony Kubek, and Mike Schmidt among them. He had, he said, a lot of stories to tell about those encounters, stories that could wait, he agreed, for another day.

Spring Has Sprung at the L.V.I.S. Shops
An Online Auction for ARF
A Rescheduled Telephone Town Hall With Lee Zeldin
END_OF_DOCUMENT_TOKEN_TO_BE_REPLACED