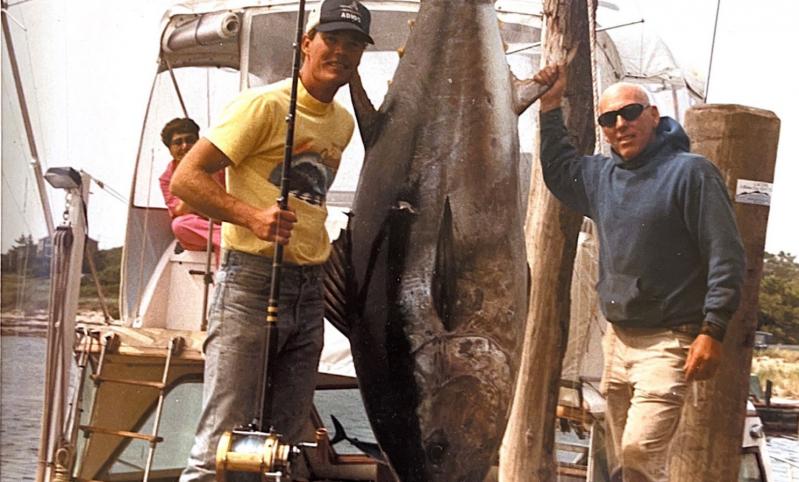 The stuff of legends: Capt. Skip Rudolph, left, and Capt. Phil Lewis showing off a 545-pound tuna caught aboard the Adios back in the day
By Jon M. Diat

This weekend over at Uihlein’s Marina on West Lake Drive in Montauk, the owner, Henry Uihlein, will once again host the popular Montauk Mercury Grand Slam Fishing Tournament in conjunction with the Kiwanis Club of East Hampton. It will be the 22nd year of the friendly inshore charity tourney that brings a large turnout of fishermen on the hunt, as well as spectators dockside to witness the weigh-ins of striped bass, bluefish, fluke, and sea bass. It’s a great time for all, whether on land or sea.

But the highlight of the event is the party and reception at the end of Sunday to celebrate the Montauk Fishing Legend of the Year. It’s a great moment to properly acknowledge a person from the hard-working fishing community.

On Sunday, the honor will be bestowed upon Capt. Skip Rudolph, the longtime skipper of the charter boat Adios.

“I’m so humbled by this,” said Rudolph. “I never would have expected this award. But I’m so truly thankful and grateful.”

“Without a doubt, Skip is one of the nicest people around the docks of Montauk,” said Uihlein. Rudolph’s peers on the waterfront voted for him and “He is so deserving of this award,” Uihlein added. “He has the respect and admiration of so many people.”

Rudolph is a third-generation fisherman and has made his living from the sea from the Gulf of Maine all the way to the Caribbean. But Montauk has been his home port for decades. Growing up on his father’s boat, he learned that people come out fishing for two reasons: to catch fish and to have a good time. It’s a mantra he’s followed throughout his career on the water.

Despite a current fight with cancer (which he is winning), Rudolph is usually out on the water seven days a week, always heading off with his typical great humor and an ever-present smile below his trademark mustache. His energy and warmth are contagious. As they commonly say of those held in high regard in Montauk, he is of the finest kind.

“Skip always has a smile on his face,” said Uihlein. “He is truly a remarkable person and a great fisherman too.”

As with previous award winners, the plaque Rudolph will receive on Sunday will be inscribed with the following: “In dedication for their knowledge of the sea, their love of the sport of fishing, and making Montauk the fishing capital of the world.” The words perfectly encapsulate who Rudolph is. Keep on smiling, Skip. We need you more than ever.

While the Uihlein’s tournament gets underway this Saturday, the Montauk Surfmasters Spring Striped Bass Tournament came to a close on Sunday. And the winner was not a surprise for those in the know.

If the name Brandon Sausele sounds familiar, you are correct. The 25-year-old surfcaster is a true master of his craft, and once again took first place with a 44-pound striped bass that he caught and released last week. Coming in second with a 40-pound fish was Jason Deland. Not a shabby fish by any means.

This marks the fifth time Sausele has captured the top prize, and his fourth win in the past five times the tournament has been held. Despite his young age, Sausele has an uncanny knowledge of where and when to seek large bass.

Sausele puts in serious time and effort, usually in the middle of the night when most of us are tucked snuggly in bed, in his pursuit of the famed linesider. Without a doubt he is the king of the surf.

“Brandon is really special and puts in many hours of the night fishing for bass,” said Paul Apostolides of Paulie’s Tackle Shop in downtown Montauk, the official weigh-in station for the tournament. “He may be young, but he is already one of the best around. Brandon is very driven and very competitive . . . and his effort really pays off.”

“One day I may burn out, but from May until November, I fish every night I can in Montauk,” said Sausele, who lives in Lake Grove, about 65 miles west of Montauk. Kudos to Sausele for another well-deserved win, as well as for his patience and perseverance in dealing with traffic to get to Montauk to fish. That in itself deserves special recognition.

Elsewhere, the fishing has started to settle into summer mode.

“The surf has been a bit quiet of late,” said Apostolides. “Even the bluefish on the north side have thinned out a bit.” He did confirm that the striped bass fishing for boaters remains excellent and that the fluke bite has perked up a bit in recent days.

While mako sharks can no longer be retained for the table, thresher sharks have been plentiful of late. Those who set up a chum slick hardly even have to venture more than three miles offshore to possibly land a whiptail. Captain Rudolph did such a thing on July 6 by hooking and releasing an estimated 400-pound thresher back into the wild. Nice going, Skip.

“Pretty typical summertime fishing,” said Ken Morse of Tight Lines Tackle in Sag Harbor. “Some porgies are around and there are weakfish in Noyac Bay, along with a few fluke here and there.”

Mashashimuet Park's History and Future
A Conference for Young People to Create Solutions
Get Outside, Get Moving
END_OF_DOCUMENT_TOKEN_TO_BE_REPLACED