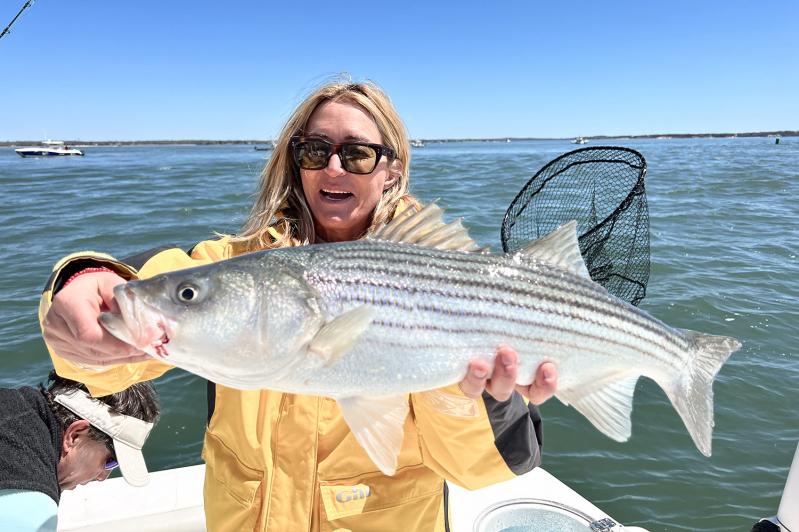 A few weeks ago, Sebastian Gorgone, the gregarious and always welcoming proprietor of Mrs. Sam’s Bait and Tackle in East Hampton, explained to me that the local fishing season will get in high gear only once the daffodils begin to wilt. I had not heard of this local proverb before, and I wondered, was it true?

On Saturday afternoon while I was visiting his shop, Gorgone revealed that it was he who had noticed, over years of experience, the parallel between daffodils and the arrival of fish in our local waters.

Sure enough, Gorgone’s prognostication proved to be on point. The ever-popular yellow flower has been on the wilt in recent days, and it has heralded the much-welcomed arrival of a plethora of fish for anglers to pursue, including striped bass, porgies, weakfish, and fluke.

Squid — a.k.a. calamari or bait, depending on whether you’re talking to a fisherman or a culinary type — have also begun to make their presence felt alongside various night-lit docks and piers. Their arrival signals that bluefish cannot be far behind. The toothy, omega oil-laden fish love cephalopods as much as humans do. By Monday morning, Capt. Harvey Bennett of Amagansett confirmed that bluefish had arrived on the scene, with the best fishing located near Accabonac.

Not to be outdone, early-arriving black sea bass have also been caught and released (they are out of season until the end of June), as have the ubiquitous sea robin, which can be retained in any size and quantity. On a side note, don’t underestimate the sweet, white flesh of the rather unsightly sea robin. Try it one day. You will be pleasantly surprised.

With the aquatic food chain now on full display, on Sunday morning at 6:30, I untied the dock lines of my boat for the first fishing trip of the season. Porgies were the primary target on our itinerary. But a few casts beforehand with a diamond jig in the rip that forms at the northernmost tip of Jessup’s Neck, which separates Noyac and Little Peconic Bay, was also in order.

With coffee in hand and a hot egg sandwich in my bag, I and two other guests loaded our gear aboard and headed westward to Jessup’s. It was finally time to catch some fish.

Arriving on the scene about 25 minutes later under a cloudless, early morning sky, we dropped our four-ounce diamond jigs into the 50-degree water, but our timing was off. The tide was nearly slack, and we hardly moved. Deciding it was not worth waiting another hour for the incoming tide, we motored southwest to anchor up for porgies.

It only took a few minutes for the bite to take hold. Over the next three hours, we managed a steady pick of mixed-size fish. A few weighed in around two pounds, but most were much smaller. The porgy fishing will continue to strengthen over the next few weeks. Still, it was a nice morning to be out and enjoy the perfect weather. There will be more such days to come.

Over at Tight Lines Tackle in Sag Harbor, Ken Morse, the longtime proprietor, also confirmed that porgies have settled in their usual springtime haunts, pleasing many anglers with a baited hook. “Plus the fishing for striped bass continues to be good whether in the inner bays or along the ocean beaches.”

Morse relayed that keeper-size bass were retained in Sag Harbor Cove for shoreside casters, and were making their presence felt in the outlying bays and harbors. Note that anglers can retain only one bass per day between 28 and 35 inches.

“Lots of nice fish are around for this time of the year,” he said. “And the action along the ocean beaches has been really good for small fish, but many large ones up to 40 pounds too are around, which is surprising. It’s a really great start to the season so far. It’s wonderful to see such activity.”

Out at Montauk, things are finally beginning to perk up. On Sunday, the opening day of fluke season, a fair number of keepers were landed in the still very chilly water. Like the wilting daffodils, it was a good sign.