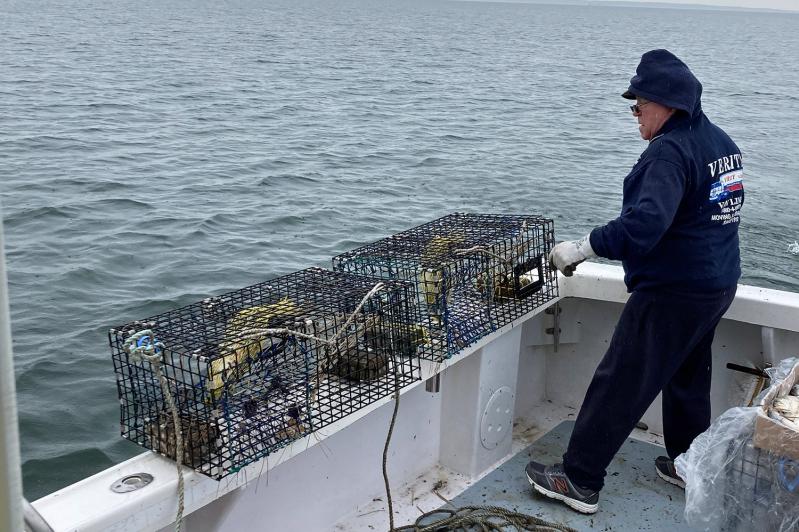 Ray Sperling helped bait and drop lobster traps into the water for the season.
Robert Cugini
By Jon M. Diat

Tuesday morning last week dawned dark and gloomy, with intermittent rain showers. Despite the forecast, there was also an unexpected gusty breeze coming from the northwest that blew across Sag Harbor Cove, where my boat is docked.

Getting out of my Jeep Wrangler in the gravel-strewn parking lot of Ship Ashore Marina, I held a simple paper cup of black coffee in my right hand and a 20-pound box of frozen bunker under my left arm. It was finally time to put the lobster traps in the water.

Walking down the elongated finger dock to where my boat was tied up, it felt good to head out on the water for the first time this year. It also brought about a severe sense of familiarity. It was a ritual I’ve performed hundreds of times before.

I had a bit of trepidation as I started the 370-horsepower diesel engine, however. After writing numerous checks this winter that amounted to nearly $30,000 for a multitude of repairs to my 20-year-old craft, I untied the dock lines. Would all of the repairs hold up? I held my breath.

The trip, on an average calm day, usually takes about an hour each way. Given the current astronomically high price of fuel, I was also not about to push my engine to an extreme speed. There was no need to go fast and consume the extra fuel.

“Make sure to check under the engine hatch halfway there to see if there are any leaks,” advised Rick Pickering, the longtime owner of the marina, in a text message he sent to me, referring to the engine that had been under his oversight this winter. Not exactly reassuring, but it was solid, practical advice to ensure all was well. Pickering, as well as his son Adrian, are engine gear-heads who really know their stuff.

“Your boatbuilder made you a great boat,” Adrian had said to me, smiling, as I loaded my lobster traps aboard my stern deck the previous week. “Everything broke down at the same time.” I guess that’s good news in some ways. My wallet, however, may differ.

A week earlier, the elder Pickering had also replaced the transmission cooler on my engine, after the boat was taken out for a trial run in the bay. It was the most recent surprise to be added to the extensive laundry list of work already done.

By now, I should probably just hand over my checkbook to the Pickering clan. Why take the risk of getting carpal tunnel syndrome by writing check after check?

Past the Sag Harbor Breakwater, I gently pushed the engine to a rather low 2,500 R.P.M., which equaled about 13 knots on the outgoing tide. Not exactly top speed at the Indianapolis Motor Speedway.

To my left, thankfully, sat Ray Sperling, a retired mechanic of incredible aptitude who worked for over 25 years at the Hampton Jitney. Given my well-known disposition as not mechanically inclined, I felt much better having him aboard if, or when, a breakdown should occur. Ray was my insurance policy.

Halfway to Gardiner’s Island, we agreed to take a peek below at the engine. “I don’t see anything wrong,” said Sperling, flashlight in hand, as he maneuvered his short-of-stature body in and around the cramped engine hold. “So far, so good.” It was welcome news.

Nearing our destination, we were greeted by about half a dozen seals, their bulbous heads bobbing up and down in the cat-paw-like waves. The seals seemed happy to see us as we began to bait our traps with bunker.

It took about 45 minutes to get all 15 traps into the 47-degree water, which was about four degrees warmer than it had been last year at this time, according to my logbook. Unlike the start of last season, it was also encouraging to note that there were no other traps in the water. I had my favorite area all to myself.

Depending on the weather, it would probably be around a week before we would return and see what we caught. Even better, the boat held up that day. No leaks of various fluids or issues of another kind were noted when we arrived back to port. It was good to be back on the water.

We all have heard of the Easter bunny, but what about Easter striped bass? If you ask Ken Morse, the owner of Tight Lines Tackle in Sag Harbor, he is a believer. “Just before Easter Sunday, the striped bass showed up in sizable quantities along the ocean shoreline. The fish are small in size, but the action has been good.” Small white bucktail jigs have been the ticket to success.

Farther to the west, there were additional glimmers of hope. “Things remain fairly quiet in our area,” reported Scott Jeffrey at East End Bait and Tackle in Hampton Bays. “Anglers are venturing out, but not much in the way of reports back to the shop. We are continually hearing of a large amount of bait, including spearing and bunker, in both Shinnecock and Peconic Bays.”

Jeffrey added that the Shinnecock Canal has been loaded with bunker on some days. “With the large amount of life around and the warming temperatures, it should be any day now that things pop. Last season, the weakfish showed up early, so be on the lookout for them. The bass and fluke should be in the canal any day now, and the blues should be a few weeks away, if that. So, I would conclude we have a lot to look forward to in the coming days.”