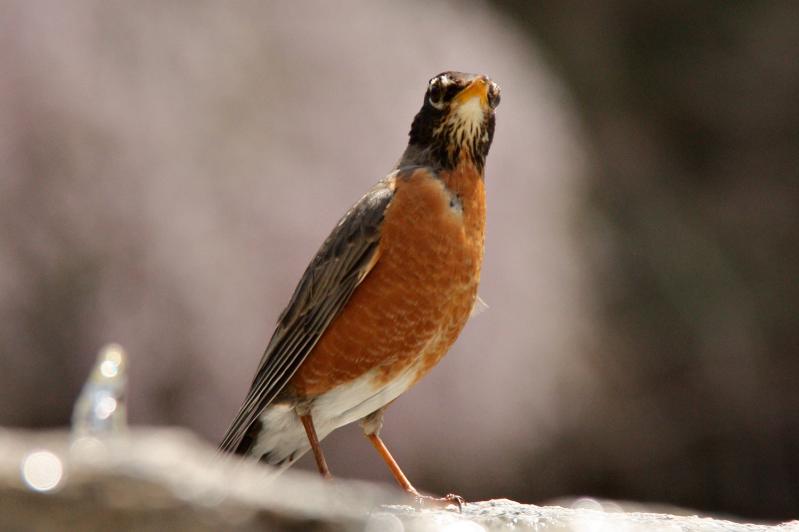 Robins are said to be able to hear earthworms moving underground.
Durell Godfrey
By Christopher Gangemi

Notice that American robin on your front lawn? It may look familiar, but it’s full of mystery.

It’s a bird we all know by sight, so ubiquitous that I won’t bother with a description. You attract them to your property almost without effort. Most often, we experience robins as they hunt on our lawns. They walk a few steps, stop, watch, listen, and then walk again.

They’re listening for earthworms. They hear them moving underground. Let that sink in for a second.

While I used to consider the robin a bird of the spring, I now understand it’s also a winter bird. While on the Orient Christmas count on North Haven last week, I found a new way to experience robins.

I was with a group of friends counting birds. They were behind me, obscured by autumn olive, which has been allowed to take over a field near Havens cemetery. When I emerged from the branches, I heard the familiar flight call of the robin, a buzzy, rising, “zeep!” I looked up and watched a couple dozen flying north. Noted. I walked out into the open field, hoping for something more interesting, I guess, and heard the call again. I looked up, a couple dozen more.

Over the next five minutes, I counted 150 robins. My team reported close to 500 for the day.

I started to wonder, which really is the best thing to do in most circumstances. It feels healthy to wonder. I wondered how they had found one another and I wondered where they were flying. I resolved to come back the following day at the same time.

I asked Andrew Farnsworth, a senior research analyst in the center for avian population studies at the Cornell Lab of Ornithology, what was going on. Where are these birds flying?

“American robins roost in large numbers during non-breeding periods, especially winter,” he explained over email. “The roost could be hundreds of meters or many kilometers from some preferred feeding location.” So, if I was watching these robins fly over the center of North Haven, perhaps they’re roosting on the north end of the peninsula, I thought, or maybe on Shelter Island.

The next night I moved about a mile north, to the South Ferry terminal. It was foggy. I stared up into a low white sky where robins would emerge from the south and then circle a moment above the shoreline, collect themselves, and then push across toward Smith Cove on Shelter Island. Despite the fog, I tallied 1,500.

Amazing. I’ve lived here for 20 years under the Great American Robin Flyway and I had no idea. I wondered what else I’d missed.

This bird, which I thought I knew so well that I had begun to ignore it, has a crazy secret life.

I became a little obsessed. When my family ceased to listen to me go on about “the mystery roost,” I started talking to anyone who would listen. “Can you believe it?” I asked some random woman as I picked up my morning coffee at Grindstone, “thousands of robins are roosting right across the water on Shelter Island.” She was polite, nodded, grabbed a napkin and took to Main Street. It’s so hard to puncture our modern consciousness, I thought, to crack the screen we’re all watching.

How do they collect? How do they find one another and know where to go? “It’s a good question,” said Mr. Farnsworth. “There is no doubt that acoustic communication coordinates some movements as does visual perception and observing where birds are moving in a particular area,” he said.

This helped explain their frequent flight calls, and how, when I watched them in the fog over the ferry, they often doubled back. I wondered if they could sense that they were about to push over water. Since they couldn’t see through the fog, their flight calls became even more important, allowing them to organize into a round.

They were like black stars shooting against a white sky. A stream funneling toward some nearby roost. At times, I’d take my binoculars down and look around, half expecting to see someone else as amazed as myself. Why am I the only one here?

The ferry droned just over my shoulder. A worker stared into his phone. Cars idled. A gull flew from a mooring pole.

In John Bull’s “Birds of New York State,” he noted as a high winter count, a round of 500 robins in Nassau County in 1968. I had just watched 10 times that number pass overhead in roughly 15 minutes. How?

Mr. Farnsworth said that robins are “perhaps the most poorly understood abundant species in North America. Different populations move to and from different areas at different times, occasionally intermixing and even leapfrogging over less migratory populations. And then there are effects of climate change, which certainly are happening in conjunction with changes in wintertime food availability,” he said.

American robins mix well with humans. They nest near our houses, are easy to see and appreciate, and don’t cause controversy by preventing people from driving on the beach. They like your lawn, but depending on how you treat it, it could be poisoning them. In fact, robins are so susceptible to pesticide poisoning that scientists use them as a useful indicator of chemical pollution. Think of them as the canary in the coal mine. Your lawn is the coal mine.

“Robins are poisoned primarily because of their earthworm diet,” according to a species account on the website, birdsoftheworld.org. While the pesticides we use now are nowhere near as lethal as DDT, when we use them we’re also killing beneficial insects, possibly even the earthworms on which robins rely. A diminishing or tainted food supply could make robins less successful when it comes time to reproduce.

Here are four ways you can help robins. First, use fewer pesticides. Second, plant native bushes that produce fruit, especially in the winter. Third, consider installing Acopian bird blinds (a great family project at birdsavers.com). Many robins die because they fly into windows. Finally, since they hunt near houses, robins often fall prey to outdoor cats. Consider transitioning your cat inside. At least during the breeding months, mid-March to July.

A week after I first discovered masses of robins flying over North Haven, I went to count them once more. Again, over 5,000 birds passed overhead.

I lost my desire to find out exactly where they were going. Like some song lyric you mishear, and prefer to the actual lyric, maybe it was better not to know. I decided to let the mystery persist. The robins are sleeping by the thousands on Shelter Island, and I don’t need to know where. Knowing that they’re there is enough.

Do they close their eyes? What does it sound like in the middle of that roost?

I don’t mind being left to wonder.

Seeing more robins than you used to? I’m interested in your bird sightings, common and uncommon. Strange stories, normal stories. If they relate to birds, their behavior, or awareness in general, please drop me a line at [email protected]. “On the Wing” is published weekly.

Hoedown on the Farm, Cocktails in the Garden
Main Beach Free Concerts in Final Weeks
Services and Counseling After Death of Popular Teacher Assistant
END_OF_DOCUMENT_TOKEN_TO_BE_REPLACED