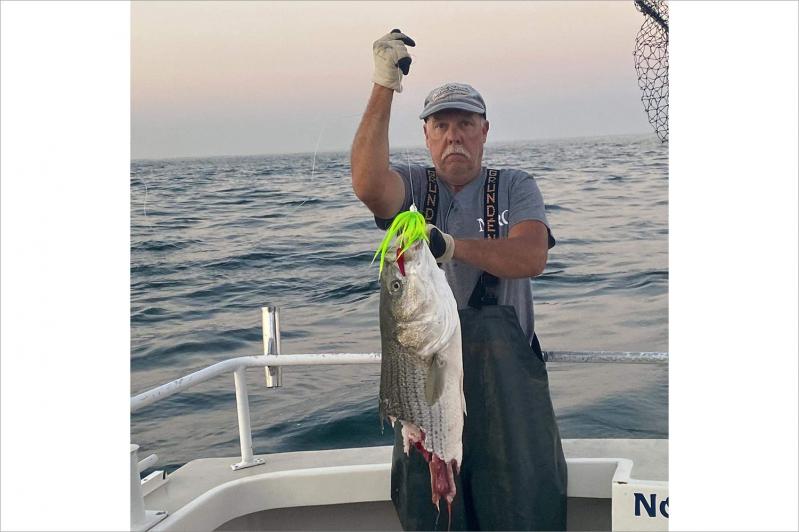 Bill Witter of the Montauk charter boat November Rain held up a striped bass that was bitten in half by a shark on a recent trip.
Capt. Steve Ruiz
By Jon M. Diat

The horrific tragedy that befell the open boat named the Pelican II, which took place 70 years ago this weekend, still resonates with many here who have firm roots in Montauk and beyond.

As the story goes, Sept. 1, 1951, was a bright and sunny morning -- the start of Labor Day weekend -- as Capt. Eddie Carroll untied his dock lines and set sail from the Fishangri-la dock in Fort Pond Bay on the 42-foot open boat he captained, with 62 fares aboard. The array of piers on the southeast corner of Fort Pond Bay were the early home of the multitude of party and charter boats before Lake Montauk was opened to Block Island Sound two years later.

Sadly, Carroll and 44 of his passengers would never return. They were lost to the sea in a sudden, violent squall that moved in quickly around noon near the Frisbee grounds, a scant few miles southeast of the Montauk Lighthouse. The Pelican foundered and ultimately capsized less than a mile north of the Lighthouse.

At 14 gross tons, the Pelican was not subject to Coast Guard regulations and an annual inspection, which at the time were required only of vessels of more than 15 gross tons. Some would say an extra ton may have prevented the accident.

The story of the Pelican is retold in intense detail by Tom Clavin in his book "Dark Noon." It captures the story of the ill-fated voyage of the vessel and its fares, as it battled the sudden, growing northeast winds and building seas coming off Block Island Sound, its crew trying in vain to return safely to port.

It's a heartbreaking story on all accounts. In my youth, I fished for fluke with Eddie's brother, Howie, several times on the Jigger II, a 65-foot open boat he captained. I never asked him about the Pelican nor about his brother. I was too young to fully grasp the magnitude of the tragedy. Looking back, I'm quite sure he would not have wanted to elaborate on the events of that fateful day.

"The story of the Pelican was a horrific tragedy," recalled Harvey Bennett of the Tackle Shop in Amagansett, whose family has fished on the East End for several centuries. "Eddie was a very experienced captain who knew the waters very well. He died trying to save those who were thrown into the water. I pray we never see such an event again. God rest their souls."

No doubt many will fish and enjoy the waters this holiday weekend. It's a time to relish the late stage of summer, but also an appropriate moment to pay homage to those who perished that day 70 years ago. It was indeed a dark noon that should never be forgotten.

On the local fishing scene, it's game on for a multitude of species, both inshore and offshore. The catches were good by all accounts.

"The action has been very good of late," said Dave Reutershan over at Westlake Marina in Montauk. "But I've never seen so many striped bass eaten in half." The culprits in Reutershan's story were the sharks that have been feasting on striped bass as hopeful anglers are in the process of reeling them in off Montauk Point. "They are having a nice snack for sure."

As for other species, Reutershan described the fluke action as "picky," while those on the hunt for black sea bass have had much better success. Note that the retention limit for sea bass increased to seven fish per person yesterday.

Farther offshore, Reutershan said that blue water anglers fishing off the far-off canyons have done exceedingly well with bigeye and yellowfin tuna. Mixed in are mahimahi and swordfish. Closer to home, yellowfins have kept those with a hook and line content. "The center-console guys have also caught well closer to shore," he said of anglers in smaller vessels venturing 15 to 20 miles offshore.

"Porgies and blowfish can still be had in Three Mile Harbor," said Sebastian Gorgone at Mrs. Sam's Bait and Tackle in East Hampton, and there are "lots of big hickory shad and small bluefish" for the taking at the ocean beaches.

Over at Tight Lines Tackle in Sag Harbor, Ken Morse lamented over the news of a massive die-off of peanut-size bunker in local waters. "There have been trillions of fish killed off all the way from North Sea to Noyac Bay and over to Cedar Point. . . . It's terrible news to hear." The New York State Department of Environmental Conservation has been called in to examine the issue.

Morse also said that there has been a dearth of snappers (small bluefish) this summer. "So many people have come into my shop asking where they are. I don't have an answer for them."

On the positive side, Morse said that fluke fishing has picked up, along with catches of weakfish in Noyac Bay, and even inside Sag Harbor Cove at night. "The kids are having a ball catching them off the docks under the lights here in town. They are very plentiful."