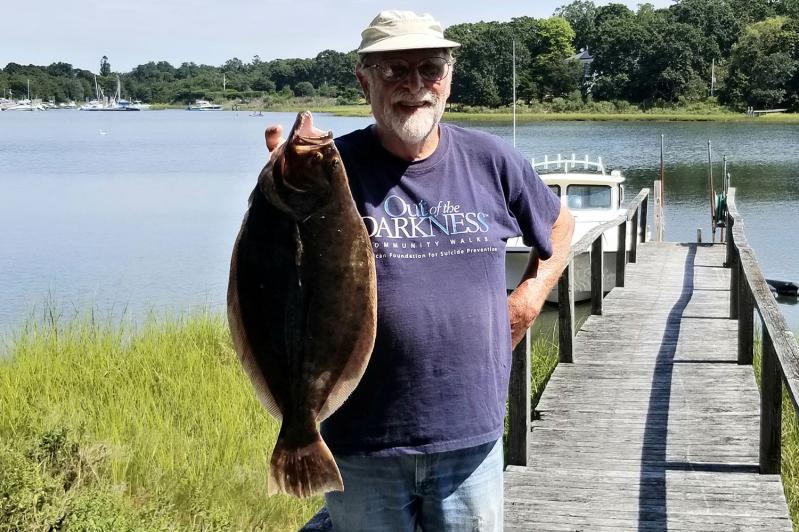 William Feigelman of East Hampton caught this 10-pound fluke on a recent trip on his boat off Eastern Plains Point.
By Jon M. Diat

As a creature of habit, I like to plan ahead. Sure, there are moments in which I engage in bouts of spontaneity, but for the most part, I'm very regimented in my daily schedule and what needs I should address. That attribute, for better or worse, crosses over to this very column, which I submit faithfully to my editor every Monday morning.

This week, I had a particular story in mind. On Saturday, I entered the clam shucking contest at HarborFest in Sag Harbor. It's not exactly an Olympic sport, but it's a fun and engaging event that has gone on for decades. I've opened clams for most of my life, and I thought the time was right to see how I shaped up against the competition.

The popular maritime festival, co-founded in 1964 by the Sag Harbor resident and Nobel Prize recipient John Steinbeck (it was called the Old Whalers Festival back then), was canceled last year because of Covid, but this year it was game on, so to speak.

As such, I thought I would be interesting to chronicle my travails in the eternal battle of man versus clam (I'm not aware of Steinbeck ever writing about the mollusk in question). I had selected my clam knife, one of several in my possession, a trusty wood-handled specimen that was well over 50 years old. Best to stick to the tried and true, I thought.

I was ready to shuck.

I would have loved to have extolled how well, or poorly, I did on historic Long Wharf, where the contest was held, but alas, it was not to be.

At precisely 12:25 a.m. -- a little more than 12 hours before the contest -- I was stricken with intense pain in my lower left abdomen while in a deep sleep. Unfortunately, it was a discomfort that I have become too familiar with.

Medical professionals, and those who have suffered from them, proclaim that kidney stones are the equivalent to childbirth or getting stabbed with a knife. Thankfully, I have experienced neither of the latter. Still, the pain was paralyzing.

My clam knife was solemnly returned to the kitchen drawer, and I traded the clam contest for a trip to the Stony Brook Southampton Hospital emergency room.

A shot of morphine killed the pain for a while, and a few hours later, I was released from my gurney with a handful of pain killers and a reminder to drink plenty of water. Guidance I know all too well from my previous episodes of dealing with stones. As the old saying goes, this, too, shall pass. The clams will have to wait until next year.

For those more able-bodied than I at the moment, the fishing scene remains solid in many locations.

"There are still plenty of weakfish in Noyac Bay, while porgy fishing is good in many of the usual local spots," said Ken Morse at Tight Lines Tackle in Sag Harbor. Morse added that bluefish are thick at Jessup's Neck, with diamond jigs being the lure of choice. A harbinger of fall, a few small striped bass have also mixed in of late.

"False albacore and bluefish are scattered around Block Island Sound," reported Harvey Bennett at the Tackle Shop in Amagansett. "Porgies and blowfish are biting well in Three Mile Harbor, as well as at the Navy dock in Fort Pond Bay."

He added that snapper fishing has been good from various piers and bulkheads, and that blue-claw crabs remain on the prowl in the deeper recesses of many local coves and harbors.

As a reminder, Bennett's end of summer sale on all things tackle, as well as R.A. Ribb clam rakes (considered by many to be of the finest kind), continues at his shop.

Over at Paulie's Bait and Tackle in downtown Montauk, the owner, Paul Apostolides, said that surfcasting for bass and blues was excellent on the north side. Larry, a powerful offshore storm, began to pound the south-facing shores over the weekend. "The fishing was really good before the swells kicked up, but it should settle back soon." The veteran tackle dealer did note that a nice catch of striped bass was taken on the south-side beaches on Sunday morning. A good omen for the beginnings of a fall run, he hoped.

"And I was pleased to see that snappers finally showed up a few days ago locally," he said, referring to small bluefish, a fish that appeals to those of any age -- young or old. "It's been a few years since we've seen them in any quantity."

Want to lend a helping hand to clean up the beaches? On Saturday at 9 a.m., the Montauk Surfcasters Association, in conjunction with New York State Parks, will join in International Coastal Cleanup Day at Montauk State Park. Volunteers are asked to meet at the lower parking lot at the Point. Garbage bags and good camaraderie will be provided.