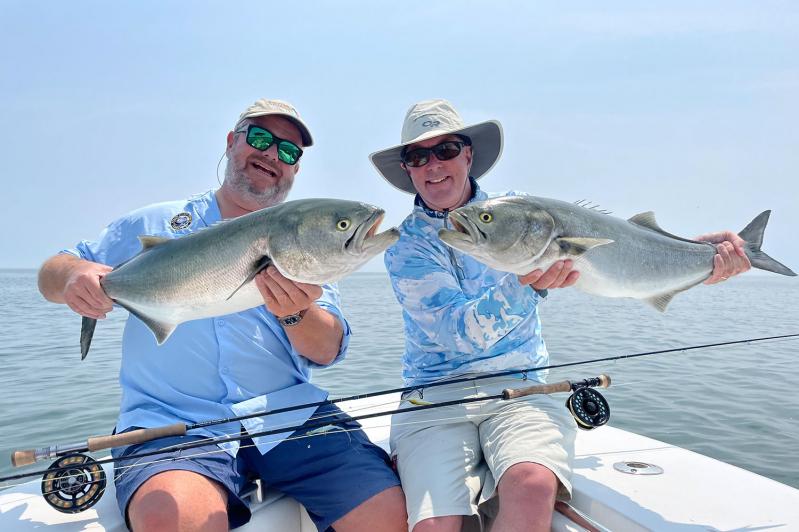 Robert Ford and Ed Shugrue caught and released these large bluefish off Montauk on a recent trip with To the Point Charters.
Capt. Paul Dixon
By Jon M. Diat

Being stranded on the water is no fun, but mechanical breakdowns happen to just about every power boat owner at some point, so it's always good to be prepared.

Thankfully, I've had to be towed only in once in my life. It happened about 15 years ago when I broke down about two miles south of Orient Point in Gardiner's Bay. I was returning to port after checking my lobster traps off to the east.

With a call over the VHF radio on channel 16 to Sea Tow, the 24/7 marine towing service came to my aid in less than 20 minutes. I can no longer remember the captain's name, but I do recall that he was a former lobsterman from Port Jefferson, who unfortunately had to quit the business due to poor catches. Fetching boaters in minor distress became his livelihood instead.

"You gave me excellent coordinates," I remember him saying as he affixed a rope to the bow of my boat. "You wouldn't believe how many people have no clue where they are when they call for assistance."

After he towed my boat back to its slip in Sag Harbor, I tipped him generously and gave him a few lobsters from my hold. If I hadn't had a Sea Tow membership, the over-an-hour tow would have cost about $1,200, he said. Ouch.

Living here on North Haven for the past 60 years, I have an excellent view of Shelter Island Sound from my back patio. Besides taking in the beautiful vista of the Mashomack Preserve a mile away on Shelter Island, I also have the benefit of witnessing a wide assortment of motorboats and sailboats in all shapes and sizes, a fair share of them, especially in summer, being towed by one of the commercial towing services or by a private vessel.

Last Friday afternoon alone, I saw about four boats under tow, including a 38-foot Scarab speed boat that had four 400-horsepower Mercury outboard engines. With Jeff Bezos and Richard Branson in mind, such extreme power seemed a more suitable way to gain entry to outer space than to flying about in a sheltered bay, but to each his own.

I'm not sure what the problem was with the Scarab, but the five-person, mostly bikini-clad crew seemed unbothered by the situation, as their stereo was at full blast while cold beers were passed about the stern. They were having a marvelous time while under tow, breakdown be dammed.

I bet the captains of these tow boats have plenty of good stories to share. A reality TV show is certainly a possibility given the plethora of such genres.

For those mariners who experienced no such breakdowns, the fishing scene remained in high gear last week.

"I'm not sure where to begin," said Harvey Bennett at the Tackle Shop in Amagansett, while trying to list the many different species of fish that now abound locally. "Porgy fishing is outstanding and a lot of sea bass are mixing in." Bennett said that the dock at Eddy Ecker County Park on Fort Pond Bay has been a hot spot for those focused on scup. "Plenty of bass along the ocean beaches and blowfish and small snappers [baby bluefish] are in Three Mile Harbor now."

Speaking of snappers, snapper popper lures are now a hard-to-find commodity. "I was lucky enough to get the last 152 from my supplier," said Bennett. "I'm now getting calls from tackle shops as far away as Connecticut trying to get some." Covid continues to disrupt the supply chain, as a vast majority of terminal tackle is manufactured in Asia. Blowfish rigs are another item in short supply.

Bennett added that crabbing remains just fine in local bays and coves, and that carp are hungry for dough balls at Hook Pond. "There are some mighty big carp around," he said. "They are fun for catch-and-release action."

"Typical summertime action," said Ken Morse at Tight Lines Tackle in Sag Harbor. "Small weakfish are at buoy 16 in Noyac Bay, while bluefish are at Jessup's Neck. Porgies, too, are just about everywhere."

While striped bass, bluefish, porgies, and sea bass remain in good supply at Montauk, the action for fluke has improved in the past week or so.

"The fishing has picked up nicely," confirmed Kathy Vegessi, the shore-side support arm of the Lazybones, a half-day open boat out of Montauk that is popular with families. Vegessi said that on Saturday the youngsters put their parents to shame with an excellent haul. "The kids were hot that day and caught pretty much all of the keepers. It was great to see."

Finally, La Fin restaurant in Montauk Harbor will host a benefit for Capt. Skip Rudolph of the charter boat Adios, who is battling some medical issues. The event will take place on Tuesday at 6:30 p.m., with live music, raffles, and a 50/50 drawing. A GoFundMe page can be found by searching "Skip Rudolph Fundraiser." It promises to be a great event for the popular captain with an ever-present smile.