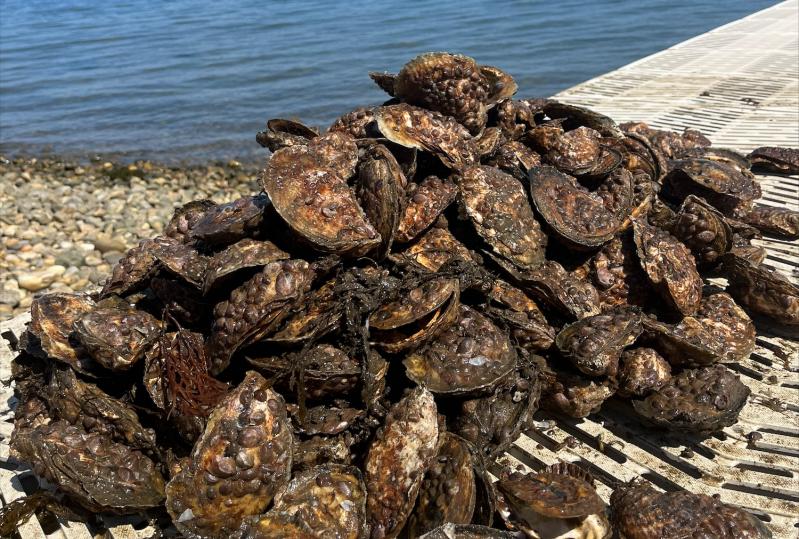 In my column last week, I highlighted that I had recently hauled out my lobster and crab traps for the season. However, I neglected to note that my two oyster cages, which together hold about 1,000 of the salty and sweet specimens, are still in the water. They will remain there through the upcoming winter months.

This year, due to a multitude of issues and commitments to attend ashore, I’ve paid little attention to the two lantern-style cages that hang at the end of my next-door neighbor’s dock. In short, the oysters were off my radar. Additionally, for the first time in years, I decided to skip my allotment of juvenile spat this spring from the Cornell Cooperative Extension program over in Southold. I had some intention to do it, but I never caught my breath.

While I did relocate the previous spring’s oysters into new cages back in April, I had not bothered to check on their status until last Wednesday afternoon, Sept. 21. I walked out to the end of the dock, unsure of how well they had survived the warm summer water. Did they die off? Did they survive and thrive?

The oysters I received 16 months ago, which barely filled a half-pint container at that point, had grown to over five inches in length in many cases. Their growth was amazing. After cleaning, culling, and sorting, I had well over a bushel basket of tasty bivalves.

Unlike the unfortunate demise of the bay scallop during the summer, it was clear the oysters were as happy as a clam. They are hardy creatures for sure.

I took two full buckets of the largest ones back to my boat slip in Sag Harbor Cove, where I put them into a floating holding cage. This will make it easier to pluck out as many as I want to consume over the next six months. The remaining oysters, mainly smaller ones, went into a new lantern cage at the dock. I’ll check on them again come spring.

Meanwhile, on the local fishing scene, some gusty winds and large-period swells from powerful Hurricane Fiona, which ultimately pounded the Canadian Maritimes, put a damper on fishing in many cases.

“It really was an unremarkable week,” confirmed David Reutershan over at Westlake Marina in Montauk on Sunday afternoon. “There was really very little to report. Nobody was able to get offshore to fish for tuna as the waters were churned up everywhere.”

“Sea bass were pretty much the saving grace,” he added. “But even then, you had to weed through a bunch of shorts before getting a keeper bass.” Note that anglers can retain six sea bass over 16 inches in length per day.

For those who know where to go, blowfish — large specimens, too — are still taking hooks baited with clam or squid.

“I took my grandson Brody [Mannino] out the other day on the boat, and we caught seven huge blowfish,” Brian Corbett of Shelter Island said when I bumped into him on Front Street with his family at the Greenport Maritime Festival on Saturday afternoon. “I cooked them up for dinner that night and he ate three of them. He never had blowfish before.”

According to Corbett, Brody, 6, proclaimed afterward that he loves to eat blowfish “‘and can’t wait to go out again.’ He was all smiles.”

I know what you mean, Brody.

As a reminder, the Montauk Surf Fishing Classic tournament for striped bass and bluefish starts tomorrow. Fishing kicks off at noon and continues through Sunday. The first 100 attendees at Sunday’s awards ceremony, at the Lighthouse at 12:30 p.m., will receive a goodie bag and a free raffle ticket.

Weigh-in and registration for the contest is at Paulie’s Tackle Shop in downtown Montauk, and the entry fee is just $20.

In addition, the Montauk SurfMasters Fall Classic is underway. There have been no weigh-ins as of yet, but it’s a fair bet that Brandon Sausele will put one on the leaderboard shortly. Sausele, who is one of the top surfcasters around these parts, captured the title in the spring event, as well as last fall (and others). A true sharpie, he is.

To enter the catch-and-release tournament, participants can fill out an application at Paulie’s Tackle or go to montauksurfmasters.com