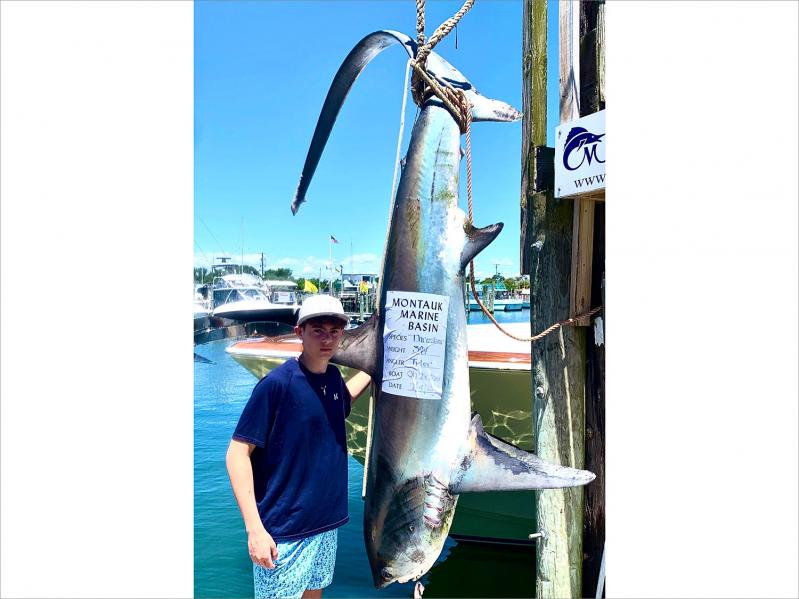 Tyler Ferdinand, 15, landed this 394-pound thresher shark on a recent trip aboard the Oh Brother! out of Montauk. 
Capt. Rob Aaronson
By Jon M. Diat

On Sunday morning, I checked my lobster traps before doing a bit of fluke fishing at nearby Gardiner's Island (we only caught a few short fluke by the way). Unfortunately, my catch of the tasty crustaceans has also been on the slow side since dunking my traps into the water back in late March. It's been that way the past two years for that matter.

Two weeks ago, I came up with four lobsters, my poorest catch of the season. But on Sunday, 14 had entered my traps, a significant improvement. Not surprisingly, most were new-shelled lobsters, meaning that they had shed their exoskeletons over the past few weeks.

Lobsters grow by molting. It's basically a process in which they struggle out of their old shells while simultaneously absorbing water which expands their body size. Once shedding their old shell, lobsters put on the feed bag in a big way.

Such expansion of their size kind of reminds me of going from 36-inch blue jeans into a roomier 38 to adjust for my growing waistline. But unlike a lobster, I can at least go on a diet and try to squeeze back into those old Levi's in my dresser drawer.

Marine scientists estimate that molting occurs about 25 times in the first five to seven years of a lobster's life. Following this cycle, the lobster will weigh approximately one pound (about the smallest of a keeper-size specimen). After that, a lobster may only molt once per year for males or once every two years for females.

At this point in its life, with each molt the lobster will increase about 15 percent in length and 40 percent in weight. As well, the older a lobster gets the longer the period of time between shedding -- usually occurring once every three or four years.

While my last catch was encouraging, it was probably a bit of an aberration. Those numbers are just not sustainable in the area where I trap. Frankly, I continue to have better success this summer with the two crab traps I bait near my boat in Sag Harbor.

While picking apart a blue-claw crab is a more laborious task, the meat is more delicate and sweeter than that of lobster. Still, lobster remains king around these parts and that will likely never change. Just about every restaurant offers its own version of a lobster roll and that's just fine. The demand is there, and it's a perfect summertime treat for many, one that I still enjoy.

While my fishing outing at Gardiner's Island was fruitless, others thankfully have had better success than this scribe.

"We've had some super fluke fishing of late," remarked Capt. Mark Ryckman of the Montauk Star, a full-day party boat that sails every morning at 6 a.m. from Star Island Marina in Montauk. "On Saturday, many fares had multiple limits with fish up to 10 pounds. Sunday was equally successful. It was as good as it gets."

Note that anglers are allowed to retain four fluke over 18.5 inches per day. "Get them now, because you can't catch them from home," cautioned Ryckman.

Capt. Hugh Chancey of Chancey Charters also put his fares onto a hot fluke bite, with one flattie nearly reaching 14 pounds among some other fine fluke over the weekend. Even with more boat traffic, the striped bass fishing off of Montauk also continues its strong run, Chancey added.

Holy mackerel! While it's a widely used quote that describes an exclamation of astonishment, I'm not clear on the origin of the phrase. But fares of Capt. Steven Forsberg Sr. of the Viking Starship found the motherload of the tasty oily-fleshed fish on Saturday afternoon.

"The mackerel moved in heavy," he observed. "We probably had about 250 fish and we saw them on every drop, along with sea bass and porgies. it was a lot of fun."

Farther offshore, bluefin, and yellowfin tuna are roaming around the Butterfish Hole and nearby environs in decent quantities, while bigeye tuna, mahimahi, and swordfish have made their presence felt farther out. Want some codfish? They too, have been taken south and east of Block Island of late.

Farther to the west, Sebastian Gorgone over at Mrs. Sam's Bait and Tackle in East Hampton also extolled the good fishing in his area. "Porgies are around in most places and blowfish are in Three Mile Harbor too."

"And don't forget blue-claw crabs," he added. "They are crawling about in most harbors and creeks. Nothing better than fresh crab to enjoy."

I can attest to that

Mashashimuet Park's History and Future
A Conference for Young People to Create Solutions
Get Outside, Get Moving
END_OF_DOCUMENT_TOKEN_TO_BE_REPLACED