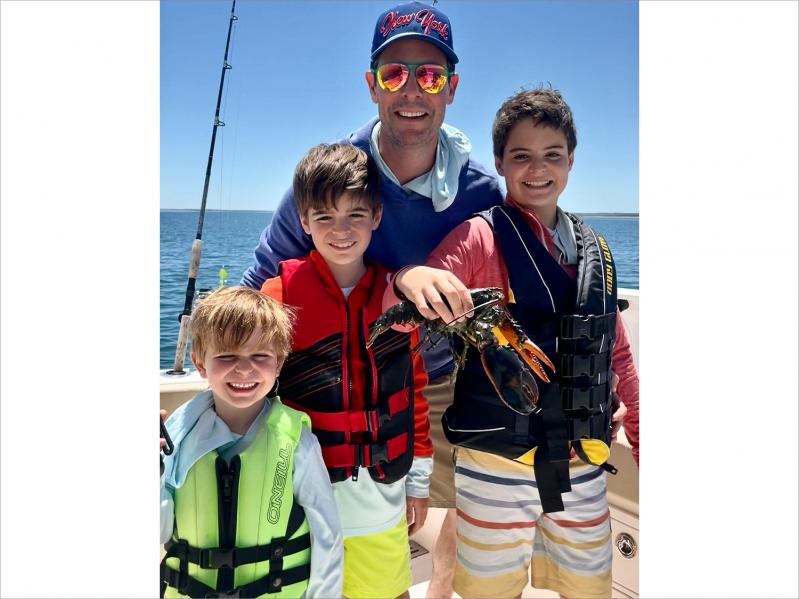 The Beshara family of Amagansett have enjoyed their catches of lobster this season from their boat. 
Virginia Rollina
By Jon M. Diat

For the past few years, bunker, also known as menhaden or pogies, have infiltrated local waters in numbers not seen in nearly 50 years. Massive schools of the oil-laden fish have been seen en masse in the bays and inner estuaries, as well as floating about the surface just off our ocean beaches. Their biomass has exploded.

As such, whales and porpoises have been on an aggressive feed as bunker are one of their favorite treats to eat. Bathers along the ocean shoreline have also visually enjoyed the nearby Sea World-like show, while munching on lunch above the high-tide line the past few summers.

But this year, at least so far, Mother Nature has served up a curveball. While the bunker showed up on schedule in good quantities in various bays in early April, they dispersed rather quickly to parts unknown before many who tend to pound traps were fishing.

In addition, several operators of such traps decided not to erect them this season while seeking greater fortune on land or concentrating on more financially beneficial fisheries. For the record, the price paid for bunker (which are rarely, if ever, used as table fare) is sometimes only pennies on the dollar.

You need to trap a great number of them (they rarely grow more than 12 inches) in order to make a decent profit. It’s heavy and laborious work, too.

Jeff Batky of Sag Harbor, who fishes two traps near Barcelona Neck at the southern end of Northwest Harbor, did not put his traps in this spring. The same was the case for the longtime bayman Jon Semlear of Noyac. For decades Semlear fished several traps in and around Jessup’s Neck, a few miles to the west of Batky’s set.

Both commercial baymen were also longtime suppliers of bunker to wholesale bait dealers on Long Island, who would then resell that catch whole or ground into chum to storefronts for fishermen who use it to entice a multitude of species including striped bass, bluefish, sharks, tuna, and even blue-claw crabs.

Compounding the bunker conundrum, commercial lobstermen to the north, especially in Maine, have seen an acute shortage of bait to attract lobsters to their wire traps. Herring was the universal choice of lobstermen for well over a century, but due to a lack of supply as a result of strict quotas of the overfished herring, many have now turned to bunker as their bait of choice, and bunker are also far less common in those northern waters.

As such, the lust for bunker is intense. It’s a classic example of the economic theory of supply and demand.

“Getting bunker has been a real challenge,” agreed Ken Morse at Tight Lines Tackle in Sag Harbor. “I could not get any last weekend, and I was only able to get two flats on Saturday from my wholesaler. The bunker I received came all the way from Cape May in New Jersey. I’ve never received bunker from such a long distance before.”

Over at Mrs. Sam’s Bait and Tackle in East Hampton, the owner, Sebastian Gorgone, echoed Morse’s lament. Gorgone said that a 25-pound box of bunker is now $25 from his wholesaler. “It’s almost doubled in price.” Ouch!

As someone who traps for lobster and uses bunker for bait, I too have felt the pinch to my pocket.

Talking about the local fishing scene, Gorgone said that Cedar Point has been a popular location of late for porgies and weakfish. “Very nice action over there,” he said. “Three Mile Harbor is still loaded with striped bass and more blowfish are showing there too.” He added that bluefish continue to show up along the length of Gerard Drive.

Out at Montauk, the striped bass and bluefish bite remains awesome with a multitude of bass over 50 pounds still being caught and released.

Capt. David Blinken of North Flats Guiding in East Hampton, a light-tackle guide, said that the skinny-water fishing for striped bass from Noyac Bay to Montauk has been good. “It’s been a solid season so far,” said Blinken, who is also a moderator of the Masters of the Fly podcast, which features instructions for those who seek fish by utilizing fly-fishing equipment and light-tackle gear. “Out at Montauk, the bite has been exceptional. While no bunker are around, there has been a fantastic run of squid which has kept the bass in place.”

As for fluke, the action has perked up in recent days, to the gratitude of many.

“The fluke fishing has really turned on, and we’ve had some solid fishing of late,” confirmed Capt. Mark Ryckman of the Montauk Star, a full-day party boat out of the Star Island Marina. “It’s nice to see a great improvement in the action. It’s getting better every day.”

On Saturday, one of Ryckman’s fares decked a 12–pounder, one of the largest weighed in Montauk this season. On Sunday, his patrons reeled in over 65 keepers, making for another great day.

Finally, a special shoutout goes out to the three Beshara brothers of Amagansett — Brooks, 10, Zander, 9, and Grant, 4, better known as Goose. I like that nickname by the way, Grant. The boys, who always love to be on the water and fish whenever outside of the classroom, have recently discovered the joy of catching lobsters from the three traps they tend in nearby waters with their father, Adam, who holds a recreational lobster license.

“They wake up every day thinking about our lobster pots,” said Adam, who has provided them with a true appreciation of all that lurks below the surface. “They all love to eat lobster, Brooks in particular, but we throw back the females. We caught a monster-sized female today, but back she went.”

Nothing is finer than seeing kids appreciate the popular crustacean, but it’s even more significant that they respect that it’s best to return the females to the wild to help sustain the fishery. Nice going, boys.

Mashashimuet Park's History and Future
A Conference for Young People to Create Solutions
Get Outside, Get Moving
END_OF_DOCUMENT_TOKEN_TO_BE_REPLACED