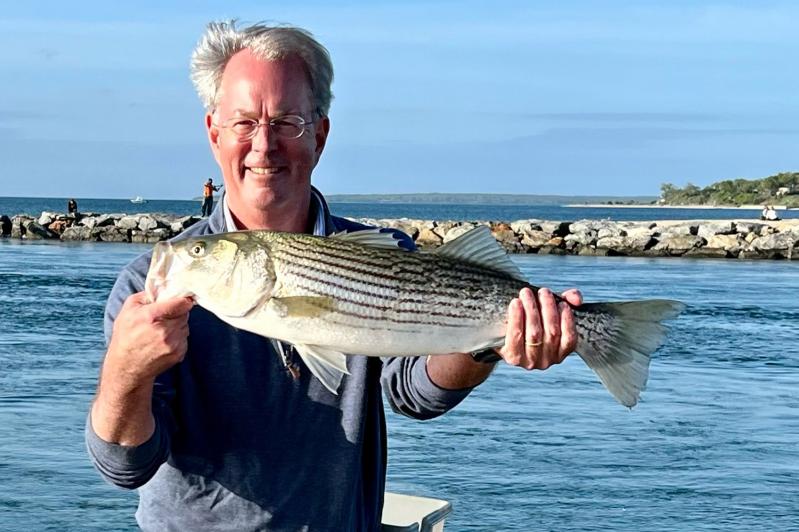 Friday afternoon, before I checked the strings of lobster traps I had set nearby a week earlier, I decided to try a few quick drifts for striped bass in Plum Gut. The bass, according to all reports I had received, have been running in great quantities in the narrow passageway of the turbulent water between Orient Point and Plum Island, at the easternmost extension of the North Fork.

As many savvy mariners know, Plum Gut is no picnic. The current that rages furiously midtide in the heavily trafficked sluiceway that serves as a gateway between Long Island Sound and Gardiner’s Bay can reach over five knots at times — and even more on the full moon.

The conditions, however, are at their worst when there is a strong wind against the tide setup. Under such a scenario, the seas will stack up, making safe passage a rather treacherous gamble for many boaters. By any measure, the Gut, as fishermen call it, is a wicked and dangerous body of water that can never be taken lightly.

A multitude of boats have foundered, and ultimately sank in the Gut, just to the east of the Orient Point Lighthouse.

The diminutive lighthouse, constructed in 1899, is affectionately known as the “coffee pot” because of its stubby and rather drab resemblance to an old-fashioned stovetop coffee maker. It has seen its fair share of boating mishaps and miscues. It was probably about 20 years ago that a car parked on the stern of the Cross Sound Ferry ended up being bounced off the deck, ultimately to be submerged in the waters of the Gut.

I was on a fishing trip out of Montauk on the Sea Wife IV with Capt. Tom Cusimano, when we heard the news of the car’s demise over the VHF radio. Thankfully, the owner of the vehicle was topside, but the car still sits 100 feet below the surface.

As for the fishing last Friday in the Gut, I was thankful that the conditions were rather benign. The action was slow when we arrived in the waning hour of the outgoing tide. We managed to hook into a 13-pound bluefish, which inhaled a diamond jig, but other than that, the fish were not on the feed.

Reeling in our lines and lures as the tide slacked, we headed eastward to check and rebait the lobster traps. However, upon coming up on the first set, we noticed a flock of gulls and terns diving and feasting lustily on baitfish. The commotion on the water was impossible to ignore, a clear sign that some unknown predators were on the feed.

“Get ready to cast the diamond jig,” I said to my deckhand, Ray, figuring it would likely entice whatever fish were pushing such bait toward the surface. Sure enough, it took only a few minutes before we were fighting twin bluefish in the 15-pound class. True heavyweights.

The marauding school of blues were feasting on anchovies in the crystal-clear 56-degree water. The four-inch, silver-sided baitfish were in panic mode, trying their best to avoid being sliced up by the razor-sharp teeth of the hungry bluefish. It was a classic display of the circle of life, courtesy of Mother Nature. We caught a few more blues and ultimately trapped about 10 lobsters that afternoon.

At home, the bluefish fillets would be cleaned, brined, dried, and hot-smoked under a combination of hardwood charcoal and apple wood shavings. The makings of such a creation would provide a fine breakfast treat served on a toasted bagel with whipped cream cheese. Few treats are better than such to start the day.

As for the lobsters, they made for a tasty meal steamed later that night, as well as for subsequent lobster rolls that were served over the next day or two. It was a fine day to be in the Gut.

Over at Mrs. Sam’s Bait and Tackle in East Hampton, the owner, Sebastian Gorgone, confirmed that bluefish have shown up in large quantities in many local areas. “They are just about everywhere, and some are really big too,” he said, smiling broadly on Sunday afternoon from behind his well-worn counter. Gorgone was equally enthused about the jumbo-size porgies that have shown up from Cedar Point all the way east to Gardiner’s Island.

“The porgies are really huge too,” he added. “They are running to over three pounds.” He noted that striped bass are still holding residence in Three Mile Harbor and along the ocean beaches. And for the first time this season, Gorgone had some good news on the fluke front.

“I was talking to some of the pound-set guys the other day, and they said that the fluke showed up in their traps near Navy Beach in Montauk, and days later they were landing them really well in the Accabonac area. So, by the time this paper gets to print, I’d think fishermen should try their luck, as it seems the fluke are finally moving in big time.”