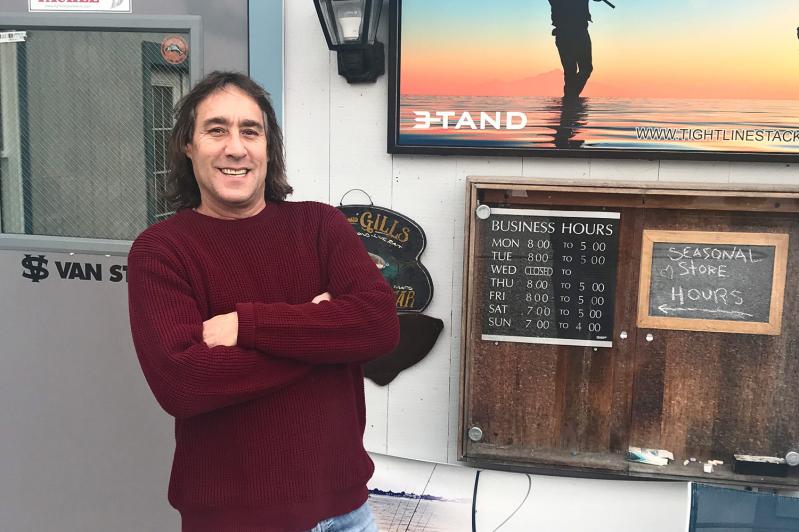 Ken Morse’s Tight Lines Tackle in Sag Harbor is stocked with everything a fisherman or woman could need, but its most valuable commodity may be the local know-how clientele get from the proprietor, who has been fishing in East End waters since he was a kid.
Jon M. Diat
By Jon M. Diat

If you are a tall person, you may have a bit of trouble navigating the interior of Tight Lines Tackle on Bay Street in Sag Harbor. It’s not that the ceiling is low, but rather that the longstanding establishment is jammed from the roof to the floorboard with just about every kind of tackle, apparel, and bait imaginable, making it a fisherman’s best friend.

Want an iron scallop dredge? Check. A lobster holding crate? Yep, it’s available. Need some live eels to catch that large striped bass on a full moon tide? They are swimming freely in a saltwater holding tank ready for purchase in the far corner of the shop. You name it and you will likely find it at Tight Lines.

“Over the years, the assortment of gear for anglers’ needs has expanded so greatly,” said Ken Morse, the shop’s proprietor. “It’s important that my customers, beginner or experienced, feel that their needs are being met and they’re well prepared for a great day of fishing. You also need to have a broad inventory at hand. I wish I had more square footage for what I want in the store.”

The son of a father who was a hematologist and a mother who was a prominent rheumatologist, Morse always had a strong interest in nature and fishing. He grew up on Manhattan’s Upper East Side and in Riverdale and attended the prestigious York Preparatory School, but spent weekends and summer months at his parents’ house on Dune Road in Westhampton Beach, where the fishing, clamming, and blue-claw crabs were always plentiful.

“My parents were in the medical field, but I never had a desire to enter it,” he said from behind the counter on a December morning. “I fell in love with fishing and nature at our place in Westhampton. You had the ocean on one side of the road and Moriches and Quantuck Bay on the other side. Fish were everywhere and the wildlife was amazing. You were never bored. It was an incredible place to be.”

Morse, who will turn 52 in January, picked up some of his passion for fishing from his father, who owned a small Cobia trihull boat, perfect for fishing the local bays and creeks.

“My father enjoyed fishing and being outdoors, but sadly he passed away when he was only 48 years old.”

After graduating from York, Morse attended Southampton College for two years before transferring to tiny Unity College in Maine, where he received a degree in ecology with an emphasis in marine biology.

“It’s funny, I really did not know what to do with my degree,” he recalled. “I worked a summer at the Morton Wildlife Refuge in Noyac, but I also worked a few summers in college at the old Bayview Tackle and fish store in Sag Harbor” — where Billy Joel’s house is now — “when Peter Wandel owned it.”

Morse continued working at Bayview after Lilian Woudsma took over the shop in 1993 and until the lease expired in 2000, before he took over the business, renamed it, and moved it to its present location, a former machine shop at the Sag Harbor Yacht Yard.

“I purchased the inventory of all the tackle and supplies over a five-year agreement,” he said. “The fish market business at Bayview was successful, but the zoning where I am now does not allow for such a market here. So that’s why I’m focused just on bait and tackle.”

Like operators of similar establishments on Long Island, Morse laments that staying in business gets tougher every year.

“There are less moms and dads taking their kids for a day on the water these days, and there are just fewer average fishermen around. Boats are expensive and many just don’t have as much free time to pursue it.” Morse also points out that increased fishing restrictions have cut down on sales, while some species, like winter flounder, which used to be one of the most popular fish to pursue in local waters, are practically nonexistent.

“It’s become a shorter season for me,” he said. “Flounder fishing used to start in March and go through May and that is no longer the case. Now, the first fish that show up are porgy and fluke and that does not start until May. So, I’ve really lost two solid months of what used to be very good income.”

Morse added that sales of fishing supplies and bait via the internet have also taken a large bite out of his income. “The dynamics in the business are changing. Online has hurt for sure. I used to sell a lot of gift certificates, especially around Christmas in the past, but that has declined as well.” Morse recently launched a newly enhanced website at tltackle.com.

“Hopefully that will bring some more customers my way,” he said. “Time will tell.” Morse, however, is grateful to the local Latino community, which he now estimates comprises upward of 40 percent of the sales in his store. “They are very avid and love to fish. I certainly have improved speaking Spanish over the years and I’m grateful for their support.”

When not at his counter at Tight Lines, Morse spends time at home on Big Fresh Pond in Southampton, where he lives with his wife, Elizabeth, and two daughters, Lacy, 17, and Thea, 13.

“I’m very proud of my kids. Lacy is graduating from high school in Southampton a semester early and will enroll in the spring for courses at Suffolk Community College, before she goes off to Louisiana State University next fall.”

“I’m excited for her,” he said with a smile, quickly adding that there is some excellent fishing in the Bayou State. “I plan to bring my fishing rod when I visit.”

Morse plans to keep his shop open in the winter months, albeit on a limited basis. “I also plan to attend a few fishing shows over the next few months selling stuff, plus perhaps find another part-time gig. I like to stay busy.”

In the meantime, Morse has been busy ordering new tackle to adorn the walls and shelves of his store for the 2020 season. “I just placed an order for a bunch of St. Croix fishing rods,” he said. “You need to stay on top of the latest gear that the manufacturers are coming out with. A better educated and equipped fisherman has more potential to have a successful day on the water than one who isn’t.”

“Maybe I should have gone into the medical field, as this is a tough business to be in. But I still love what I do.”