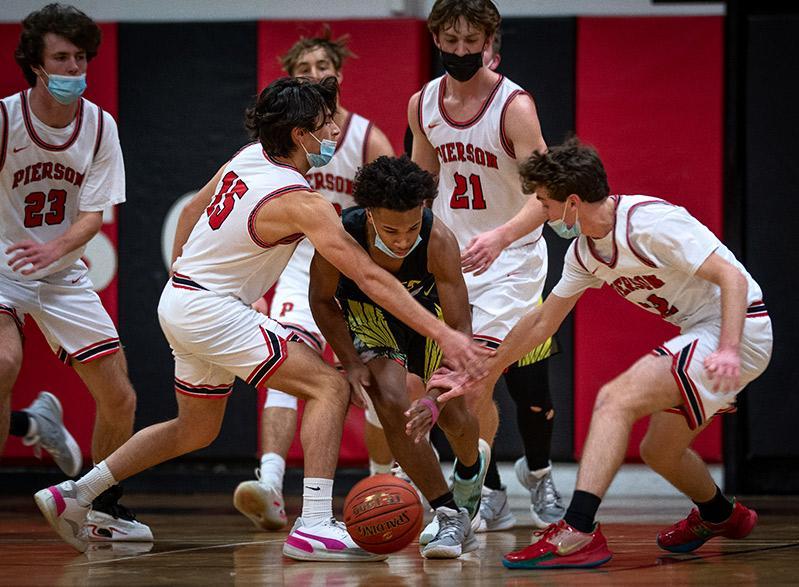 The Pierson (Sag Harbor) Whalers in action back in December.
Craig Macnaughton
By Jack Graves

The Pierson and Bridgehampton High School boys basketball teams won county classification titles Wednesday at Westhampton Beach High School. Pierson of Sag Harbor won the Class C championship by defeating Greenport, a team it had handily beaten twice before, 68-52, and Bridgehampton defeated Smithtown Christian, a team with which it had split wins during the regular season, 45-38.

The Whalers jumped out to an 11-0 lead and went on from there. The North Forkers tried mightily to get back into the game in the third quarter, and almost did. Going into the fourth, Pierson's lead had been pared from 15 to 7 points.

A steal and basket by Ev Corwin, the Porters' energetic senior point guard, cut that lead to 5 as the fourth began — a play the Porters' fans greeted with stomping and shouting — but Pierson came right back: Wilson Bennett, who was unstoppable under the boards and who finished with 24 points, made good on a third layup attempt, and after Greenport had missed from long range at the other end of the court, Brendan Burke drained a 3-pointer to kick the margin back up to double digits.

The Bridgehampton-Smith Chris game got off to a slow start, with both teams making good on only 30 percent of their shots from the floor in the first quarter, which ended with the young Killer Bees ahead 9-7.

Three layups by Smith Chris's big man, Diego De Los Santos, who had been 0-for-4 in the first period, kept the Knights close in the early going of the second, but he had to come out of the game — for good — when, with about four minutes gone and the Bees leading 14-13, he fell back on his head in grabbing a rebound.

In his absence, the Bees promptly went on a 13-2 run to take a 27-15 lead into the halftime break, and though there were some anxious moments for Bridgehampton's coach, Ron White, thereafter, his team of underclassmen, spurred on by his animated advice during succeeding timeouts, was to prevail.

A full-court inbounds pass from Kris Vinski to the unmarked Mikhail Feaster put the Bees up 43-35 with less than a minute left, and, with six seconds remaining, Vinski made two free throws to send Bridgehampton home a 45-38 victor.

Pierson and Bridgehampton are to meet in the county tournament's C-D game Saturday at noon at Sachem East High School. The winner will advance to the B-C-D game at Longwood High School in Middle Island on March 1, a Tuesday, at 4 p.m. That game's likely contestants will be Pierson and Southampton, the only team to top the Whalers in League VII play.