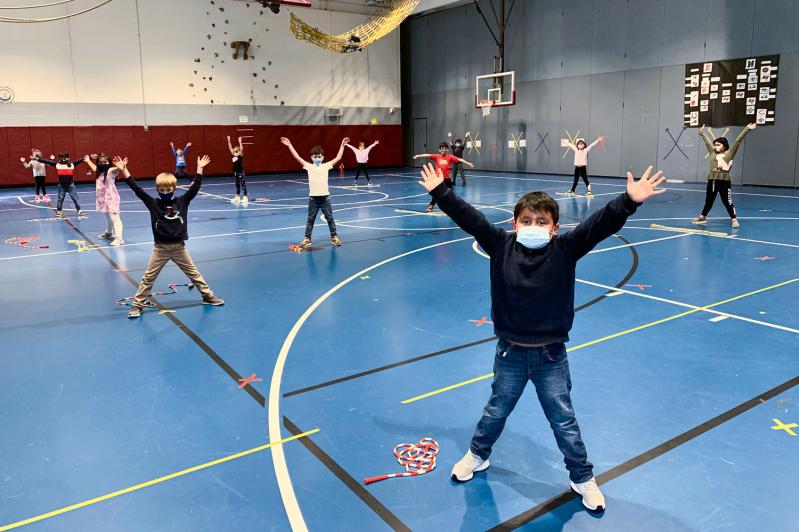 Students in a phys ed class at the John M. Marshall Elementary School had plenty of space to spread out. The challenge for teachers is finding fun activities that allow for social distancing.
Annemarie Brown
By Jack Graves

During the pandemic, physical education teachers here have jumped through some hoops in order to keep students safe while at the same time active.

"The third-through-eighth-grade kids aren't so excited about exercising -- they want games," Will Collins of the Montauk School said by phone not long ago. "So, we've had to get creative."

Thus, he and Kalie Peters Burkle and Nicole Dickinson, their "invaluable" aide, came up with a way to play lane soccer in the fall, "with team A in lanes 1 and 4 and with team B in 2 and 5, which kept them from swarming around the ball." And they also oversaw socially-distanced football games in which ball carriers were "tackled" with 52-inch-long "pool noodles."

Inside, said Collins, Tchoukball has been a hit. In the lively game, a ball is jump-thrown from various spots on the court onto a slightly-angled trampoline-like target whose rebounds must be caught by the opposing team before hitting the floor.

"There's no traditional in-your-face defense; the game lends itself to separation. You can see it on YouTube. Actually, we were playing this before the pandemic. It's super fun. The kids play it with their masks on," Collins said. "They wear masks when playing soccer and our version of flag football too."

In normal times, the day following Martin Luther King Day would have been the first day that Collins's boys volleyball team practiced. Instead, that day he was overseeing socially distanced one-on-one timed shooting contests with two players at each basket, each with a ball and aiming to outscore the other from "poly spots" with differing point values on the floor.

Leading up to the completion of the Bridgehampton School's first-ever regulation-size gym, Mike DeRosa, the school's athletic director and middle and high school fitness teacher, was working with students virtually and personally in small groups in the new fitness center whose equipment had yet to arrive.

In both virtual and in-person sessions, DeRosa's aim "is to get their heart rates up, to get the kids moving. . . . It's been a fitness-based year."

Tabata high-intensity interval training has proved to be helpful in this regard, he said, as have Zumba and Just Dance virtual sessions, which also have included combat workouts and yoga.

"Even though this year has been challenging, we have been able to make it great for the kids in P.E. classes," said Annemarie Brown, the physical education coordinator at the John M. Marshall Elementary School in East Hampton. "We have tried to be outside as much as possible."

A lined six-lane track on the school's field hockey field has been used frequently for staggered warm-up runs, and around it are various "par-course" stations of agility ladders, hula hoops, step-ups, and so forth around which small masked groups rotate to the accompaniment of music.

Dances such as the Cotton Eye Joe and the Cha-Cha Slide "have been taught to all the grade levels," said Brown, who, with her assistants Jessica Sanna, Joe DiGirolomo, Trish Erickson, and Rob Rivera, has also overseen lane soccer and soccer golf, with hula hoop "holes."

"For the students who are fully remote we created an interactive P.E. Google Classroom with fun online workouts and activities," she said, adding that, because of the periodic school closures here, all the elementary P.E. classes had been using Google Classroom for a time.

At the high school, Yani Cuesta, the girls track coach, has resorted to Zoom workouts whenever the school has been closed. When she uses Zoom, she said, "the girls do interval work in their backyards or in front of their houses. They show me snippets of videos with the distances they've run and their times. I need the proof because I want to keep them working a little harder than they would on their own. I don't want them just to run 15 minutes a day."