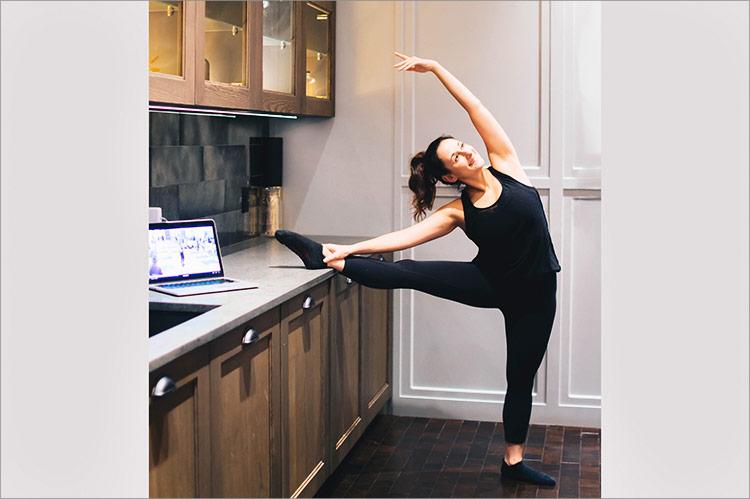 With locations in East Hampton and elsewhere closed right now, Elements Fitness Studio has moved many classes online to the Zoom platform, where people can follow along at home and stay connected to favorite instructors like Andrea Fornarola Hunsberger, the studio’s founder and director, above.
Leehe Bok
By Jack Graves

Fitness studios here have been offering online personal and group training sessions since the early days of the Covid-19 shutdown, and given the uncertainty of the coming months, they’re likely to continue doing so for the foreseeable future.

“We began incorporating Zoom sessions in the third week of March,” Gordon Trotter, MuvStrong’s owner, said this week. “It’s worked well, the feedback has been good. We’ve had fewer classes, but more people in them. . . . It’s been good for people to see each other and communicate. That’s been a big part of it.”

The sizes of MuvStrong’s Zoom group sessions have varied “from six to eight to as many as 36. . . . Our clientele numbered 140-odd before the shutdown. It’s about 180 now,” Mr. Trotter said.

No matter what ultimately happens, “we’ll continue doing classes online,” he said. “We want to keep people moving — it’s good for their health and for their immune systems.”

MuvStrong offers seven days of free access to its live online classes. Ten-day and 14-day passes are offered as well, with fees ranging from $39 to $99, depending on the number of sessions involved.

Philosofit has for the past several weeks been offering a free Zoom Pilates class on Tuesdays at 6 p.m. that has on average been attracting 40 participants.

Ari Weller, Philosofit’s owner, said the studio had been providing virtual training since it closed on March 17. “I’ve been as surprised as anyone at how transferable the integrity of the work has been. I’ve been doing this for one and a half months now, and it’s made me a better teacher. I have to be present nonstop. I can see when someone’s shoulder rises, if they’re holding their breath, if they’re gripping their toes . . . the only thing I can’t do is touch.”     At first, he said, the virtual classes had been offered to his clientele at a reduced rate, “but they said no, that they were happy to pay what they’d customarily been paying.”

Some of those clients are far afield at the moment, in California, in Florida, but the wonders of Zoom have enabled Philosofit to continue to train them.

Could it be better? Yes, Mr. Weller said, but he was counting his blessings. “It could be a lot worse — we’re not considered essential, fitness is considered a luxury. It’s not food, not gas. But we have a loyal clientele that likes what we do and has continued to support us.” He plans to continue with the virtual classes when the studio eventually reopens.

Caroline Cashin of Truth Training said the studio on Railroad Avenue that she and her husband, Ed, run has been offering classes via Instagram. The difference between it and Zoom, she said, was that “on Instagram you can see your instructor, but the instructor can’t see you. On Zoom, everyone sees everyone else, but you also have to pay to use Zoom.”

The Instagram classes have been successful, she said, averaging around 25 participants.

“We spent the second half of March planning. In April, we gave free classes, and Ed bought a coffee roaster and sold bags for $20 each. He donated the first $1,000 that he made to the East Hampton Food Pantry. We are charging $100 a month, but if someone can’t afford that, we’ll make an arrangement, absolutely.”

Her husband, she said, had been “super busy with one-on-one Zoom training.”

As for the future, Ms. Cashin said she didn’t know. “It’s unknown territory. Will people feel safe coming back to the studio? We’ll have to wait and see.”

Andrea Hunsberger, owner of the Elements Fitness Studio at 68 Newtown Lane, “quickly switched to Zoom classes when we were told to shut down in mid-March. . . . We’ve been giving a lot of free classes, trying to keep the community engaged, and I’ve think they’ve helped people stay in shape and keep their spirits up.”

Her ballet barre-based stretching and strengthening Zoom classes, modified “so they can be done anywhere,” were drawing 10 to 12 paying students, and, in the free classes, between 25 and 30, Ms. Hunsberger said. The free classes are given on Wednesdays and Fridays at noon. The studio offers private and semiprivate virtual training as well.

“We’re increasing our schedule — we’ll continue it [Zoom training] no matter what,” she said.

Jamie Lerner of Springs, who, before coronavirus, had given “core-plus” classes, emphasizing strength, flexibility, alignment, and balance, at the Body Shop on Newtown Lane, the Springs Presbyterian Church, and clients’ houses, took to Zoom in early April, though not so readily, inasmuch as she is a self-confessed “first-class Luddite.”

“When you called,” she said Monday afternoon, “I was actually giving a class. Usually, there are five to eight in it — I do them on Mondays and Thursdays at 4 p.m. — but today we were only five — six and seven having experienced ‘technical difficulties.’ ”

She was grateful, she said, that Zoom was an option. “My clients were at a loss initially, but, because of this platform, I’m available to them again and we can continue our work. It’s been great, it’s been wonderful.”

Spring Has Sprung at the L.V.I.S. Shops
An Online Auction for ARF
A Rescheduled Telephone Town Hall With Lee Zeldin
END_OF_DOCUMENT_TOKEN_TO_BE_REPLACED