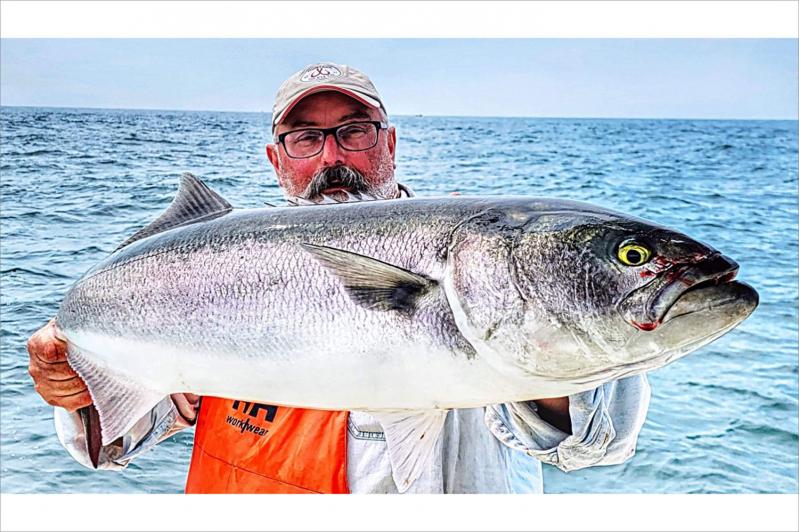 "Ugh, the weather was beyond lousy this weekend," sighed Ken Morse, the proprietor of Tight Lines Tackle in Sag Harbor on Monday morning, lamenting the strong northeast winds, combined with a cold rain, that started on Friday and unfortunately hung on until Memorial Day on Monday. It was a washout.

"It's unfortunate about the timing of this weather, as the past three or four weeks were just fabulous and the fishing was great," he said. "But the horrible conditions prevented just about anyone from venturing on the water."

On the bright side, there was a nice throng of people who showed up for the Sag Harbor Memorial Day parade despite the damp, chilly conditions. Even Billy Joel took in the ceremony from his second-floor deck overlooking Marine Park, where the Alexa, his 36-foot boat, is also docked. The Piano Man has owned the classic, downeast BHM boat for nearly 30 years.

Morse, who has been in business for just as long at his show at the Sag Harbor Yacht Yard on Bay Street, was equally dismayed at the drop-off in business he has witnessed this year.

At the start of the pandemic many people seemed to take up fishing or add more tackle and supplies to their kits, "as many were not working," he observed, saying that business this season is a quarter of what it was by this time last year. "So far this spring, I'm seeing fewer people fishing either from boat or from the shore, where there were many more wetting a line 12 months ago. Hopefully, that will change as we enter June."

Before the big blow, Morse said that fishing was excellent in local waters. Many species, including weakfish, bluefish, striped bass, porgy, and blowfish, were cooperative for those fishing with a hook and line.

"The weakfish action in particular was excellent," he said. "It's been the best I've seen in several decades." Morse recounted that two of his customers fishing in Noyac Bay caught 45 weakfish in 45 minutes in some frantic action. "They were fishing high-low rigs with strips of squid, and they even caught a few with bare hooks. Some of these fish were up to six pounds too." As a reminder, anglers are permitted to retain one weakfish over 16 inches per day.

"It was a washout at the worst time," agreed Harvey Bennett at the Tackle Shop in Amagansett, speaking of the unfortunate timing of terrible weather. "But when this weather passes and the seas settle down, things should bounce back pretty quickly."

Wearing a bright blue New York Islanders hockey sweatshirt on Sunday morning in support of the team's playoff series against Boston, Bennett also agreed that business has been soft this season, but he remains optimistic.

"Yeah, it's hard to figure out sometimes," he said, before scurrying home to watch the Indy 500. "Some days are better than others. Usually, Memorial Day weekend is pretty busy, but this was not the case obviously. I did have a steady stream of customers enter the store this weekend despite the crappy weather."

Bennett said that porgy fishing has been strong in Cherry Harbor and near Accabonac, and that bluefish can still be had at Gerard Drive in Springs as well as in the Napeague area. "The bigger blues have moved to the east out towards Montauk, but there are plenty around just about everywhere. Blowfish have shown up in Three Mile Harbor and the cinder worm hatch continues in the harbors, with plenty of small bass feeding on them."

Bennett added that while fluke fishing remains in the doldrums, a few nice-size weakfish have shown up. "Some of the fish were up to seven pounds. It's nice to see them around in greater quantities."

Over at Mrs. Sam's Bait and Tackle in East Hampton, the owner Sebastian Gorgone still had a smile on his face despite the lousy weather. "Hey, we had perfect weather for almost a month, so we were due for some rain. Plus, we really needed it as the ground has been bone dry."

"I had a few customers that still went fishing, but it was funny to see them dressed up like it was winter as it was so cold and raw," he chuckled. Gorgone said that fishing for porgies, striped bass, bluefish, and blowfish should bounce back quickly with the better weather this week. He added that blue-claw crabs have also started to emerge from their long winter slumber.

Out at Montauk, Capt. Savio Mizzi of Fishooker Light Tackle Charters said that fishing was "red hot" for striped bass, giant-size bluefish, and porgies before the northeaster. "The fish have been feeding on squid, white bait, and sand eels. It was nice to see such great action."

Mizzi, who is known for his art of using a bucktail jig to entice just about any type of fish, as well as a paintbrush for his colorful fish and nautical paintings and drawings, expects the fishing to bounce back quickly as the seas settle. "There is a ton of bait around, so the fish should still be around with even larger bass showing up."